My phone lit up with texts from friends recently when USAID Administrator Rajiv Shah mentioned our company, MANA Nutrition by name in an interview for a NY Times blog post about some changes to food aid in president Obama's FY2014 budget. The passing mention of us by the administrator was probably not noteworthy to anyone other than my wife, but what is noteworthy is where I was sitting at the very moment when the announcement was made. I was sitting in rural village in Malawi witnessing a miracle. The timing was impeccable because the miracle I was seeing at that moment was directly related to Dr. Shah's announcement. 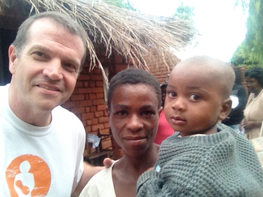 Not many miracles are verified with photographic evidence, but I managed to snap a picture of this one with my phone. Pictured here is Miracle Juma, a fitting name for a kid who is living and thriving today thanks to a rather simple yet miraculous food aid intervention made of regular peanut butter. It's called RUTF, Ready to Use Therapeutic Food, and it is one of the very interventions the President's new budget seeks to get to more kids who need it. Just in case you think I'm fudging on the name or the efficacy of the peanut butter, I snapped some shots of Miracle's official government records that show the incredible weight gain he experienced after just five short weeks on RUTF, Ready to Use Therapeutic Food. This impact has been well documented for years, not only by guys like me but by seasoned health experts from groups like Doctors without Borders who used the exact same language in calling RUTF a "revolution in nutritional affairs" a few years ago on CBS's 60 Minutes.

The convergence of those two moments - a NY Times mention by the USAID director and the opportunity to look directly into the eyes of a grateful mom with a healthy child were a big deal for us at MANA where we have grown accustomed to the relatively quiet life of making and shipping our special peanut butter. But such obscurity is not ok for young children like Miracle. Millions like him live and die quietly in developing countries every day due to malnutrition. Malnutrition and the complications that follow, team up as silent killers, claiming more lives than the infamous killers of Malaria, TB and AIDS. In fact, malnutrition claims more young lives than all three of these tyrants combined.

So when Dr. Shah talks about US food aid and reform, he is talking about both a deadly serious subject and an amazingly hopeful one. Few voices on either side of the aisle think we should seriously cut out the food assistance we give to the world. It has never been a big enough part of our budget to make for any serious savings were it to be chopped. In fact, while most of us have never heard of it, Shah oversees a program called "Food for Peace," a program that has been around since the Kennedy administration quietly and consistently saving millions of lives. Yet while no credible voices are calling for elimination of our aid, there are plenty of opinions about how to do it better and accordingly plenty of opposition to the proposed changes in the president's FY 2014 budget.

The biggest opposition will come from three groups MANA knows well and could not do without - farmers, shippers and NGO's. All three have valid concerns and it will take some give and take on all sides if the President's proposals for food aid reform are to happen on any scale. Right now, the most productive farmers in the world are able to normalize their markets to some extent by relying on the US government to buy a certain amount of their crops... corn, soy, wheat, rice, etc and then literally ship those crops to hungry people around the globe.

While this group of partners does an admirable job of getting the food out, even the most conservative estimates say an additional 2 million children (and maybe even 4 million) could be helped if we made the changes the Obama administration is suggesting. Those changes include fewer US-based commodity purchases and more in-country or in region procurement of food and sometimes using cash (debit cards) and vouchers, as well as more value - added assistance in the way of the actual food we ship. Obviously people and companies who stand to be affected by any changes will pipe up with their concerns, but it strikes me that much of the conversation around food aid reform dwells on the politically charged and divisive language about "reforming an antiquated system" rather than the two million additional hungry stomachs that will be filled. While the prospect of fewer shipping containers leaving our ports is not great news for some of our farmers or shippers, feeding more kids is excellent news.

It's easy for me to like this reform because our company (a non-profit by the way) as well as our area of South Georgia will benefit. But it's worth pointing out that I don't come from a crowd who has no sympathy or respect for the system as it stands. I grew up on a rather odd, suburban vegetable farm in Michigan and know first hand how hard it can be to be one of the very few American families trying to feed the rest. I also spent 10 years of my life working in rural Uganda for an NGO and saw first hand some of the finest people and biggest hearts laboring away in complete obscurity in rural Africa. To be sure, strategic and well-placed food aid is a good thing and in many places is the only thing between life and death. That's why I think the Obama administrations proposal to reform, make more flexible, but not eliminate the food program, is a fair, thoughtful and reasonable place to start.

While smart and thoughtful people on all sides of this issue will no doubt engage in impassioned debates on the implications, I hope that the majority of Americans who have no dog in the hunt will side with Dr. Shah and his team. Policy debates are one thing, but in the villages of Malawi and Ethiopia there are mothers who live on a fine line between life and death and who are desperately praying for their own little miracles. Sitting with one of them last week reminded me that if these reforms happen, there are potentially two million little miracles waiting to happen as well.