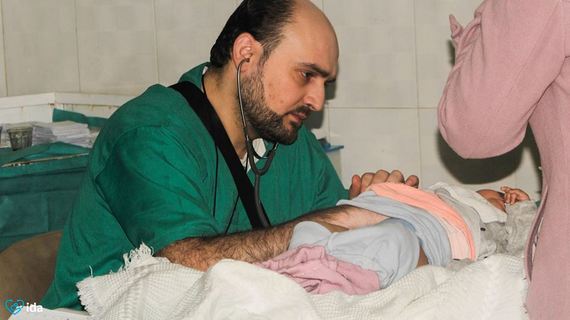 If you're reading this it means you're somewhere safe where there aren't airstrikes going on in the background or drone attacks -- or maybe there are shots fired and there is still a secure wifi connection -- either way I am thankful for the internet.

It's easy to often lose sight of that first letter in the alphabet.

Because we often forget the first things we learn as we proceed to move on to learn greater and more complex things. But every word in the alphabet matters, and words can only be created when we use the full alphabet. Likewise every city affected by conflict matters. One such example is Aleppo in Syria -- where a few days ago, Dr. Mohammed Wassem Maaz, one of the last paediatricians in Aleppo, was killed in an attack on Al Quds Hospital. He was so devoted to his patients that he stayed in Aleppo even after his family left for Turkey.

According to MSF (Doctors Without Borders), in 2015 alone, there were 94 attacks against 63 hospitals that they supported in Syria. In this year alone, they have had 11 attacks against hospitals that they have supported. So clearly there's no distinction being made whatsoever between what should be protected under International Humanitarian Law as a medical facility, and what would be a legitimate target to attack in war.

It's easy to often think that superheroes only wear capes.

Because the human brain likes easy. But fortunately enough it doesn't learn through easy. It learns through difficulty and challenges as new neural circuits are formed every second -- as we proceed from one task to another and learn a skill or recall some information or connect some dots that we couldn't link together before. One such example are doctors and nurses. They don't wear capes but they wear scrubs and cease to have a life to save the lives of others. Because that's what heroes do.

Against all odds they decide to dedicate themselves to the services of others. After spending tireless days and nights and years learning body parts they can't even pronounce, to healing them whilst being on call they make a choice to live this superhero lifestyle with minimal sleep and maximal healing -- for the rest of their lives. But that is the beauty of medicine -- getting a chance to make this choice of healing over harming.

And so even though the hours are long and the days are tough, the adrenaline rush kicks in when they see that heart monitor working again and the patient's vitals restoring or when they realize that they made the right incision in time or delivered your breach baby or when they see that child smile and hug them after dental treatment -- because they have created a bit of magic in this muggle world.

But in this world if you are a medical student, an intern, a doctor or any other healthcare professional -- although you are known to be a wizard for your expertise, you are often not consulted on anything outside your domain. Because how could a doctor influence the world at large, right? Wrong.

Well that's not how magic works.

Because being human far supersedes political and geographic borders. And because being a doctor is primarily about being a human -- just with some extra knowledge on fixing the human body -- fixing people and lives. Whether it be as a junior doctor in the NHS fighting for fairer treatment at the hands of domestic politics or a doctor in a conflict zone carrying babies in incubators to safety during shelling in a hospital at the hands of international politics.

You still wear the same scrubs and you are still the same superhero.

If you are a medical professional --know that your voice matters outside the operating theatre and into the cinema theatre and beyond.

"At the bed of the first injured child, the female doctor explains, "Both her legs and her hands are injured. There is a fragment inside her brain. She had surgery, and now she is in the intensive care." "Her situation is very dangerous," an older nurse says. "She could be dead any minute."

"In another bed, the third child (a three year old)'s head is wrapped in bandaging. Her case is critical, Ali tells me. She lies still, her only movement from the mechanical ventilator."

You don't need to imagine this. It really happened. Voldemort(s) are as present in the muggle world as they are in the wizarding world.

But as survivors, lucky enough to be alive -- you have the power of life. And with that comes your active citizenship responsibility. You have the power to use your voice to influence the headlines on timelines that cease to make media headlines. You have the audacity to call out the UN Security Council and its permanent member states who are involved in these heinous attacks to uphold the International Humanitarian Law without cartoonizing their existing veto power. You have the freedom to express your voices on platforms and arenas that are available to you at the click of a finger.

Because you survived. You are a boy or girl who lived.

Such attacks that go unheard or unnoticed such as attacks on health facilities and the denial of healthcare services as well as medical equipment are not only a blatant violation of International Humanitarian Law, but deprive families and communities of essential health care when they need it most. The type of services you take for granted everyday because you have survived.

After all, in this muggle world -- we can decide to be either wizards or death eaters. And making that choice depends on if you can trump love with hate. Because tiny boys and girls in conflict zones may live because of the strength of your love that is translated into action by moving -- shaking and -- creating chaos for change from No. 10 Downing Street to Tahir square. Because the strength of love for humanity has powers that defy the unforgivable curses of loss of willpower, torture or killing.

We need armies of peace (both online and offline) who use soft power around roughened edges. We need Gandhis and Mandelas who blog and snapchat with bulletproof vests lined in compassion and empathy. Those individuals can be any of you. And upon resistance, we need to kill with kindness. Because I know you know that peace heals -- always.

So use every word in the alphabet to create sentences that matter.

Start with the first letter in the alphabet. It's A for Aleppo.

From a Dental Student,