How many House seats will the Republicans gain in 2010? To answer this question, we have run 1,000 simulations of the 2010 House elections. The simulations are based on information from past elections going back to 1946. Our methodology replicates that for our ultimately successful forecast of the 2006 midterm. Two weeks before Election Day in 2006, we posted a prediction that the Democrats would gain 32 seats and recapture the House majority. The Democrats gained 30 seats in 2006. Our current forecast for 2010 shows that the Republicans are likely to regain the House majority.

Our preliminary 2010 forecast will appear (with other forecasts by political scientists) in the October issue of PS: Political Science. By our reckoning, the most likely scenario is a Republican majority in the neighborhood of 229 seats versus 206 for the Democrats for a 50-seat loss for the Democrats. Taking into account the uncertainty in our model, the Republicans have a 79% chance of winning the House.

The model has two steps. Step 1 predicts the midterm vote division from only two variables -- the generic poll result and the party of the president. With this estimate of the partisan tide in place, step 2 forecasts the winners of 435 House races using separate statistical models for open seats and races with incumbent candidates. At each step, the forecast takes into account uncertainty about the inputs.

First, we simulate 1,000 separate outcomes of the national vote. The pooled generic polls
conducted 121 to 180 days in advance of the 2010 election show a very close division of 49.1% Democratic and 50.9% Republican. But a near tie in the polls in mid-summer projects to a significant vote plurality for the Republicans in November, close to a 53%-47% split. This prediction is not due to any bias in the polls, but rather stems from the electorate's tendency in past midterm cycles to gravitate further toward the "out" party over the election year -- ultimately gaining about two extra points beyond what summer polls would otherwise show.

The national vote only tells us part of the story, and we still need to determine how it would translate into seats. For each of the 1000 simulated values of the national vote, we simulate the outcome in 435 congressional districts. Open seats and incumbent seats are treated separately. Open-seat outcomes are estimated based on the simulated national vote swing plus the 2008 presidential vote in that district. Outcomes with the incumbent on the ballot are estimated based on the simulated national swing plus the incumbent's vote margin in 2008 and whether the incumbent is running as a freshman. The weight that these variables are given in predicting the final outcome depends on their explanatory power in past elections. Full details are presented in our forthcoming PS paper. 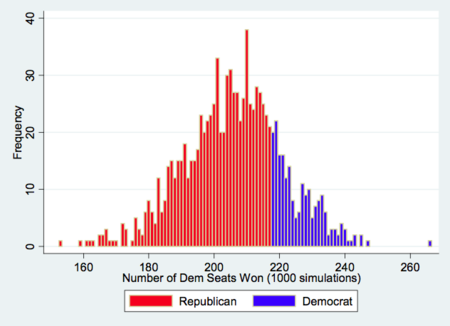 This prediction comes with important caveats. Applying our model to 2010 assumes that the forces at work in 2010 are unchanged from past midterm elections. However, we should be wary of the possibility that the underlying model of the national vote works differently in 2010 or is influenced by variables we have not taken into account. Because the 2010 campaign started to heat up earlier than usual, the usual tilt toward the out party may already be complete, with no further drift to the Republicans. It is also uncertain how voters will react to the tea-party movement as the public face of the Republican Party.