"Pranay, like it or not, you will be a gringo in India." Dr. Guerrant warned me as I got ready to fly to India for a global health rotation. Gringo is the picturesque Latin American term for foreigners. I felt outraged. After all, I am a passport carrying citizen of India! Born in humid Kolkata and raised in the dry heat of New Delhi, I pish-poshed his advice. So what if I had spent my entire adult life studying in America? I was still bristling at Dr. Guerrant's warning when I boarded the bus that morning. 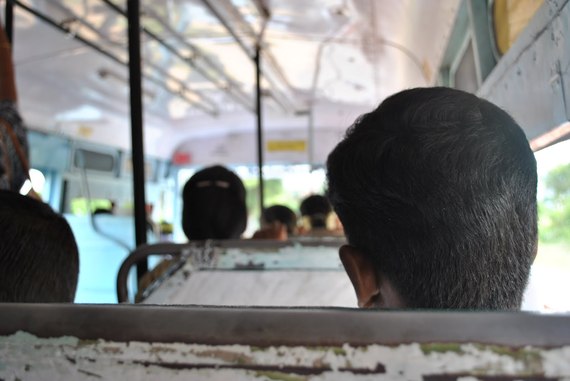 After tossing three well-worn one rupee coins to the conductor, I curled myself into a window seat. I say curled because it is impossible for anyone taller than 5 feet to sit in those seats without an impressive display of contortionism. Reading on the bus is almost impossible; the jerks feel strong enough to rearrange one's visceral organs. If this were not enough, the imaginative interpretation of traffic laws by most bus drivers is sufficient to reacquaint any traveling atheists with the deities they staunchly deny.

The imaginative interpretation of traffic laws by most bus drivers is sufficient to reacquaint any traveling atheists with the deities they staunchly deny.

Five minutes into my jangly bus ride, I saw a lady, in a gorgeous saffron sari squatting behind a small bush. She was defecating. Seeing the bus approach, she made a few perfunctory moves to conceal herself, but she knew as well as I that it was futile. I averted my gaze to give her some privacy. Though I had seen similar sights hundreds of times before, it shook me up in a way that the bus could not. I was struck by how different my India was than hers.

You know you've been left out of the prosperity party when you cower behind bushes as you carry out you basic bodily functions.

A vocal minority of Indians boasts of overtaking China's economy soon. We have come a long way from being an impoverished British colony. Middle-class Indians like me suddenly have the capacity to patronize brands such as Bvlgari and BMW. But you know you've been left out of the prosperity party when you cower behind bushes to carry out basic bodily functions. This is the case for more than six hundred million people in India who do not have access to bathrooms. That's twice the population of the United States! Structural violence and institutionalized inequalities underpin these disparities.If we prosperous Indians allow the creation of a permanent economic underclass, won't our democratic claims ring unforgivably hollow? Won't history judge us harshly for this denigration of our fellow humans?

"Doctor sahib, can you help me?"

My reverie was suddenly broken by my young co-passenger who had had spotted my stethoscope. I clarified that I was a lowly med student, but agreed to look at a leg wound that he wanted to show me. The wound was crusted with matted mud and some dried exudate. A fly promptly buzzed onto and began feasting on the grime. I waved the fly away with my hand and suggested some simple wound care and tetanus prophylaxis to the boy.

Sometimes, Indians communicate more by jiggling their heads than they do through their words. There is the ready sideways head-jiggle of the Indian who is on the same page as you and then there is the slow, tenuous cranial swaying of the Indian who is mystified, but too proud to admit it. From the amplitude and frequency of the boy's head, I could tell that my vocabulary and accent were impenetrable for him. My English3 is inspired by Oscar Wilde. His was inspired by necessity. I broke into Tamlish (a hybrid of Tamil and English) and descriptive gestures to communicate with him. 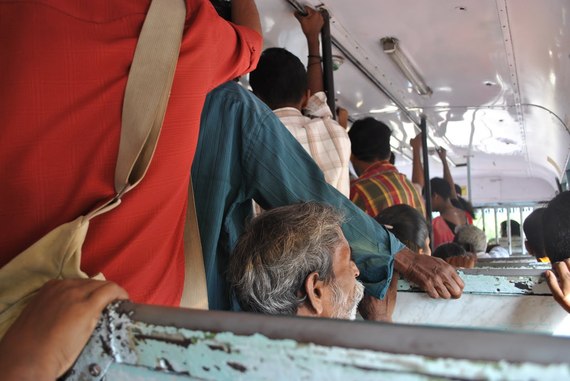 As I clumsily counseled the boy with broken words and jerky gestures, I felt a sickening twinge: I truly was a gringo. For all intents and purposes, I spoke, a different language than the majority of Indians. The rupee had a completely different meaning for me. The three rupees I had paid thoughtlessly to the conductor were almost ten percent of the daily earnings of millions of Indians who subsist on 99 cents a day. I even look physically different from the millions of Indians who are stunted by malnutrition and chronic disease.

In that moment, I resented and despised everything from my expensive education to my posh-sounding accent. They were exposed as the products of inequalities deeply ingrained in Indian society, the same inequalities I vehemently decry. I felt like I had somehow swindled the man next to me.

Gringo or not, I have the capacity to advocate for my voiceless Indian brothers and sisters.

I stepped off that bus shaken. But as I crossed the street, dodging bicycles and bulls, I felt a glimmer of hope. My brain was unimpaired by malnutrition. My education hadn't been discontinued at an early age due to lack of funds. My body was not crippled by preventable diseases. Gringo or not, I have the capacity to advocate for my voiceless Indian brothers and sisters. This would be my atonement.

I think back to that bus ride often and it always reaffirms the priorities that have become my north star in the years since.