The French countryside is littered with historic castles, palaces and chateaux, the most famous of which is Versailles. But there is another chateau, Vaux Le Vicomte, that is not as well-known but figures prominently -- and tragically -- in the history of Versailles.

Vaux-le-Vicomte was the dream of Nicholas Fouquet. At 26, he was Louis XIV's superintendent of finance and a well-known patron of the arts. He was also very wealthy. 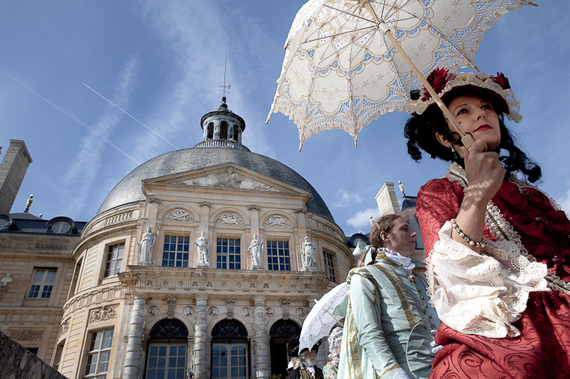 In 1641 Fouquet bought a huge parcel of land about 35 miles southeast of Paris. He intended to build a chateau the likes of which no one in France had ever seen. To that end, he bought and then demolished three villages and leveled an existing chateau. Beginning in 1658, he spent untold millions and employed an estimated 18,000 workers over a period of four years to complete the job.

When it was finished, Vaux-le-Vicomte was indeed a sight to behold, a lovely, Baroque chateau that became the birth place of the style known as the "jardin a la francaise." It was the perfect blending of architecture, landscaping and interior design.

Fouquet wanted to celebrate the chateau's completion and impress the king, so he decided throw a party on the night of August 17, 1661. Louis XIV agreed to attend.

The day-long festivities included a formal candlelight dinner served on solid gold plates, as befits a king, a play especially written for the occasion by Moliere and a huge fireworks display.

But the king was not amused. The next day, to the shock of everyone, he had Fouquet arrested. No on knows exactly why Louis XIV did it, whether out of jealousy or because of some murky court intrigue.

Fouquet's belongings, the sculptures, the paintings and the tapestries, were either bought by Louis XIV or simply appropriated. Even the orange trees that were planted in the garden were dug up and removed.

The king then hired the three men most responsible for creating Vaux-le-Vicomte, the architect Louis Le Vau, the landscape architect Andre Le Notre and the interior decorator Charles Le Brun, and commissioned them to build an even bigger, grander chateau on the site of his hunting lodge in Versailles.

After Fouquet was jailed, his family was forced to leave the property. Ten years later, the chateau was sold and over the years a series of owners tried, but failed, to restore it to its former glory.

Then, in 1875, a wealthy sugar merchant named Alfred Sommier bought the property. He was determined to make it what it once was. Gradually, Vaux-le-Vicomte began to look like what Fouquet had envisioned, and the descendents of Sommier have taken up the task with gusto.

Today, the restoration of Vaux-le-Vicomte is about 80 percent complete. Using old engravings and drawings, the current owners have been able to recreate the look of the chateau as it was in Fouquet's time.

The rooms are once again filled with magnificent art, tapestries, sculptures and period furnishings. The owners have even created a video that shows what court dancing might have been like in the time of Louis XIV.

The gardens, stretching a mile-and-a-half from the main house, have been groomed and restored, and the two rivers that bound the property once again feed the moat, reflecting pools and canals.

Several modern-day movies have even used Vaux-le-Vicomte as background. In "Moonraker," the evil Hugo Drax, James Bond's archenemy, called it home, and the chateau has appeared in "Marie Antoinette," "Valmont" and a host of television productions.

Nicholas Fouquet died in 1680 in prison. He never lived to see his beloved Vaux-le-Vicomte again, but his dream lives on.