As the opening of The Track at Saratoga, America's Grandest Race Course unfolds, tales of the lure of Saratoga -- the setting, the characters, the horses and the legends -- are promised. By the time the closing credits roll, the tales are told, the promise fulfilled. The hourlong documentary, celebrating 150 years of thoroughbred racing at Saratoga, whizzes by in a blend of history, reminiscences and visuals that raises the bar for the genre.

The brilliant first scenes detail the inaugural 1863 races by using stunning three-dimensional representations. There are no documented photographs of those first races; they were run in an era on the cusp of photojournalism. Instead, Saratoga Springs-based producer Patricia Lane, Elevation Films and Marty Bohunicky, Erik Sacino and the crew from Working Pictures drew from source materials to conjure evocative imagery for this WMHT-partnered production.

Emmy- and Tony-award winner David Hyde Pierce narrates throughout, engaging viewers with his familiar nuance, ably chronicling the rise of what is now America's oldest sporting venue. By the way, Hyde Pierce is a native son of Saratoga Springs, beginning his performing career as a church organist and on the high school stage.

A cast of racing personalities propels the story of Saratoga. Tom Durkin, Saratoga's race caller and ebullient fan, shares his first visit, when as very young men, he and his buddies hit the road from Illinois for an overnight trip to see the Travers Stakes at Saratoga ... all under the guise of a fishing trip. Too bad he left the Travers program in his parent's car ... "Busted!" Later on, Durkin describes calling the race when the crowd's roar shook the rafters of Saratoga's Clubhouse. 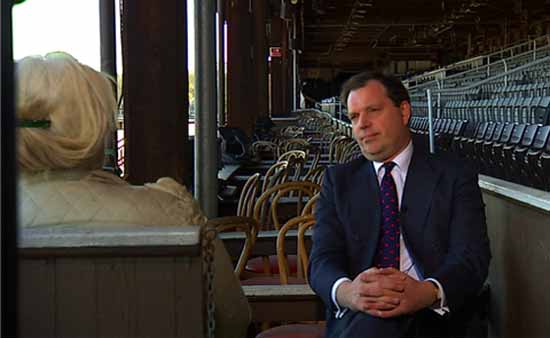 Paul Roberts consults at racing facilities across the globe. Much like Alistair Cooke on Masterpiece Theater, Roberts offers us his worldly perspective - the facilities and customs of Saratoga Race Course are unique and need to be cultivated as the times and demands change. Who knew that the architectural influences for the Saratoga's iconic grandstand came from Boston?

Although just a lad when his father's homebred Native Dancer ran at Saratoga, Alfred G. Vanderbilt III gives a sense of what it was like to be, well, a Vanderbilt in racing's 20th century heyday. Vanderbilt is the sixth generation of his family, starting with Cornelius "Commodore" Vanderbilt (a founding member of the Saratoga Association), to attend the races at Saratoga. And Native Dancer? He ran at Saratoga four times as a 2-year-old, winning the Flash Stakes, Saratoga Special Stakes, the Grand Union Hotel Stakes and the Saratoga Special Stakes. He came back the next year to win the Travers Stakes.

Nick Zito, Bill Mott and Todd Pletcher, all three Racing Hall of Fame members, confirm what every racing fan and track-rat knows, admit it or not, a win at Saratoga carries more weight and prestige than wins at other tracks.

That the Saratoga Race Course reigns as the oldest sporting venue in the country is testimony to the determination of founder John Morrissey, who after the first successful race meet reached out to a coterie of high stakes businessmen and horse owners to form the Saratoga Association. The Association guided the race course through expansion, mismanagement, wars, the criminalization and decriminalization of betting and bookmaking, until the 1950s when Saratoga became part of the New York Racing Association. Today, the Saratoga Race Course routinely outdraws NYRA's downstate tracks, Aqueduct and Belmont, and is the jewel of New York racing.

About 50 years ago as Saratoga was celebrating 100 years of racing, Red Smith, America's leading sports writer, advised to get to Saratoga, "From New York City you drive north for about 175 miles, turn left on Union Avenue and go back 100 years." For the next 50 years, may The Track at Saratoga, America's Grandest Race Course take up that mantle and make it manifest with images and words.

To watch The Track At Saratoga check your local PBS listings, or trot yourself over to WMHT to purchase the DVD or live stream the program.