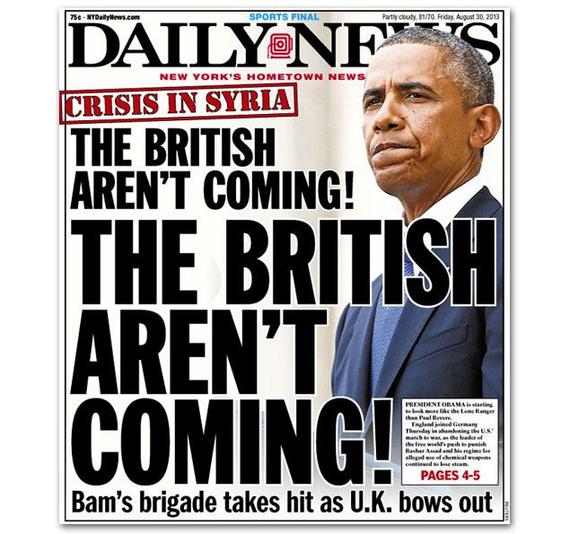 The British aren't coming... And apparently neither is anyone else.

The newspaper business is dead.

Yesterday, Cablevision offered to buy The New York Daily News for one dollar.

And I don't mean one copy of it. I mean the entire business.

For people of a certain age (or profession -- i.e., journalists), this kind of news is nothing short of unbelievable.

There was a time when newspapers were the powerhouses of the media world -- and licenses to print money.

They have been destroyed by technology.

That's how it happens.

One day, you're Blockbuster. The next, just busted.

But, if this is true (and I am pretty sure it is), what then is the future (if there is one) for journalists and journalism?

What journalism is experiencing is the full blown force of what Joseph Schumpeter called Creative/Destruction. That is, that the arrival of new technologies destroy old businesses (i.e., automobiles to horse and buggy business), but also create new ones (i.e., gas stations, Holiday Inns and car dealerships, among other things like suburbia.) As a rule, the future is brighter than the past. OK. You get the "destructive" side, but where's the "creative"? To get there, you have to do two things:

1. You must cease clinging to the past.

2. You must look at the technology clearly, leaving all your past pre-conceptions behind. If you are smart and you listen carefully, the technology will tell you what to do.

And in the case of journalism, what is the technology telling us to do?

Most media companies understand at least that they have to do "something" with the Internet and the digital revolution. Alas, most of what they do is jam old wine into the new bottle. TV everywhere, or slap their newspaper online. Take a look at any newspaper's website. What do you see? Basically, a print newspaper on your screen. With all the things the web could do and can do, all they can really imagine is moving the same exact product from a piece of paper to a screen. Not very good "listening" to the technology.

But, if we look at media companies (i.e., companies that gather and process information) that are pure children of the web, we get a very different architecture.

The list is endless. But they all have one thing in common -- their architecture.

What do I mean by that?

The architecture of traditional media companies is all the same -- all derived from a technology that is now dead. We make it -- you read it, or watch it, or listen to it. From one to many. No matter if they are newspapers, magazines, TV news, radio. It's always the same. Great really for 1930s tech.

But if we look at the new online companies above, (with some massive valuations) their basic architecture is very different from the old model, yet all the same. In those case, from eBay to Facebook to Uber to Twitter -- all the same basic model. They aggregate as much stuff as they can from as many sources as they can - they don't really care whom. It's a free and open market. In fact, the more sources the better.

Then, they deliver that massive ocean of stuff to another massive ocean of end users. From the many to the many. Instead of putting themselves at the top of the pyramid and parsing out content that they have made at great cost, they instead facilitate the billions of interactions between those making content and those who want to get it -- no matter what it is. And clearly, the more stuff they have to offer, the more interesting the site is.

eBay would not be very interesting if there were an Executive Producer for content. "We're going to do dolls at 9 a.m. and then clocks at 10 a.m."

Now, with 3 billion smart phones in 3 billion hands making a LOT of content all the time for free (and admittedly of a wide range of content), would it be possible build an eBay for journalism? That is, something that at the top offered lots of content and at the bottom attracted lots of interested users. And then, the business, instead of sitting at the top passing out certified information, would instead place itself at the nexus of these two very different yet mutual interested groups?

I think this could be a very workable and profitable model for journalism for the 21st Century.

For the first time.

Will someone build it?

But I can tell you who won't be building it.

It's too late for them.

And now the clock is ticking for all the rest.