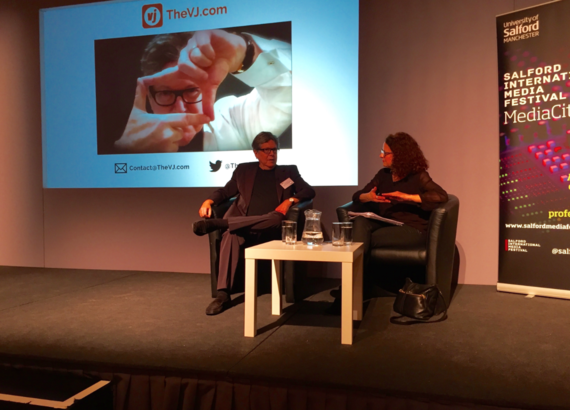 Laying out the idea at Salford Media Conference this week

When there were only three networks, there was a role for Public Broadcasting -- PBS in the US. In Britain, there was ONLY public broadcasting once -- The BBC.

Today, there are hundreds of channels -- and millions once online video really takes off. Is there any longer any purpose for public broadcasters? There are plenty of channels to choose from -- infinite once you include Amazon, Netflix, Apple TV (and we're just getting started with those).

Yes, The BBC makes some great programs -- period dramas, documentaries, news. It certainly has a role as a produce of content -- as a production studio, but frankly (and since they don't even sell ads), what is the point of having a public broadcaster? Who cares if you watch Blue Planet on PBS or The BBC (where its free) or on National Geographic (where they actually PAY The BBC for their work!)

If we don't really have a broadcasting role for PBS or any other public broadcaster, then what are they good for?

Not educational broadcasting (which tends to be rather unwatchable), but rather educating the public in what we might call television or video literacy.

Places like PBS or The BBC are filled with very very talented people who know how to make great and compelling video content.

There was a time (not so long ago), if you wanted to make TV, PBS (or The BBC) was the best place to go. Why? Well, no individual could possibly afford to buy broadcast quality camera gear, CMX edit suites and all the hardware you needed to actually produce a TV show.

Today, all you need to do that, really, is an iPhone and a laptop.

And there are 3.5 billion people on the planet with smart phones. That means there are 3.5 billion potential producers of television content. They are free to make anything that is in their heads. This is the video analogue of JK Rowling, unemployed mom on welfare starting to write Harry Potter on a napkin in a coffee shop.

Millions if not billions of potential JK Rowlings of video, all waiting to be unleashed.

What those billions don't have is the training in video literacy. How do you do this? What makes a great story. What do I shoot. How do I get started.

Think of this as the population of Europe the day after Gutenberg invented the printing press. They had all the gear -- but still no idea.

What Public Broadcasting could do is to become the video education center (or centre as we say at The BBC) for the world. Like the monks in the pre Gutenberg world, they have been tiny islands of literacy in a sea of illiteracy -- video illiteracy. This could be the greatest revolution in creativity in 500 years. As anyone at PBS or The BBC can tell you, great storyteling in video is more than just pointing a camera at someone and hitting the record button. It takes a certain skill -- in writing, in videography, in editing.

The tools to do that are in 3 billion hands. What they are lacking is the training. This is a task worthy of public broadcasting. A far more noble task than producing Dancing With The Stars.

You can read the complete blog, and others at TheVJ.com