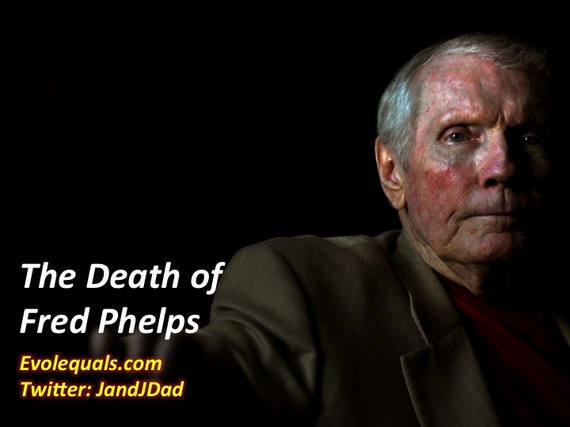 I have been fighting for LGBT rights for a long, long time. Fred Phelps was not always in that fight, but it feels like he was. It feels like he has always been and always will be anti-gay hatred personified.

He was not a contributor to the hardest time of that fight, which was not the recent battles for marriage equality. It was during the escalation of the AIDS crisis. While so many of my wonderful friends became instantly sick and dying, the public landscape was filled with squeaky-clean-looking politicians and evangelicals who casually ignored or demeaned us. Our challenge as a community then was not to be embraced or given equality; it was to gain a modicum of dignity and respect. He was inspired by that lack of respect and sought to capitalize on it.

The '90s arrived. Progressive gains were in process, but the going was still painfully slow. Then an event occurred that was so graphic and raw that it not only tore at the heart of the LGBT community but caught the attention of the mass population in a way that hundreds of thousands of deaths of gay men had not.

A young man named Matthew Shepard was beaten and found crucified on a Wyoming fence. He later died of his injuries.

The shock and horror of Matthew's demise was magnified by what -- or, more to the point, who -- came next: Fred Phelps.

Phelps and his Westboro Baptist Church were opportunistic. The high profile of the Matthew Shepard case was the perfect chance for them to grab the notoriety they craved. While the nation reeled in shock, the Phelps clan picketed Matthew's funeral and proclaimed that the young victim would burn in hell. We had not seen such bold insensitivity on the part of the homophobic voice before, and it offended not only those who disagreed with it but those who shared its sentiments.

The Phelps clan's appearance at the funeral began a very long and notorious career of protesting at as many funerals of visible AIDS victims and LGBT persons as they could find. They also targeted pride events and celebrations. They became the epitome of hatred toward gay people. When, after time, they felt they were not getting enough attention for that hatred from an apathetic American public, they morphed their protests to include fallen American service persons. They could barely rationalize this activity and were nakedly seeking to inflame emotions by targeting people whom the public revered.

Now Fred Phelps is reportedly dying. Many will celebrate, and many will make comments about picketing his funeral in an eye-for-an-eye retaliation. I will not be among them.

I do not respect Fred Phelps, nor do I forgive the pain he inflicted, but I value him. I value what he contributed to the struggle for LGBT equality. I am grateful that because of his presence, millions woke up to understand homophobia better and to confront it.

His activity had a dramatic and unintended consequence. He and his family became the mirror that many Americans had to face to recognize their own attitudes about LGBT people. They did not like what they saw. Others who did not harbor such negativity themselves were made aware that such oppression existed. My blogger friend Ono Kono was one. She wrote:

Two decades ago, I was unaware of the struggle of LGBT people. Back then, I was a busy working Mom, juggling career and family. I cared about others, but I was asleep when it came to their plight. ... I thank you Phelps clan for opening my heart to love, in spite of your hatred for my LGBT brothers and sisters. I saw the cruelty in your eyes, echoed by the pain in others who watched you. I don't know what brought you down your path to hatred. I can only say, I thank you for being so open about it, but only because you helped me wake up to the horrid truth that people who hate still exist.

Fred Phelps and his Westboro Baptist Church believe what many who are homophobic out of "religious" principles espouse. Their anti-gay stance is based on a poorly thought-out, superficial reading of the colloquially translated Bible. "The Bible says that being gay is a sin" is the popular notion.

The Bible does not actually say that. What it actually represents is specific writings from ancient times, addressing situations in those times and places that have nothing to do with modern LGBT people. In order to make it apply to our current life, anti-gay Christians have to take passages out of historical or cultural context and demand only a calculated literal understanding of them. Fred Phelps has been their undoing.

Fred Phelps has been consistent. There is no way to approach Biblical interpretation literally, stay true to it, and not conclude that God not only hates gay people but wishes us dead -- stoned, specifically. The Westboro Baptist Church has simply expressed the extreme but logical extension of the "Christian principles" that other anti-gay people also state and claim to support.

Phelps held up a mirror to the homophobic Christians, showing them what their "principles" looked like. They did not like what they saw. They saw hatred, but did not feel like haters. It forced many to take a more educated look at scripture, and they found that their original uneducated comprehension was lacking. They found that there were many ancient mandates there that did not apply to modern life, and they found that the passages that they had applied to gay people did not really apply, and that the ramifications of those passages did not reflect the bigger core principles of love that they valued.

Fred Phelps became the example that no self-respecting Christian wanted to become. Many actively readdressed their values, and public tolerance of LGBT rights began to surge.

One of my blog posts about my family got on the Phelps' radar about a year ago. It inspired this tweet from Fred's daughter: "Fag marriage is not about ideology or who's 'nice'. It's about obeying God as a Nation!" My sincere response to her was, "Thanks, Margie. Your family has done more to propel gay rights forward than mine ever could. Congrats."

That is my requiem to Fred Phelps. He was a man with a mission. His failure to succeed is our triumph.

He achieved the most epic fail in modern history. Not only did he not inspire a single person to his point of view, but he drove millions away in revulsion. For everything he lost in personal credibility and respect, he helped fortify the well-being of those he sought to destroy.

His contribution is iconic for that very reason. It is a lesson that today's fundamentalist Christians who seek to discriminate under the banner of "religious freedom" need to absorb. My hope is that at the death of Mr. Phelps, they take a sober look at his legacy and seek not to emulate it.

He is their current and present wake-up call.