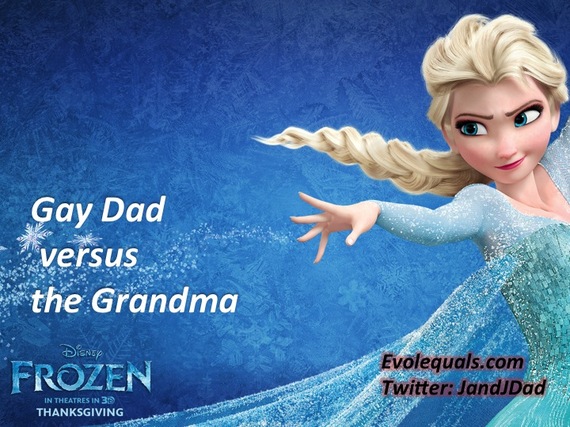 Last week, a self-defined Mormon grandmother named Kathryn Skaggs wrote a blog in an effort to alert the world that the movie Frozen was targeting children with a "gay agenda." In a sense, she was not alone in seeing "something gay." Many gay bloggers reviewed it with the thrill that it captured the air of gay persecution and some went so far as to dub it "the gayest Disney movie ever."

They, of course, did not mean it in the same way Ms. Skaggs did. There seems to be some common ground that there is a relevant LGBT message, even if we can't all agree on exactly what it is, and whether it is "bad."

Ms. Skaggs is a California pro-proposition 8 activist who feels her religious beliefs should trump the right of other families to enjoy the love and commitment she does. Her writing expresses the fear that same-sex marriage is the single most daunting threat to society. Her obsession on this topic consumed her long before a certain animated movie hit the multi-plex.

It is not a mystery, therefore, why this icy blockbuster riled her sensibilities and got her all frosted. She saw that it made some gay people happy, and that translated to mean it was not only bad for her, but that it also threatened life as she knows it.

Logically, her points in her anti-Frozen blog are absurd and as paranoid as she worries they might be. In her follow up blog, she claims that she wants no boycott (Phew... it would be tough for her to call for one given she has taken three car loads of children to see it.), no ill will towards the film, and a rejoice that others got something out of it. It certainly begs the question as to the purpose of her fussing.

For me, I found her reaction disturbing and worthy of discussion. She is a grandmother. I am a dad. She took her kids to see Frozen. I took mine. Let's rumble.

I know you are smarting a bit due to the public thumping you have taken over your "Not Going to Let it Go" piece. On Twitter, you gave it the old "at least it raised awareness" sound bite. News flash: We were already aware.

You weren't totally wrong. Don't misunderstand me, you were mostly wrong. You are also wrong about religious rights, the mob actions of a majority who wants a minority to disappear, and about many of the other real ills of the world. Those are discussions for another day.

The discussion this week has been the movie Frozen. You have raised the alarm, mostly unsuccessfully, to declare that this movie is a propaganda film targeting kids with the hidden goal of indoctrinating them with the "gay agenda." You feel it would "normalize" gay people and allow them (us) to participate in same sex marriages. As a gay dad with two beautiful sons adopted through foster care from drug-addicted parents, I am mystified why it is important to you that my family be marginalized and treated as abnormal. I am not arguing whether the idea to accept people who are different is presented. It certainly is. I don't understand why you have a meanness in rejecting that concept as a good one.

There was something "gay" about Frozen. It was in there. Why else would thousands of gay people get deep gut emotional reaction from the song "Let it Go"? Why else would it be heralded as a terrific "coming out" anthem?

The other things that worried you so much are just not in this movie. Sorry, they aren't. You worry that Elsa is celebrating disobedience. She isn't. Ariel took care of that in Little Mermaid. You worry that opposite sex marriage is mocked by Anna's willingness to marry the first guy that pays attention to her. The movie does not dwell on that point, it works through it. Anna ends up with a guy who treats her as an equal person. For mockable opposite sex pairings due to a single meeting, please see: Cinderella, wed after one dance; Snow White, wed after a coma and a kiss; and Aurora who only needed a deep sleep and a kiss. The only place heterosexual pairings could earn more derision is on shows like The Bachelor.

Mostly, however, you worry that the movie targeted kids, converting them over. I can assure you that your fears are misguided. (My blogger friend Aaron has suspicions they are not, but I think he was just kidding.) If anyone is susceptible for the indoctrination you worry about, I assume that it would be my kids, raised by a Dad and a Papa.

Fret no more. Here is a conversation I had with my son Jesse, not long after seeing the movie Frozen:

Jesse: "Dad, I have decided that life is about the three Ws".

Me: "Wow. Okay. So, what are the answers to those questions for you?"

Jesse: "Well, I am a kid who loves his family. When I grow up, I am going to move to Maui. And... I am going to get married and have a kid someday."

Taking advantage of a natural moment of opportunity, I then heard myself asking a question I had never posed to him before:

Me: "And who do you see yourself marrying? A man or a woman?"

Jesse paused. I was impressed how he did not regard the question as strange. He did not react to it as if there was any preconception as to what his answer should be or was likely to be. He answered without pressure or coercion and with a brief moment of self-reflection.

Me: "Cool, Pal! Sounds like you have things well planned out."

With that, my son had come out to me, as "likely straight."

Frozen, if it was to mesmerize kids into being gay, had not sunk into a young man who according to "theory" would be a prime candidate.

It leads me to the big question, Ms. Skaggs: Of all your grandkids who dragged you to see the Disney movie that you seem to regard with a degree of suspicion, what will happen when one of them comes out to you in the future as gay? There is a chance, statistically, that one of them might be, after all.

What will you do? Will you tell them to cover up and hide, and feel the shame of being different -- as Elsa's parents did? Will you lead them to suicidal feelings, or throw them to the street, as many parents do to their kids in that situation?

Or will you learn the lesson that Anna did, that acceptance and love of your family is the biggest "true love" of all?

Yes, Ms. Skaggs. The movie had a hidden message. It had a message of love, and hope. It had the desire to melt the closed heart and inspire it to let go, and love other people. It wants the target of its message to warm from within and to accept others as they are, and give them the freedom to live their best and fullest lives. What you got wrong is this: That message was not targeted at your grand kids.

It was meant for you.