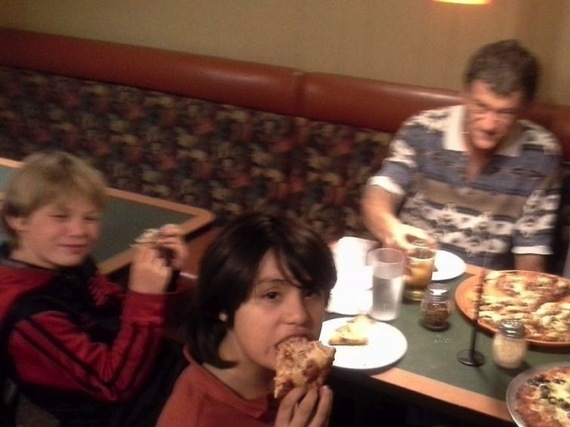 These past few years may end up being known as the years of "Conservatives Behaving Badly." At the end of last year the Republicans in Congress conducted a massive foot stomping, pout-out and shut down the government because they did not get their way on the previous healthcare bill. In the state of Utah, conservatives were shocked when the justice system intervened on the subject of marriage equality. Now, we have a couple of adult size tantrums playing out publicly.

One is scary thug tactics. A group called The Constitutional Sheriffs and Peace Officers Association has called for an "uprising" against same-sex marriage. The other is by a man named Trestin Meacham who refused to eat until he gets his way and marriage equality is again banned in Utah. His original intention was for the state to declare nullification, but he currently seems satisfied by the Supreme Court temporary stay of the marriages. He stated, "You can start a blog and you can complain on social networks until you're blue in the face and nothing will happen, but actions speak louder than words and I'm taking action."

As a gay dad, I am familiar with both these "actions." The first one, by the "Sheriffs" has a clear name, pure and simple: "bullying." They plan to intimidate their prey into submission through a combination of threat, insults and mob action. Just as we turn to school administrations for bullying strategies, we need to call on Utah authorities. They need to react immediately to the promise of subversive action or run the risk of law and order being severely undermined. LGBT citizens have the right to not be subjected to harassment and need protection.

The second "action" is one that has been deployed by each of my two sons in their infancies. They each tried belligerent refusals to eat, accompanied by tears and screams, over something they wanted but were not getting. It is a challenge that I think most parents face when our lovely darlings turn into single minded, willful forces of nature with which we cannot reckon. However, reckon with them we must.

The method that has worked for me has been one of positive discipline. First rule of this approach is that the object of the child's tantrum may not, under any circumstances, be granted. If it is granted, you have set up a permanent pattern of behavior and you are the one who has been "trained" by the situation. Second rule is a firm objective delivery of the situation to the child, but without allowing your own feelings of frustration, anger or sense of futility to be integrated. Scream back, and you lose. The final rule is to not abandon the child even though he is as close to channeling Linda Blair in the Exorcist as you have ever seen. So, through the tears, firm stance and not reacting, you also communicate your love and affection. I know that doesn't sound easy. It's not.

In this gay dad's opinion, Mr. Meacham's actions fell squarely into the second category. I bounced the situation off my son Jesse (age 11) for a quick reaction.

Me: Hey Pal. Here is a guy who is refusing to eat until the government does what he wants them to do.

Me: Yeah. Really. I'm writing him a letter. What should I tell him?

Jesse: Tell him it never works. I know. I tried it. You never get what you want and you lose your video games.


Here is my open letter to Trestin Meacham from a gay dad perspective:

I am probably an example of the last person on earth you would like to be hearing from right now. I am a gay dad with a same-sex partner, who is raising two sons, adopted as young infants from foster care. I fight for the dignity of families like mine, and protection of the children in them, for their legal and ethical rights. I realize that your mission is to "nullify" families like mine out of existence, or at the very least, to disappear from view, stripped of protections or recognition.

The purpose of this letter is not to tell you that we do exist, and we will not go away, but rather, to give you feedback on your recent state of self-starvation. In your blog you state, "This has nothing to do with hatred of a group of people. I have friends and relatives who practice a homosexual lifestyle and I treat them with the same respect and kindness that I would anyone. "

The Massachusetts Supreme Court stated that whom one marries signifies one of the greatest acts of self-definition an individual can make in life. I would love to believe your sentiments as you state them, but your actions say differently. Starving yourself to prevent your fellow citizens from marrying is not respectful. Leaving our children without social or legal standing is not kind. Your reference to specific relatives as "practicing a homosexual lifestyle" is dismissive, superficial and, quite frankly, rude.

The fact is you are not going to get what you want. Equality is an important value, and it is the key ideal for which our country stands. Your religious freedom is another important value, but in order for you to have it, your LGBT neighbors must be equally free to practice their own religious convictions, otherwise it is not freedom at all, it would be the imposition of tyranny. You currently appear to be ordering pizza based on recent twitter posts, but should the next court decision start marriages up again, it is unclear if you will re-instate your fast. I am hoping you don't.

What you are doing in this fasting activity, in a rather bizarre way, in your adult tantrum, is to take a human being hostage and threatened harm. The fact that you are both the hostage taker and hostage in this situation is almost beside the point. You cannot be allowed to succeed due to your behavior, not because your ideas are wrong (as obviously, I think they are), but because your action of harm is wrong in itself, and we as a society, cannot reward it with fruition.

As another thinking, breathing, loving human on the planet, I care about you. I do not want you harmed and would like to see you healthy to argue your, albeit misguided, ideas yet another day. I sincerely think you need to be in protective custody if you start the starvation regimen again. If you take this much further, I can only hope people around you make those kinds of arrangements.

I sincerely wish the best for you, but without you harming yourself or your LGBT neighbors. I hope you reconsider your actions and make healthier choices through out this process.

Ideally, rather than starving yourself, I would rather you not only eat pizza, but go out for a pizza with my family, or a family like mine. Get to know those whom you seek to "nullify." I would like you to see the love, respect and joy that we share. I would like you to see that real family is bigger than the Constitution, bigger than Utah and not worth fasting over to prevent.

It may be time to grow up and broaden your horizons. Better to do that on a full tummy.