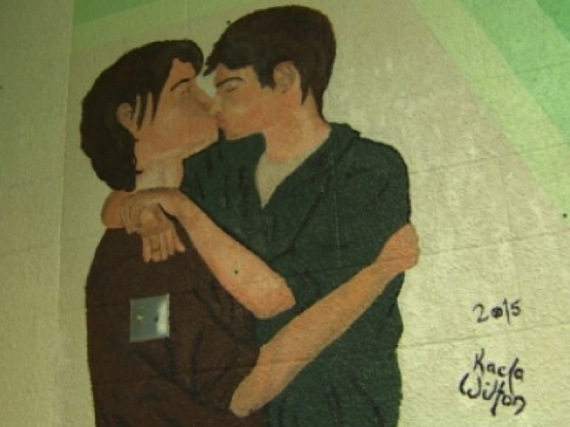 The kiss. For some reason it, and the experience of giving and getting one, is a completely integrated aspect of the high school experience. While puckers may have been planted in earlier years, it is the high school ones that create the milestones to adulthood, the firsts we will remember our entire lives and, in truth, the magic of our adolescence.

One depiction of such a kiss is not folding harmoniously into the tapestry of its school's life, however. Last week it caused controversy. Kaela Wilton is a 16-year-old student at Onoway Jr./Sr. High School in Alberta, Canada. For an art project, approved by her art teacher and the school principal, she depicted two young men in an affectionate kiss. After its unveiling and subsequent complaints, the school covered the mural and would not allow it to be seen.

They are now deliberating on what to do.

I know what to do: I am writing them a letter.

I am a gay dad, the father of two 12-year-old boys. Next year they will be in a school such as yours. I dearly hope that in that school there is a mural on the wall exactly like the one that Kaela Wilton has created for you.

I write that not as one who is wildly enthusiastic for public displays of affection, nor as one who is anxious to encourage potentially sexually inappropriate behavior amongst teens. I have set standards for my sons in both of those areas, and my expectation is that they will adhere to them.

Kaela's mural is a gentle image of young affection and blossoming adulthood. While its depiction might make some feel that it makes such gestures too visible, I would remind them that the audience observing it is participating in school dances, first dates, landmark crushes and unforgettable romantic moments on its own. The image, in terms of sexual content, stays appropriately underneath a PG-13 level.

The value of the image far outweighs any offense to even the most overreacting sensibilities.

When I was 17 I buried my instinctual longing for same-sex affection deep inside myself. It was taboo to be gay, and even though my feelings told me that that was exactly what I was, I consciously suppressed it. I suppressed it to the point that I reached a suicidal crisis point.

I will never forget first witnessing a same-sex kiss. I was on a trip into Los Angeles to look at prospective colleges for the future and was parking on the streets of Hollywood. A man was saying goodbye to his partner and, without giving it a second thought, gave him a quick, affectionate kiss on the mouth.

My reaction? The reaction from a young, closeted gay man? I laughed out loud.

The man shot me a look of disgust, communicating a sense of violation. He was right.

Years later, and on many streets, during different relationships with men I wanted to kiss, I experienced karmic retribution for that laugh. As I wished to innocently reach out and kiss the person I was with, the homophobic world around me rose up and invaded my psyche. I could not give my innocent kiss, because some would react badly around us, and many would react as I did, with laughter, having never seen such a gesture before. Or I could kiss my man anyway and make a statement, a bold move in the face of a disapproving public. As Panti Bliss pointed out in a recent TEDtalk, that option is fine for activism, but my desire to kiss was not to make a political statement but to be romantic, so to make a bold move would ruin my intention. The romance would be gone.

The first kiss I shared with a man was not until I was 21. It was in a disco hidden down a secret alley and populated with only gay men. He was a lovely, young, British man with a perfect smile and a dancing glint in his eye. He put his arms around me and gently kissed my lips, and no one around us made us feel ashamed. It was a beautiful experience that I deserved. It is an experience that your gay students deserve, and they should not have to retreat to a secret and hidden enclave in which to experience it.

Whether they are LGBT or not, your students have been inundated with opposite-sex kisses their entire lives. If not played out in front of them in person, such events are commonplace in all available media, even in commercials, including during children's programming. They have likely not seen even a single display of same-sex romantic expression.

This mural can change that. For your students who have same-sex attractions boiling up within them, such an affirmation can be lifesaving. It gives them and others the opportunity to witness something warm yet rare as normal and accepted. It allows them to embrace the parts of themselves that they have kept secret and removes a dark excuse for self-harm.

Those who are shocked at the display can react to the unfeeling stone wall so that in the future, when they are in front of real, honest-to-goodness humans, they can react with appropriate support, or at least rehearse how to keep their disdain to themselves.

Ms. Wilton has created something of value, in both its intention and its execution. It should not be kept hidden but unleashed to inspire hearts, love and acceptance. What could be more important than that?

My sons are on the brink of discovering who they are and what deep instincts drive them. If they were going to your school and they were finding that their instincts were heterosexual, I am sure they could look around and see plenty of public displays of affection between other guys and their girlfriends and feel, "Oh, yeah, that is me and what I want." If it turns out that one of them is actually gay and he looks around and sees no one like him, I would hope that he could gaze upon a mural in one of your hallways and think, "OK, there I am," and walk on to class with hope in his heart and a dream that a painting on the wall promised him was his to fulfill.