For years, the radical anti-gay movement has made a paranoid case that "the gay agenda" was an actual book published in 1990. That book was called After the Ball: How America Will Conquer Its Fear and Hatred of Gays in the 90s. It outlined a suggested plan for addressing America on LGBT issues. Much of its outlook was basic common sense and PR. It, in retrospect, looked directive since people with common sense actually acted accordingly in the years after it was published. They acted that way not because they read the book, or had even heard of it, but because, they too had common sense.

The idea that all LGBT people would have and follow a single manifesto, and that there was an actual "gay agenda" is of course, ridiculous.

Two books that have just been released could, together, be looked at as creating a sort of "biblical" arc to our movement. The first, a memoir by out former Congressman Barney Frank, plays like an "Old Testament." Frank deliciously charts his adventures from the closet to the center of the political stage. He tells the tale of LGBT people forging their way across the barren deserts of homophobia, and the political strategies needed to deal with good and bad kings of yore, otherwise known as Presidents. 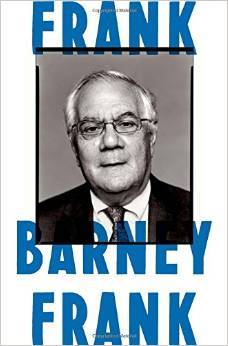 Frank is candid, and self critical on each step. He details compromises and pragmatic realities. His account of life during the Clinton years is particularly fascinating. Frank describes Clinton not as an "enemy who held out false promise, but as a friend who tried to help us but failed." This description held particularly true not only with DOMA, a strategy conservatives used to trap Clinton ("Forcing Clinton to choose between signing or vetoing a bill against same-sex marriage was a delicious prospect."), but also with the "Don't Ask, Don't Tell" debacle.

Frank's harrowing tale of DADT, is one of the hapless hero, who sets off an unfortunate chain of events by means of a well intentioned bungle, but then comes through to help save the day just in the nick of time in the end. It was he who came up with a compromise idea to allow LGBT service-members to serve, but confidentially. He stood by in horror as his idea was then bastardized by the administration with terms that not only did not improve the situation, but made it worse. Years later, he was again in the center as he helped force the hand of a Democratic Senate to pass DADT's repeal literally minutes before a Democratically controlled Congress would be gone for years to come.

Frank's book, and the "Old Testament" rendition of the LGBT movement ends just as the brink of the "messiah-ship" of marriage equality is about to descend and change the tone of activism as we knew it.

Enter Michelangelo Signorile. Almost on cue, Signorile picks up the charge. As the win of marriage equality descends, he is the voice of what is to come. He is the "New Testament" to Frank's "Old." Where Barney Frank was solely about political process, Signorile is the voice for grass roots activism. 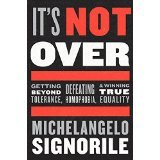 The core of the Signorile message is clear and important, and blazened across the cover of the book: It's NOT Over. Just as the path of the Judeo/Christian movement did not end with the birth of its messiah in the Bible, so has the LGBT path not ended with the societal milestone of marriage equality.

In both cases, it is only the beginning.

Where Frank looked for legal and legislative victories, Signorile takes us further into a path towards winning the American psyche. He points out that positive opinion polls only tell a surface story. He cites psychological studies that show ingrained emotional homophobia has not eroded much at all. Just like racism, there is an intellectualism that has suppressed public displays, but the deeper problem still exists on a more secretive emotionally reactive level.

If conservatives thought some unread, unknown book of the 1990s held a movement changing agenda, their tongues should really wag now -- Signorile's book lays out an actual strategy.

We should listen to it.

He proposes a well researched outline of the forces LGBT will be facing. He describes the "religious freedom" strategy designed to chip away at LGBT gains and to increase marginalization. He points out the detriment of "victory blindness" which has already been voiced by celebrities like Madonna and Patricia Arquette, as well as media in general. He describes the danger of LGBT people ceasing to identity strongly with community and becoming invisible and less effective.

His prescription moving forward includes wider education on LGBT history and sociology, the breaking of glass ceilings, physical readiness against hate crimes and an assertiveness with the media that the "debate is over" -- there is not longer a need to present bigotry as a counter opinion to every story about LGBT justice.

Mostly, he tells us to stay vocal and visible.

(Exposing homophobia) is in fact what many LGBT activists and bloggers have been able to do in taking on bigotry, from as far back as the vibrant AIDS demonstrations of twenty-five years ago and up to the stories that viral today on the Internet...

Every chance we have to direct clicks and eyeballs to stories of LGBT discrimination and ugly incidents of rejection and bigotry is an opportunity to challenge the victory narrative, cut through victory blindness and lay the groundwork for the hard, necessary fights ahead.

(That means you'll be hearing more from me in the future.)

The Christian Bible ends with a cryptic, symbol-heavy vision of "end times." It describes the ultimate judgment day. Neither Frank nor Signorile take us there in their chronicles, but I believe we can write the LGBT "rapture" ourselves, without them.

It is a vision that has been inspired by a modern prophet, Martin Luther King Jr.

I refuse to accept the view that mankind is so tragically bound to the starless midnight of racism [and homophobia] and war that the bright daybreak of peace and brotherhood can never become a reality...

I believe that unarmed truth and unconditional love will have the final word... one day [we will] live in a nation where [we] will not be judged by the color of [our] skin, [our sexualities, our genders] but by the content of [our] characters.