How my dad supported his gay son

There was a time in my life, around 11 years old, when I often skipped school because I was being bullied and harassed. It was obvious to my classmates that I was “different” and they targeted me because of it. At lunch, there was a boys table and a girls table, but I was relegated to the “other” table.

I hated waking up for school. Sometimes I would put my head over the toaster to create a “fever” and ask my mother if I could stay home. Sometimes it worked. Sometimes it didn’t. Those days that it didn’t, I would put on my uniform, grab my lunch and deliberately slam the front door to our apartment. The loud noise signified to my parents that I was on my way to school.

What I really did was tip toe back to my bedroom and hide in the closet. Inside, I would carefully listen for my family to leave for the day. Once they were gone, I would breathe a huge sigh of relief as it meant I could turn on the TV and relax—I was free from my bullies!

One Monday, the school administration called my mother to inquire why I hadn’t been attending. It just so happened my father was home that day and my mother demanded that he check to see if I was there. As he called my name, my heart was pounding and I put my hand over my mouth to hide my breath as I hid in the closet.

Eventually, he found me and I had to surrender. Guilty and embarrassed, I explained to him that the kids in school didn’t like me and made fun of me. I never told him that they called me a “fag,” but somehow he knew. He told me that he wanted to tell me a story.

He told me about a friend he had when he was a teenager. His friend was bullied, like me, and his peers would call him “gay.” My dad said that his friend denied it, but that he told his friend, “It doesn’t matter what you are. We are friends.” It turns out his friend ended up coming out later in life and called my father as an adult and thanked him for what he said. My dad told me that he was just happy that his friend was living his life honestly and was happy.

I knew why my dad told me this story, but I still denied that I was like his friend. Little did I know that reflecting on this experience as an adult in college would give me the courage to come out to him.

He responded, “I love you no matter what. And I’m happy you’re out now and can be yourself. I always knew you were gay. I was just waiting for you to feel comfortable enough to tell me.”

Part of the reason I work for SAGE advocating on behalf of LGBT elders is because I know firsthand the struggles of being an LGBT person. The other part, I tell people (and why SAGE being a member of the Diverse Elders Coalition [DEC] is personally important to me), is because of my dad. He supported me as I grew up and now he is aging. The tide is shifting. It’s my turn to support him. 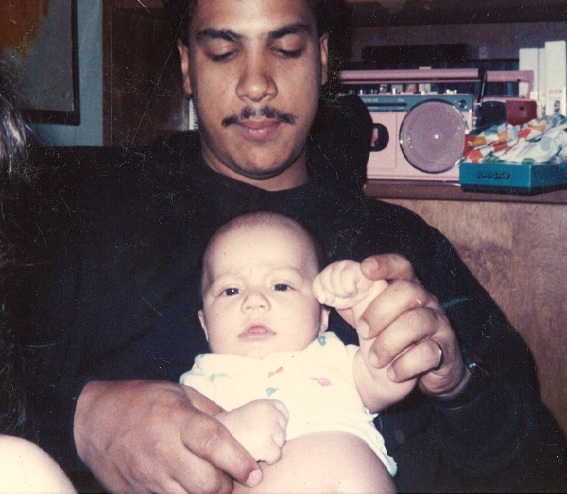 My father today and key policy issues that affect him

Today, my father is a 59-year-old older adult. He is just three years shy of early retirement (as determined by Social Security) and seven years shy of full retirement. My father had a difficult life— his brother died in front of him after getting hit by a bus and only months later his mother lost her battle with cancer. As the oldest brother at age 17, he was forced to grow up fast, get a job to support the family and never graduated high school. He currently works as a carpenter building clubs and sound stages, which is a physically demanding job. He doesn’t earn a large income and receives no benefits through his employer, including no sick days. If he doesn’t work, he doesn’t get paid.

I’ve seen my dad sick, and when he should be home resting to recover from an illness before it becomes more serious, he goes in so he has enough money to pay his bills. Paid sick days are critical to the health of older Latinos, like my father. SAGE’s fellow DEC partner NHCOA (National Hispanic Council on Aging) notes that, “Hispanic older adult men have an above average labor force participation rate and, as older adults are more susceptible to illness, paid sick days are especially important for them.”

Currently, there is a bill being considered in New York City, the Paid Sick Time Act (PSTA). If passed, it would allow private sector New York City workers (like my father) to take a modest amount of paid time off to care for their own health or the health of a loved one. Not only would this benefit my father, but my brother as well who currently does not get paid sick time. Should my father face a medical emergency and my brother need to be by his side, both would lose pay for the days not worked. However, PSTA would allow adult children to take time off of work to care for a parent who has taken ill. Even though New York City’s Mayor Bloomberg says he’d veto the bill, there are enough strong supporters of the Paid Sick Time Act on the City Council to override the veto. I stand with NHCOA in hoping that it passes.

Social Security is a lifeline for older adults

I often worry that my dad does not have a safety net to fall back on should he get injured or simply be physically unable to do the work required of a carpenter because of his age. Due to age discrimination, it’s already difficult for older adults to find work, let alone an older Latino with no formal education.

My father works as hard as ever, but my siblings and I see that he is slowing down. And like many children with a parent who has historically earned low wages, we anticipate that we may one day become financially responsible for our father. A burden we accept without question, but a difficult burden nonetheless. Especially as we all earn modest salaries and live in a city (New York) that has the highest (and rising!) cost of living in the nation.

Policymakers have considered cutting Social Security benefits under the guise of the chained Consumer Price Index (CPI). This policy would reduce the rate at which Social Security’s cost of living adjustment increases. This policy would cost older adults thousands of dollars of benefits they earned over their entire life. If this becomes a reality, financially supporting my father may be reality much sooner than anticipated especially if he is forced into early retirement due to the physically demanding nature of his work. As an employee of SAGE, I know well that Social Security is the single most important financial safety net program for older adults and makes the difference between poverty and a living-wage retirement for a significant portion of older Americans. Almost a third of single retirees receive income only from Social Security, and that number is even higher for older Latinos. My dad does not have a pension, nor a 401k. Social Security benefits will in fact make the difference between poverty and a living-wage retirement for him. The retirement age cannot increase nor can it face further cuts.

This is just a snapshot of the uncertainty my father faces as he ages. Not all fathers support their gay sons, but my dad supported me. I’m honored to do all I can as an aging advocate to support him and ensure that he, and all diverse elders, can live their later years with economic security and in good health.

The piece was originally posted on the Diverse Elders Coalition’s blog.