Manuscripts often contain written accounts and visual representations of history, but sometimes the history of a manuscript -- who commissioned it, how it was used, when and how it came to reside in a collection -- can also be a "page-turner."

In the year 1413, Duke Louis VII of Bavaria borrowed a lavish set of illuminated manuscripts from the French king. With over a million hand-written words and as many as 1600 individual images, these manuscripts contained a text known as the Mirror of History, which purported to tell the entire history of the world from the Creation to the Middle Ages. The four volumes somehow became separated from each other soon after Duke Louis borrowed them and went their own ways. Two were lost to the mists of time, one ended up at the University Library in Leiden, Holland, and a second eventually made its way to the Bibliothèque de l'Arsenal, Paris. Last week, these two manuscripts from Holland and France were transported to Los Angeles for a long-awaited reunion. After 500 years apart, these volumes have been brought together again for the first time since the Middle Ages for the exhibition Imagining the Past in France, 1250-1500 at the J. Paul Getty Museum (Nov. 16, 2010 - Feb. 6, 2011). The French king's manuscripts with their lively and colorful illuminations are just two of the almost 80 medieval treasures featured in this exhibition devoted to exploring the role of history in the medieval period. 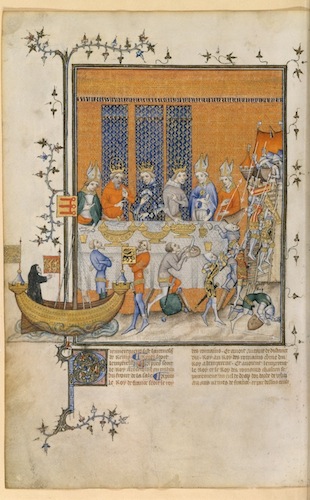 Many of the manuscripts seen in the exhibition have never before traveled outside of their home countries and have only been infrequently displayed in the libraries where they reside. I and my co-curator, Anne D. Hedeman, have spent the past eight years preparing for the exhibition: negotiating the loans with almost thirty libraries and museums, studying the objects and their texts, planning the installation, and writing the catalogue. It is a genuine thrill to see the exhibition that has lived so long in my mind as a concept take real form in the galleries. As each object is removed from its crate or box, it is like Christmas morning and the unwrapping of an ardently desired present. Over the course of the next three months, tens of thousands of visitors will have the once-in-a-lifetime opportunity to see some of the greatest representations of French art to survive from the Middle Ages. 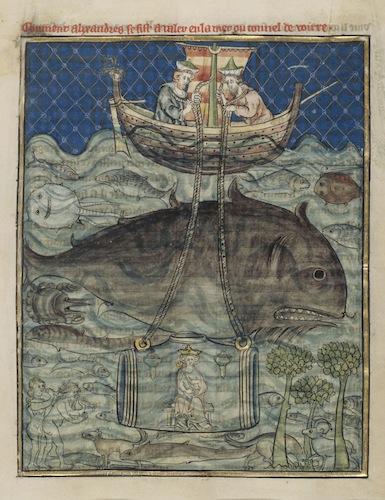 One of the aspects of the exhibition that will most surprise viewers as they enter the galleries is the size and ambition of the manuscripts on display. Some of the manuscripts are over a foot and half tall and weigh up to 50 pounds. One object tells the history of the world in the form of a scroll over 33 feet in length while another was originally intended to have over 3000 individual illustrations in a single volume. Considering that the books are written on animal-skin parchment and embellished with gold, silver, and precious pigments, it is mind-boggling to consider the cost of just the raw materials that were necessary, let alone the time required to add the handwritten text and carefully-crafted illustrations. These manuscripts impressed their original viewers in the Middle Ages just as much as they do today. The medieval equivalents of expensive sports cars, these extravagant objects were intended to have much the same effect, acting as status symbols for the rich and powerful.
The narrative images of history are also particularly alluring. Seeing Alexander the Great descend to the depths of the ocean in his glass diving bell to find sea creatures resembling people, dogs, and sheep, or encountering representations of the medieval idea of India complete with elephants, dragons, and griffons, upends the common association of history books with falling asleep in eighth-grade social studies class. Concentrating on dramatic and action-filled tales filled with heroic battles, moral dilemmas, and chivalric derring-do, the images in history manuscripts help us to understand the broader conception of history in the Middle Ages, which often encompassed material that we would now consider myth, romance, or even outright invention. 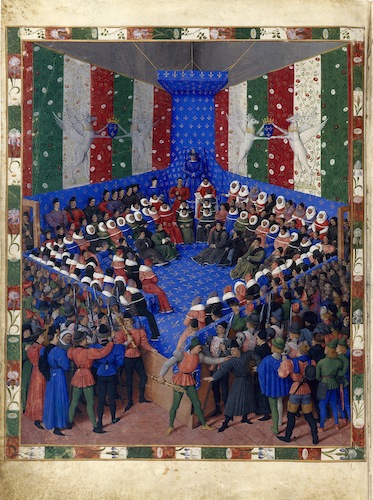 Since exhibitions of manuscripts are expensive to mount and it is often difficult to obtain the loan of objects that usually safely rest in their home libraries, personal encounters with medieval manuscripts are rarer than with many other art forms. I hope that visitors will come away with the feeling that they have been able to share in something special, with a lively appreciation for this rare and exciting art form. I only wish that I could lead each person through myself to share all the excitement and knowledge that I have gained in the past eight years of working on this project. On the other hand, I feel confident that the manuscripts will be well able to speak for themselves.