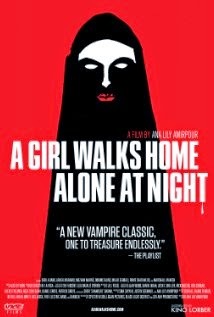 What is Iranian noir? Like The Blair Witch Project it's shot in black and white and maybe recalls 60's B movies like Succubus with a little bit of Rebel Without a Cause, thrown in. Ana Lily Amirpour's A Girl Walks Home Alone at Night stars a vampire in a chador (Sheila Vand) who rides a skateboard. She sucks the blood out of Saeed, a drug dealer and pimp with "sex" tattooed on his Adam's apple. Saeed has a stuffed antelope over his bar and modern art on the walls of his pad. She tells Atti, a prostitute (Mozhan Marno), "You're sad. You don't remember what you want. You don't remember wanting." And she falls for a James Dean look alike, Arash (Arash Marandi) who drives a Thunderbird and pierces her ears with a safety pin at night in the front of the bilging smoke- stacks of the local power plant. As you may be able to tell A Girl Walks Home Alone at Night is totally over the top. Like its heroine, it sucks blood-- this time out of a number of genres rather than people--including that of the morality tale. But it's the settings of the movie, the oil fields, the domiciles of Arash, who lives with his father Hossein (Marshall Manesh), a heroin addict, of the vampire herself, of the prostitute and of a wealthy prima donna, Shaydah (Rome Shandaloo), who is recovering from a nose job, that tell the story. Though this vampire is an avenging angel, you may have to search in vain for political allegory, despite the fact that the movie takes place in, yes, Bad City, Iran. Amirpour, is obviously in love with film style and particularly the haunting postmodern surrealism found in filmmakers like David Lynch and David Fincher. Looking for a message in A Girl Walks Home Alone at Night would be like trying to analyze the politics of Un Chien Andalou and with the film's resident cat perched enigmatically between the vampire and her lover in the film's final scene, A Girl Walks Home Alone at Night might also have been called Un Chat Andalou.