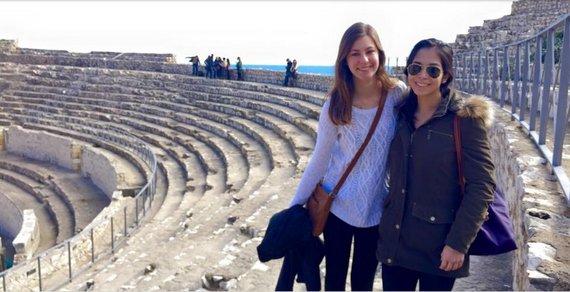 While traveling abroad may be an equally enthralling experience for all, we ladies are faced with some unique challenges we must conquer during our journeys. Everyone receives the standard advice when traveling-- tips to avoid pickpockets, find the best food and score the best deal on souvenirs. Aside from these more common suggestions, women must be equipped to deal with a whole other set of unique struggles.

Makeup Mishaps
Makeup is something I found to be one of the biggest nuisances during my travels. It's a hassle to lug around a bag full of all your lotions, powders, creams and pencils when traveling continuously, or even over a short weekend trip. Not to mention, some of my most expensive and revered powder was smashed or shattered in a single instance of plane turbulence or mishandled luggage. Few things are more devastating than opening your bag to find that your nearly untouched Nars bronzer has crumbled into oblivion. To avoid mishaps like these, make sure you're only packing the essentials for your trips. By bringing only what you can't possible live without, you reduce the hassle and the threat of damage. If your powder does smash, a trick I've learned is mixing a little water in with the pieces, pressing it down to reform in the container and letting it dry.

Time of the Month Troubles
I was warned on multiple occasions prior to leaving for Europe that normal tampons, like Tampax, would be harder to find once abroad. While you don't even want to imagine having to deal with a period while trying to explore and enjoy Europe, if you're traveling for an extended period of time there's a good chance you'll have to. More often than not, I was able to find a completely normal selection of tampons in grocery stores and pharmacies across the continent. However, I have heard of people being unable to find tampons with applicators in some cities. Yikes. To salvage your European adventure while plagued with period, make sure you pack extra lady products in your bag, as well as Advil or Ibuprofen and water.

Deodorant Drama
No matter how "off the grid" you're attempting to get, nobody wants to be the smelly girl of the group. During my time in Europe I did run into an issue with female deodorant specifically-- in some cities it was impossible to find! Do European women sweat less? Regardless, everyone deserves to smell fresh and feel confident. Sometimes, the closest thing to deodorant I could find was a puny fragrance stick that women could roll on. That just wasn't cutting it for me. If you need something stronger, I suggest bringing your own, even a handful of carry-on sized sticks will save you the smelly struggle.

Modesty Matters
While I'm all for self-expression via clothing choices, there are some popular tourist destinations where clothing matters and women are required to cover up. The Vatican and certain mosques in Europe are among the locations in which women are required to cover their shoulders and wear modest clothing in order to be permitted entry. It is also expected that women will cover up in certain countries in the Middle Eastern region of Europe. It's important to balance your fashion choices with your efforts to respect and understand differing cultures.

Safety
The need to take safety precautions when exploring a foreign city is just as prevalent while in Europe as in the U.S. Many European cities are conscious of our concern for safety and offer a variety of programs and resources for women to seek safety and successfully avoid dangerous situations. There are also a few key things you can do to protect yourself. Never walk alone, especially at night. Avoid areas of the city that are ill lit. Use common sense when it comes to alcohol and make sure you're practicing self-control when it comes to drinking in foreign cities. Don't be afraid to utilize door to door escort programs if they're offered. Look out for your friends.

Alcohol
On a continent where beer is often cheaper than water, it's easy to get carried away. While study abroad is an opportunity to explore all that Europe has to offer, both during the day and at night, it's imperative to remember that you are drinking in a foreign city and often with people who aren't familiar with your limits. If you aren't 21 yet, this may be your first experience drinking legally, and you may not have practice with the concept of casual, non-binge drinking. Europeans don't react kindly to Americans who are publicly intoxicated and being loud or causing a scene, and often already have negative preconceptions regarding American drinking habits and overindulging. Remember to drink water, eat food and limit your pre-gaming. Don't be that girl, and watch out for yourself.

Birth Control
Truly a female-specific pain, continuing your birth control prescription abroad can be a hassle. Often brands are different abroad and you can't access your prescription while in a different country. While it may involve fighting with your insurance company for an hour over the phone in your local pharmacy (speaking from personal experience), the best solution is to stock up on pills before you go. While normally health insurance often only covers a monthly dispense of your pack, I found it possible to pick up six months of pill packs to take with me. If you know you'll want to continue your birth control abroad, it's important to plan ahead and visit your pharmacy in advance to make sure you stock up with the necessary dosages before you depart from the U.S.

High Heel Horrors
Everyone wants to look good during a night out. At 5'5", high heels and wedges are a necessary component to my outfits. Unfortunately, while the antiquity and beauty of a historic European city may be charming during the day, it often becomes torturous at night. Only us girls know the struggle of walking long distances across uneven cobblestone streets wearing high heels. I was forewarned before even leaving the U.S. that this would be a challenge I would have to overcome. My best recommendation is to invest in a pair of cute ballet flats that can be rolled up and easily tucked into a purse. Slip these on during your walk to the club, and change into your heels as you're waiting in line. This way you'll avoid the threat of sprained ankles and bruised toes during your trek to the bar, without sacrificing fashion.

Being a female has always had it's pros and cons. Regardless, it's possible to have an incredible experience abroad if you know the tips and tricks of traveling as a girl.