Sarawak, Malaysia, May 15, 2015 -- One less glance up while trekking in the forests of Borneo could mean missing a moment of a lifetime.

I am traveling in Borneo to learn more about the work of WCS (Wildlife Conservation Society) in Sarawak, one of the largest areas of tropical rainforest in Asia. The landscape is changing fast, and we are working to see how the forest and its wildlife inhabitants can survive threats from logging, palm oil and rubber production and poaching.

I got a glimmer of hope earlier this week while visiting the areas next to the Batang Ai National Park, located near the border with Indonesia. 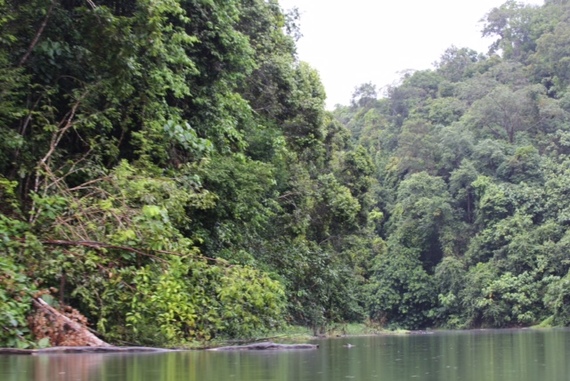 A two-hour ride in a flat-bottom longboat, skimming along the green Delok River, carried us deep into the Ulu Sungai Menyang forest in central Borneo. Photo by Judith Hamilton.

The day started with a trek through Ulu Lallang in the Ulu Sungai Menyang forest in central Borneo in the heartland of the Iban community. Early in the morning, a two-hour ride in a flat-bottom longboat, skimming along the green Delok River carried us deep into the forest.

We sat mostly in silence and wonderment in our boats as a canopy of trees -- including Kapur and Engkabang Jantong -- and intense humidity enveloped us. You could see the sun piercing through the leaves, shining on the rapids in the shallow parts of the river. This great abundance of forest all around you quiets the soul.

My companions and I traveled here wanting to see how some 200 orangutans -- a small but globally significant population -- were doing in this 14,000-hectare habitat. Extirpation here would mean another big loss for the orangutan - the largest great ape of Asia and with which we, as humans, share 96.4 percent of our genes. 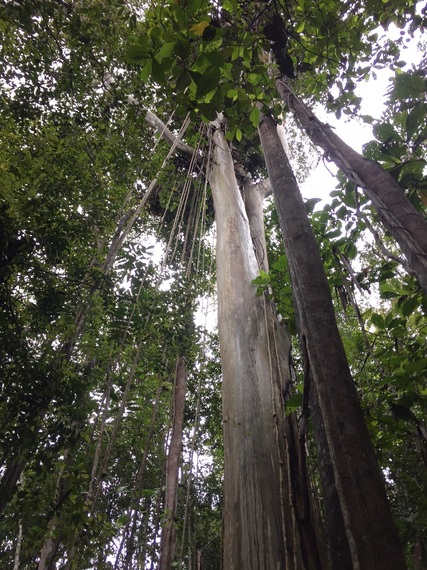 We sat mostly in silence and wonderment in our boats as a canopy of trees and intense humidity enveloped us. Photo by Cristián Samper ©WCS.

The first group of us moved fast through the forest while my group walked slowly, catching sightings of birds that included two endemic to this landscape: the Bornean blue flycatcher and chestunut crested yuhina.

After two hours or so looking for orangutans over difficult terrain, you quickly respect their ability to blend in with the trees of its landscape, and you begin regretting how illegal logging, and the planting of oil palm and rubber plantations, have significantly scaled back the numbers of this great ape that is now only found in Borneo and Sumatra.

As we were about to climb a ridge, one of my companions, Dr. Melvin Gumal who runs our Malaysia program, glanced up to spot a young mother orangutan with its infant holding on to her tightly. She was looking at us carefully as we gazed at her inquisitive face and long, burnt-orange hair covering much of her body. 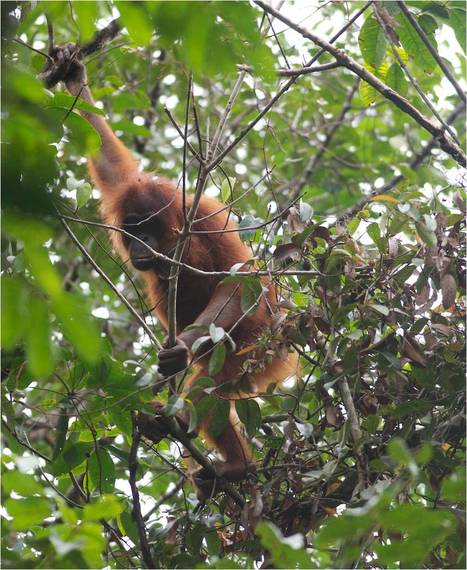 WCS research is yielding information on the distribution of orangutans that has helped to protect 80-85 percent of current Malaysian orangutan habitat. Photo by Daniel Kong ©WCS

She sat still, making a kissing sound. She turned away, reached with her endless long arms to a branch, moved to another tree effortlessly, and in a blink disappeared into the forest. It was two minutes of magic that felt like two hours. She was probably 10 years of age, while her infant less than a year.

I will never forget my first sighting of an orangutan in the wild. The forest all around me became even more important to conserve. This was her home.

I am blessed to have had this opportunity to see this amazing animal -- so much like us humans -- and one that needs our help for survival. And I am very proud to be a part of WCS, which has worked to protect orangutans since the 1960s when Dr. George Schaller started researching this species. 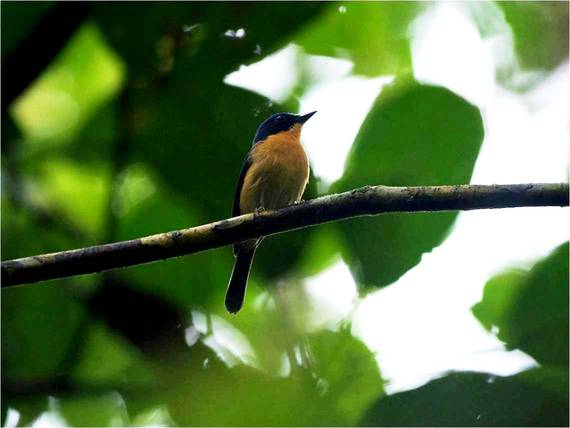 As we walked through the forest, we caught sightings of several birds endemic to this landscape, including the Bornean blue flycatcher (above). Photo by Daniel Kong ©WCS.

His surveys were followed by more than two decades of field work by WCS scientists like Dr. Liz Bennett and Mike Meredith. Our commitment here continues to this day with Dr. Gumal and his colleagues.

Their work is yielding information on the distribution of orangutans that has helped in a collaborative manner to ensure that 80-85 percent of current Malaysian orangutan habitats are protected in the Ulu Sebuyau National Park, Sedilu National Park, Batang Ai National Park and Lanjak-Entimau Wildlife Sanctuaries.

The Sarawak government continues to show a keen interest and intention to protect the orangutan, one of the most iconic stars of its natural heritage. 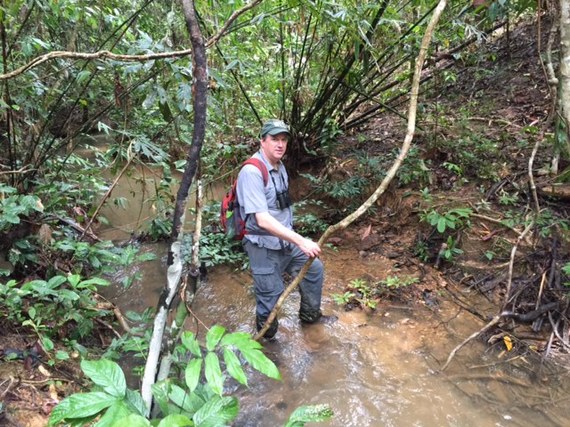 This visit to Borneo provides me with an opportunity to discuss with our Malaysia staff the critical work WCS is doing to address how forests and their wildlife inhabitants can survive threats from logging, palm oil and rubber production, and poaching. Photo by Mary Dixon ©WCS.


I don't want to sugar coat what the reality is for orangutans across their range. More needs to be done, including the government extending the existing BatangAi/Lanjak-Entimau complex (the two protected areas are contiguous), which would mean that almost all of the known orangutan areas in Malaysia would be protected.

But after looking into the clear brown eyes of that orangutan mother, witnessing a breeding population of orangutans and knowing of the efforts of the government to expand protected areas, I feel some hope here in Borneo. And very lucky that Dr. Gumal looked up one more time so I could see my first orangutan in the wild.