When my husband and I first moved to Paris, I spent some time substitute teaching while I figured out what I was going to do with the new life I found myself in.

I'll never forget how I dreaded being on lunchtime supervision because I saw that fish was on the menu that day. I had been a teacher for long enough to know that there were going to be a lot of elementary school kids plugging their noses and telling me they didn't like fish. This was going to be a long supervision period.

Those kids proved me so wrong that I was left in disbelief. They were actually asking for seconds, and I was the only one scrunching up my nose. 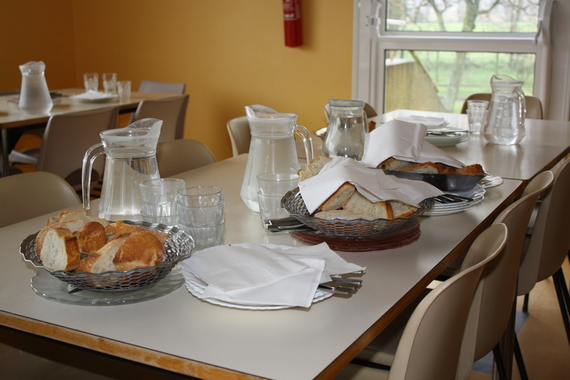 That was my first encounter with French kids eating whatever is put in front of them.

Fast forward to a few years later, and I was living in the south of France with two kids of my own. My mom had flown in to help out when my second daughter was born because being a mom to two kids under 2 was something that would take a little getting used to.

"She won't eat any vegetables," I complained to my mom as I tried with all my might to get my nearly-2-year-old to eat her dinner. My daughter is French by birth, but not by blood; maybe that's why the "French kids eat everything" gene hadn't quite kicked in yet.

My mom told me I needed to be firm and not give her any other options. She was going to show me how it was done -- she hadn't yet realized how determined her granddaughter could be. After seeing my mom, a professional grandmother by now, struggle to get her most headstrong grandchild to eat her vegetables, I gave her a little incentive.

I was so sure my daughter wouldn't eat her veggies that I half-jokingly offered my mom €300 if she could get my daughter to eat green beans by the end of her month-long visit. My mom's smile and the glimmer in her eye let me know she was up for the challenge.

I wish I could tell you that she left France with a beautiful new pair of leather boots that I paid for, but, sadly, there were no beans eaten on that visit.

A year later, when my daughter started school, I wondered how she would ever survive. Unlike at schools in North America, French kids are not allowed to bring a lunch from home. All kids eat whatever they are served in the canteen.

My child would starve, I was sure of it.

Each week I would head over to the bulletin board posted outside the school and check what they were eating for lunch. There wasn't a burger and fries or a chicken finger to be seen on the list. The menu always resembled that of some very nice French restaurants that my husband and I would frequent for date nights.

I would find myself trying to decode what the kids were having for lunch throughout the week: epinard momay, roti de dinde sauce louisianne, poelee brocolis-champignons, julienne de chou fleur. It all sounded so fancy. Was Julia Child working in the kitchen? How were they serving this to 3-year-olds? Did they have a magic wand to get these kids to eat this very grown-up list of food?

Whenever I would come across the ladies who worked in the lunchroom, I would stare in disbelief as they would tell me what a good eater my daughter was. Were they sure they had the right kid? Because mine would barely touch a vegetable at home. Yet, she wasn't coming home hungry, so she must have been eating something.

When the opportunity arose for me to visit the lunchroom, I jumped on it. Partially because I was intrigued, but mostly because I wanted to see my daughter eating veal and a side of broccoli with my own eyes.

I spent one week in the canteen of my daughter's school during lunchtime, but I had already been reading the weekly menu for months. Each week there was an array of salads, seasonal vegetables, meats, fish cooked in different sauces and of course, desserts. The menu changed weekly, but the constant was that the meals were always fresh, well balanced, and, in my mind, quite "grown up" for 3-year-olds. 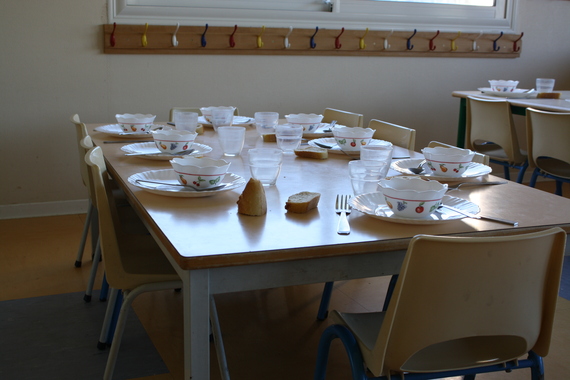 So what did I learn during my time in the school lunchroom?

Each day the table is set for them, just like you would set a table if you were having guests for dinner. There's no plastic cutlery or non-breakable plates. These 3-year-olds use grown-up plates and cutlery, just like their teachers. The kids are served their meal at the table, not buffet-style. This is France, after all, where the gastronomic meal is protected as a UNESCO intangible world heritage item. There's no messing around when it comes to the French and eating.

All the kids ate what was served; there is no food brought from home. Each day at lunch there was a three-course meal -- no exceptions. The kids came into the lunchroom and sat politely using their manners, just like little adults. They were always offered seconds when they were done with a course, and not forced to eat something they didn't like, but always encouraged to try it. Not liking something didn't happen often, though. Since they don't have a morning snack, their appetites were usually quite good by lunch, which was evident from how they cleared their plates. However, if someone didn't like something, there wasn't a fuss made -- their plate was cleared, and the next course was served.

Parents pay €2.60 for their child's three-course lunch. I was starting to think maybe I could swing by for lunch sometime, because I couldn't get anything nearly that good for €2.60 anywhere else!

Loosely and unglamorously translated by me: Grapefruit, roast beef, puree of potato and carrots, pro-biotic yogurt

French kids only go to school for half the day on Wednesdays, so there is no school lunch.

Loosely and unglamorously translated by me: Soup, zucchini with tomatoes and olives, cheese omelet, banana 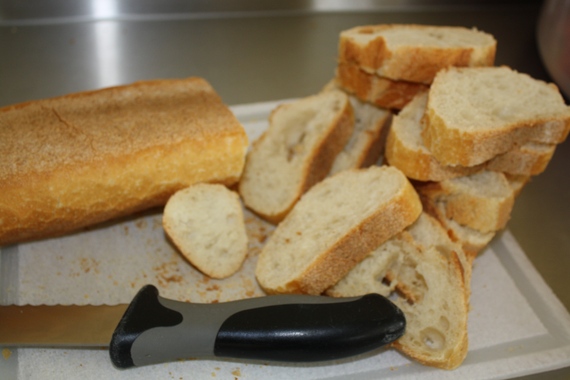 So there you have it. My eyes have been opened, and I am amazed by what the French public school system does daily at noon. It's no wonder French kids can be seen in very nice restaurants on their best behavior, eating whatever is given to them. It's expected of them at a very early age, so it's just normal for them.

Now, if only that French magic would cross over to our dinner table at home.