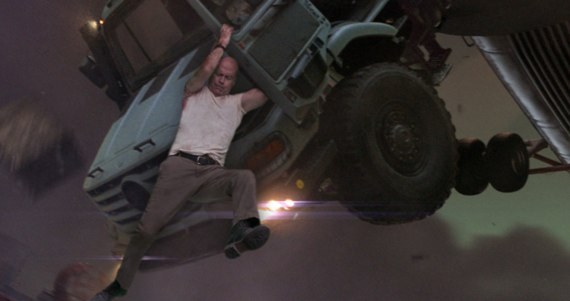 Let me qualify the word "enjoy" that I used in that last paragraph. I've known my friend Steve about as long as I've been aware of the character John McClane, played by Bruce Willis in all five Die Hard movies. If Steve, the next time I happened to run into him, were to suddenly declare that he has superpowers and can't be killed -- and then, right in front of me, proved the point by jumping from an incredible height and surviving, or by exposing himself to dangerous levels of radiation with no ill effects -- I would "enjoy" watching that in a freakish kind of way.

At the same time, I'd be horrified by what I had just seen and I would have at least 30 questions about how something like this could happen. How does someone who was a flesh-and-blood human being in 1988 become invincible in 2013? Maybe Steve would point out that he's been slowly but surely letting his powers be known to me since 1990. Maybe I just hadn't noticed because it wasn't made so blatantly obvious the last couple of times I saw him, in 1995 and 2007. Incidents I had ascribed to "good luck" -- the way he survived after being shot out of an aqueduct, for instance -- were actually clues. At this point, Steve just doesn't have the patience or expertise to hide his specialness any longer. Or, more likely, he's just too lazy to care.

Now, taking this scenario back to John McClane (fun fact: I've been writing about John McClane this entire time), it's slightly jarring to compare McClane's relationship to mortality in A Good Day To Die Hard with that of 2007's Live Free or Die Hard. But it's obvious that this new installment no longer belongs to the same series as the original Die Hard -- and there is one scene in each film that, seen side-by-side, illustrates this point.

In retrospect, nothing that crazy happens to John McClane in the first Die Hard. Sure, it's unlikely that he'd survive the events that occurred at Nakatomi Plaza, but there is enough plausibility to get an audience member thinking, Oh my god, what would I do in this situation? The answer is "die," but the fact that you're at least asking yourself that question is the important part.

The most unbelievable scene in the original Die Hard is the one where John McClane avoids an explosion by jumping off of the roof of Nakatomi Plaza, swinging down on a fire hose to a window below him. That's it. McClane even has to shoot the window open because it didn't break when he slammed into it. This is reasonably realistic: skyscraper windows are not supposed to shatter when objects make contact with them. On the spectrum of "crazy shit that happens to action movie characters," this is pretty far down the list.

And even though it's implausible that, in real life, McClane would survive, we in the audience get the sense that McClane knows this, too. We see the anguish on his face, because he knows that the chances of this working are low. For such a low-stakes (in action-movie terms, at least) endeavor, it's extremely riveting. We can still ask ourselves, What would I do in this situation? The answer, again, is "die." But we like John McClane because he didn't die, even though he was terrified of dying.

Now, in A Good Day to Die Hard, there's a scene about 45 minutes into the movie in which McClane (along with his son, played by Jai Courtney, whom I did enjoy in this role) finds himself, once again, in a high-rise building. A helicopter is firing bullets into the room that the McClanes are in, so McClane and his son run at top speed toward the windows, break through, and jump into infinity. The two then crash though scaffolding at a high rate of speed (scaffolding that it's hard to believe they were aware existed), eventually falling into a chute of some kind and then landing safely on the ground without harm. McClane didn't think twice about this decision; there was no anguish at the thought of dying. He didn't even bother looking for a fire hose to swing from.

The man who jumped out of that window had no fear of dying because he knew that there was no way that he could possibly be killed. Watching this was no different than watching a Super Dave Osborne sketch: I'm sure he's going to complain, but he'll be fine. And this is only one of many instances that McClane defies death in ways that make jumping off a building with a fire hose, or running across broken glass while barefoot, look easy. (Let me repeat that for effect: the original movie made running across glass ... suspenseful!)

A Good Day to Die Hard would make more sense if it were about David Dunn, Willis' character from Unbreakable. (I'm not saying the movie would be good, but it would certainly make more sense.) Now, 13 years later, we now know what would have happened if Dunn's son had pulled that trigger: Dunn would be impervious not only to bullets but also heights, glass, radiation, and car crashes. I could almost accept this movie if it were about David Dunn. But I can't accept that this is about the same guy who was frightened to run over broken glass -- the way any other human being would be frightened. Unfortunately, with A Good Day to Die Hard, John McClane is no longer human. And the Die Hard movies are no longer good -- unless you enjoy spectacles of nonsense.