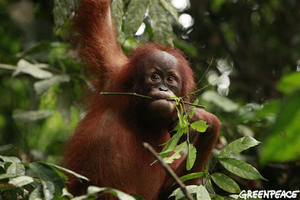 Orang-utans are victims of forest destruction in the Indonesian rainforests as their habitat is cleared by industries like palm, pulp and paper. Image: Will Rose / Greenpeace
The international climate negotiations have begun in Cancun, Mexico, and many people are downplaying the chances for significant movement on a binding deal to save the climate. While some are emphasising the inflexibility of various governments and predicting rough seas ahead for the UN process, to me it's important that we highlight what can be done in Cancun to create positive momentum.

One area in which we expect action in Cancun is agreement on a mechanism to help end forest destruction. Tropical forest destruction is responsible for about a fifth of global greenhouse gas emissions - more than emissions from all the world's cars, planes, and trains put together.

The program being negotiated to end deforestation is known as REDD (Reduced Emissions from Degradation and Deforestation). A good REDD deal would benefit biodiversity, people, and the climate. A bad deal would allow corporations to use claims of forest protection to hide their refusal to cut their emissions to safe levels.

Here's an example of what hangs in the balance at these talks: Norway and Indonesia have proposed a plan that has the potential to be a benchmark for future deals to reduce greenhouse gas emissions by protecting Indonesia's natural forests and carbon-rich peatlands.

This would be REDD in action, and if the rules are right, it could be a huge success. Some of the basic elements of the agreement are encouraging, such as its focus on providing additional emissions reductions, which means that emissions savings will not offset pollution in another part of the world in the form of carbon offsets; a moratorium on new concessions to convert forests into agriculture lands; transparent processes; and the delivery of national-level reductions and independent monitoring systems.

However, the new moratorium will not cover the millions of hectares of forests already slated for destruction. What's more, as shown in the recent Greenpeace report, "REDD Alert: Protection Money", deals such as this face serious risks as industries involved in forest destruction position themselves for REDD funds. In Indonesia, there is a push to reclassify the definition of forests in order to divert money earmarked for forest protection into destructive, business-as-usual practices. 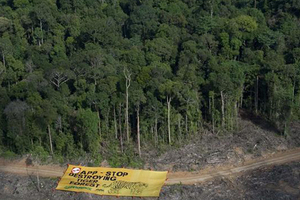 August 2010: This area being destroyed in south Bukit Tigapuluh, Indonesia is one of the last refuges for the critically endangered Sumatran Tiger and is being cleared by an affiliate of the Sinar Mas group's paper arm, Asia Pulp & Paper (APP). Image: Ardiles Rante / Greenpeace
That means that forest destroyers such as the Sinar Mas Group's APP (Asia Pulp and Paper), which has long been on our radar for its nefarious business practices, could have a green light to keep destroying forests , instead of a REDD light that signifies no more business at the expense of the planet.

This is what Greenpeace believes governments must do to set up a framework for the protection of tropical forests:

1. Establish a forest window under the Climate Fund.
As I've said, countries must agree on a mechanism to reduce emissions from deforestation in developing countries. Funding for REDD must be directed towards a new global fund and not offset markets that will allow polluters to keep polluting while buying carbon offsets. Since there is not enough money now pledged to developing countries to deal with adaptation to climate change, making REDD a part of the Climate Fund is more important than ever.

2. Adopt principles to safeguard biodiversity and the integrity of natural forests as the framework for action.
This must include protection and respect for indigenous peoples' rights, and be in compliance with existing international laws and obligations, such as the UN Declaration for the Rights of Indigenous Peoples. Forests are more than carbon stores, they are home to a wide variety of life. A Cancun deal must include requirements to monitor, report and verify the impacts of forest protection schemes on biodiversity, indigenous peoples and local communities.

3. Set national-level reductions in deforestation.
Sub-national projects, which carve up forests into different sections to be protected, merely shift deforestation from one part of the country to another (or across an international border). If you're a logger and a sub-national project is protected, you can just go to another part of the forest to log. A REDD deal in Cancun should lay out a strategy that focuses on ending deforestation nation-wide in the countries where the worst forest destruction is currently happening, and prevent it from increasing in countries with large forests at risk.

I was recently in Indonesia and witnessed firsthand the scars on the land caused by massive forest clearing. If we don't stop deforestation here, we won't solve climate change. That's why negotiators in Cancun must green light a strong REDD deal right now.