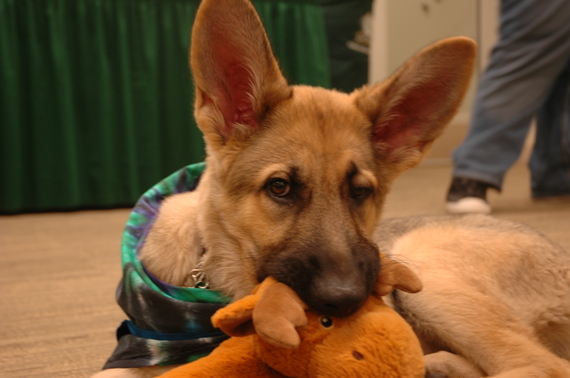 Galen plays with a toy at the "Little Shop of Physics" open house. Follow Galen on Facebook!

This is the ongoing account of living with disability and raising and training a service dog. In time, this account will cover not only my own experiences, but those of others I've met who also have found independence and safety, and a good measure of joy through their service dog partners.

This beautiful pup has been with me since January 19, and in that time has grown from a 20-lb. pup missing his mommy and siblings to a 40 lbs constant companion, learning fast, growing, and carefully coming into his own. Then, 2 weeks ago, I broke my foot. Something stupid that doesn't even leave me a good story to tell. I stepped on a curb wrong while taking some students on a field trip, and the bone broke in 2 places, and won't likely heal properly without surgery.

I had some decisions to make. Galen has never been far from me, and never long out of my sight since his adoption. Part of his training as a service dog means that he goes everywhere with me. For the most part, he's been very good about it, too. He does have the occasional monster mode, and recently has been testing me a bit, showing some independence, but even in his desire for some independence, he's never let me be too far away. The two of us are bonded. 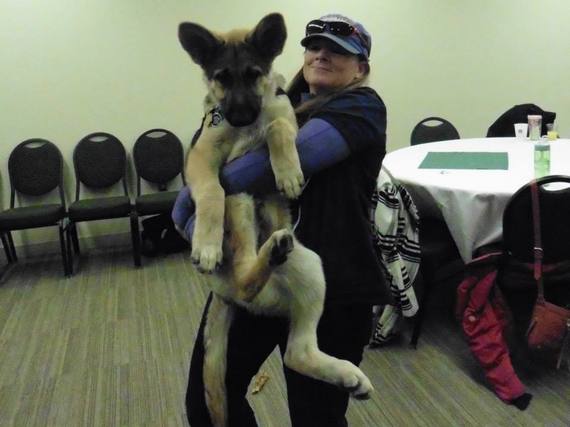 15-weeks-old Galen and his person, Belinda, at the "Little Shop of Physics" open house

It is only in his absence that I realize how much he's already begun to help me, even before his training has come far. I've been sleeping better, with fewer nightmares. Where I tend to isolate myself, with him I end up meeting new people, and going places when I'd have otherwise have stayed home. I'm certain that my lunchtime walks in the park with him have done me good, and I LOVE watching Galen's exploits on the jungle gym there, where he loves to go down the spiral slide.

He has been to the dentist, and to the ER with me. He has been to doctor appointments, and to the supermarket. For the most part, he's behaved well (he was rather upset at the first of two dental appointments we went to... I expect the whine of the drill bothered him, and he was picking up on my own anxiety as well). He even went to the Little Shop of Physics Open House at Colorado State University, where I occasionally volunteer, and where there were thousands of visitors that day. He has occasional "monster mode," but that's part of being a puppy, and not really so different from the way children can behave. I only realized, when we were visiting a friend with two toddlers that the biggest difference between Galen and a toddler is that he listens a little better. He has the same curiosity and fascination of the world, and the same short attention span. He also has the same dependency upon his "mommy." And yet, I've become dependent on him as well. Simply his presence and attending to his needs, taking focus away from myself, has already begun to help some of my PTSD issues. 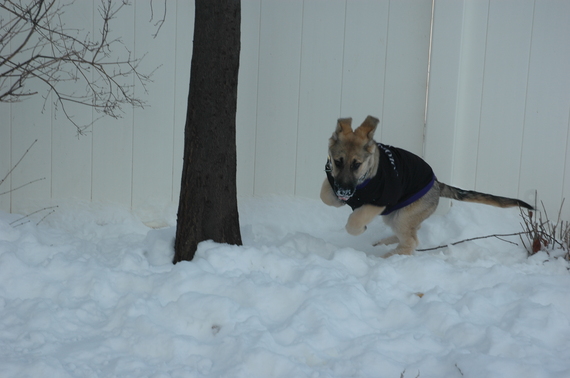 Galen plays in the snow at home, wearing the Colorado Rockies t-shirt a friend gave him. He will go on a field trip to a Rockies game in April (but the shirt may be too small then!), when they host Science and Weather Day at Coors Field

And now he's gone, just as I face one of my biggest PTSD triggers.

I gave Galen up willingly. When I was told I would have surgery on my foot, I realized that I would need help with Galen. I can't rely on Steve, who works 12 hour shifts, making deliveries. That work isn't conducive to having a puppy this young around. I was likewise doubtful that a coworker could provide for his needs, as they aren't aware of the educational needs of a service dog trainee. I went to the one person I felt could help... our trainer with Guild Assistance Dog Partners (GAP Service Dogs).

Mike didn't hesitate to agree to take Galen for a little while, to provide for his needs while I recover from the surgery and get back on my feet. I expect other members from our service dog training class will help as well. If anything, Galen's education will be broadened by this. He'll learn to be a bit more autonomous from me. Being with other dogs will help him work on bite inhibition (I only just discovered the other day why I was having so much trouble with this training... a student was playing with him without asking, and having fun with his hands around Galen's face. That's a big trigger for pups to try and grab with their mouths). It will also give Mike a chance to see what Galen's all about. He's never worked with a Shiloh Shepherd before, so that will be new, but it will also be an opportunity to assess Galen's talents, and where we need to focus more effort.

I received some texts yesterday evening as to how Galen was settling in. He cried for half an hour, then slept for an hour. After that, he was exploring, and playing with an older pup named Seer, yet never letting Mike get too far away. Seer showed Galen a puppy maze, and Galen quickly figured it out.

I think perhaps I'll miss Galen more than he misses me. He won't forget me, though, and I know our reunion in a week or two will be overjoyed. Even as I'm anxious about his absence, I'm reassured to know he's in capable hands, and that his education will continue. I want nothing less than the best for my no-longer-so-little guy. He's not just my furbaby... he's my future service dog partner who will help me as I traverse the recovery process from PTSD, and aid me in dealing with my spine injuries.

We will be a better team than ever when we are reunited, Galen... I promise you that!