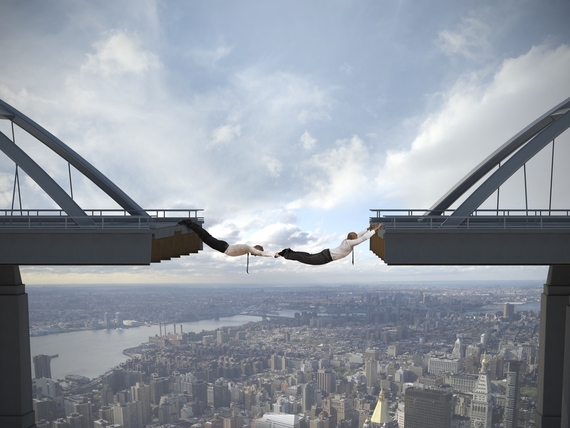 Looking at some of the major policy positions of the current GOP presidential candidates, this race might often be more aptly termed a Demolition Derby.

I don't mean the fact that the participants keep bashing away at each other and naturally, the President. What I'm actually referring to is that the Republican Party remains stuck in a teardown mindset, rather than a building and rebuilding mentality.

So much energy and attention is focused on deletion and destruction: repealing Obamacare, canceling the Iran treaty, defunding Planned Parenthood, deporting immigrants. While it makes for fiery rhetoric, there is a monumental difference between knocking things down and standing for something.

The Republican Party's greatest challenge is not just winning the election in 2016, but defining and developing a vision for the future. And like it or not, part of that foresight has to be both parties working together on substantial, far-reaching goals that will inspire us and test our abilities and resolve.

Being pragmatic, the likelihood of Democrats and Republicans in Washington setting aside their differences to enact major legislation over the next two years is highly unlikely. Yet one idea for breaking through this stalemate is to find an issue that presents a momentous opportunity to bring our nation together. History has shown that Americans will unite over important ideas and initiatives.

One issue fits perfectly within this framework of national accord and purpose: rebuilding America's infrastructure. Schools, hospitals, roads, ports, trains, bridges, airports, public works, our country's list of needed improvements and upgrades goes on and on. And due to the political gridlock in Washington, little progress is being made on this critical issue, the latest example an impasse over the Highway Funding Bill that provides the funds for bridge and road projects across the country.

While a six-year plan has been passed by the Senate, it remains stalled in the House, with the latest three-month extension set to expire on October 29th. States complain that they are unable to plan and construct major projects because Congress keeps passing bills that fund transportation for only a few months at a time. But this stalemate over Highway Funding is an example of a specific issue that could be transformed into an across-the-board opportunity.

In an article in the Washington Post, "Rebuilding America, One Bridge at a Time," Felix Rohatyn and Peter Goldmark Jr., argue that the country must invest in public infrastructure not only because so much of it is aging and falling apart, but that without a strong national investment plan and program, we are falling behind other nations that are investing in modern, efficient, low-carbon infrastructure and thus, reducing our prospects for strong economic progress. They address a fundamental question: what is the logical big driver for the next round of growth?

They argue that investment in public infrastructure provides the foundation for our economy: water, transportation and energy. This includes traditional infrastructure like highways and public transportation, as well as newer projects like more efficient electrical grids and an information superhighway that reaches every home, school and business.

National infrastructure legislation would create thousands more jobs than the myth of the so-called Keystone Jobs Bill. When you look back at the depths of the recession, unemployment in the construction industry was one of the highest at 14 percent. Now, interest rates are practically zero, so the government can borrow money essentially for free. And improving infrastructure means we're building things that last and spending money and creating jobs around the country. We're spreading and sharing the wealth.

President Obama has proposed a six-year, $478 billion infrastructure plan, where roughly half of the new spending would be paid for by a one-time 14 percent tax on nearly $2 trillion of foreign earnings that corporations like General Electric, Microsoft, Pfizer and Apple are currently stashing overseas, escaping immediate taxation. In addition, companies would have to pay a new permanent 19 percent tax on foreign earnings, which would be lower than the 35 percent they are supposed to pay, but avoid by hiding their earning in other countries.

Most Republicans now oppose a new mandatory corporate tax on foreign earnings, preferring a one-time "repatriation holiday" in which companies would be allowed to return their overseas revenues to the United States by paying a reduced tax rate, between 15 and 20 percent. And unlike Obama's proposal, the GOP wants a company's decision to be voluntary, not mandatory, which is a little like asking the fox to please put some eggs back in the henhouse.

A compromise would be to allow this corporate tax holiday, but require a company that takes advantage of it to deposit a set amount, such as $100 million dollars, in a National Infrastructure Bank, a concept that would be a new and improved version of one proposed in 2007 by Senators Chris Dodd (D., CT) and Chuck Hagel (R., NE). If we look at energy efficiency, transportation improvements, water and sanitation upgrades, these are all things that moderate Republicans would likely agree to. And to deal with the conservatives who don't believe in spending, you spread it out over the 50 states, so by voting against it, they're voting against money that would benefit their own constituency. To be fair, you would have to allocate funds based on population, but every state has infrastructure that's in need of repair. But conservatives need to be open to the idea that there's a difference between spending and investing.

The fact is the country may be a house divided, but the house still needs work. And as we head toward the 2016 election, the GOP can take the lead on an issue that could unite, rather than divide us, as Democrats and Republicans fundamentally agree on supporting public infrastructure. Rather than project a brand that stands for tearing down the opposition, the Republican Party can help design a blueprint that will benefit each and every citizen.

This is a perfect issue for progress, one that shows Americans that we can be architects of positive change. It's time for the GOP to start building that bridge.