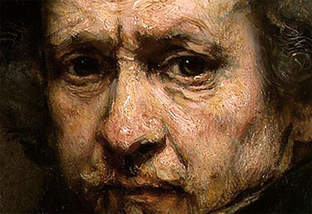 In his fine The Greater Journey: Americans In Paris, David McCullough writes about Harriet Beecher Stowe's sojourn in that city, after the publishing of her novel Uncle Tom's Cabin. Developing her interest in art, and having the Louvre at her disposal, she spent a great deal of time there, especially to view the work of Rembrandt. His paintings reminded her of the writing of Nathaniel Hawthorn:

"He chooses simple and everyday objects, and so arranges light and shadow as to give them somber richness and a mysterious gloom. The House of Seven Gables is a succession of Rembrandt pictures done in words instead of oils. Now this pleases us because our life really is a haunted one. The simplest thing in it is a mystery, the invisible world always lies round us like a shadow...."

Reading this, a tool of immediate importance in writing fiction was recalled to me, for which I'm grateful to Ms. Stowe. The details of the salt shaker or the telephone or the shoe left on the closet floor can say a great deal about a character's plight or happiness, depending on how those objects are described. A sewing needle can explain the deepest chagrin. The stub of a pencil discovered at the back of a drawer can unearth the sorrow of childhood.

Every emotional response to all occurrences can be expressed in the way an object is perceived or thought about by a character. It doesn't matter what the object is. Big or small, thunderous or silent, hard, soft, colorful or plain... it doesn't matter. But for the writer, the language with which the object is described does matter, because it can shape the reader's entire reaction to what is going on in the character's heart.

"The shaker lay there on its side. The lightly spilled salt was detritus, mayhem. But the little peasant boy--porcelain blue as he danced against an absent background all white--seemed to bathe the table in joy."

"He threw the sock beneath the bed. It was there, waiting for him to retrieve it. He left it in solitude, an abandoned wish."