When I was a child, eons ago, we believed in Santa. We hung stockings on Christmas Eve and they were full on Christmas morning. I have a visceral memory from when I was eight, early in World War II, of the anticipation, anxiety and excitement of it all keeping me wide-eyed and listening late into the night. Muffled noises in the living room. Was that Santa? I must have slept, but I can still feel my eyes popping open when it was still dark Christmas morning. Had he actually come? Before daylight, my sisters and I were bouncing near the bedroom door waiting to be called in to the tree to see what he had left.

But I don't remember being taken to sit on his knee or even thinking much about what he looked like. We all had a general idea. White beard, yes. Red suit and hat trimmed with fur, yes. Huge, black belt around an enormous middle, yes. Overflowing bag on his back, yes. Winking, jolly fat man, yes. "Ho Ho Ho," yes. (A pretty limited vocabulary.) Knew who was naughty or nice, yes. He comes in the night, down the chimney (but if he was as fat as everyone said he was, how did he do that?), filled the stockings, ate his cookies and milk, and reindeer and all went on to the next house. But what did he do about houses like ours that didn't have a fireplace? Clearly he came in somehow.

I had an even more urgent question. I am part of a family of rolling stones, an American missionary kid who started life in North China and evacuated with my mother and younger sister in 1940, when World War II was imminent. So it was important to know: Did Santa know that year that I was in Missouri, not Mississippi or not still in China? I married another rolling stone (same China missionary background, who joined the U.S. Foreign Service) and we raised little rollers in Southeast Asia and West Africa.

From this, we are truly aware that there are as many ways of keeping Christmas and incorporating Santa into that as there are families who keep it. You don't have to live elsewhere to see this. Just look around at the wondrous range of faces, names, languages and customs all over the United States. And not just in big cities.

But back to Santa. We don't actually even know his real name. He, whoever he is, wherever he originated before he moved to the North Pole, operates under a bunch of aliases: Old Saint Nick? Father Christmas? Pere Noel? Kris Kringle? Santa?

Whatever his name, how and whenever he comes to children, we certainly don't actually see him. No one did when I was a child in Missouri or even earlier in China. Or when our children were in Malaya or Indonesia or the Philippines or Nigeria. No one does. We just see evidence that he has been there. And we relish and perpetuate the magic for our own children and grandchildren.

However, if Santa is going to be lots of places and talk to lots of children, he needs helpers to embody him because he is far too busy making his lists and checking them twice right up until delivery time. One of our sons, well-endowed with bodily presence, a twinkle and his own white hair and beard, has been the official 'Santa Claus' for the Ann Arbor Symphony every Christmas season for several years. In that mid-Western polyglot but very American university town, even though he is white, one of the gifts he gives children who sit on his knee is an ability to meet them in their own idiom, making Santa theirs, everyone's, at a fundamental level. So, because he has that ability, he greets kids in their own languages beyond English: French, Spanish, Italian, Thai, Vietnamese, Chinese. Of course Santa has to know all the languages children speak.

But more than language is important, particularly as our communities have become more complex, with a rich variety of customs and ways of celebrating Christmas. On December 6, American children with German or Dutch heritages still often put out their shoes for Saint Nicholas, who leaves small gifts. So Santa needs to ask what they got in their shoes if he talks with them after that. Spanish speaking kids anticipate El Dia de los Reyes, Three Kings, on January 6.

As our Santa recounts, several years ago a small Chinese-Hawaiian-American boy, maybe six, climbed on his lap, worried that he didn't have a chimney. "So how does he come to me?" "In the rice cooker" Santa responded. The answer satisfied that year. But he came back the next year older and with a serious question: "Why a rice cooker?" "Oh," says our nimble St. Nick, "a chimney is for heating and cooking. So is a rice cooker." The little boy and his mother, who beamed at the answer, understood this cultural parallel and its magic. For that boy, Santa was his. Since then, his family has 'adopted' our son as their family Santa, annually taking a family picture with him, bringing their own cultural additions, like Santa being protected by ninjas, to the project. Inclusivity is much more suitable to the season and the belief than a highly codified, one size fits only some. 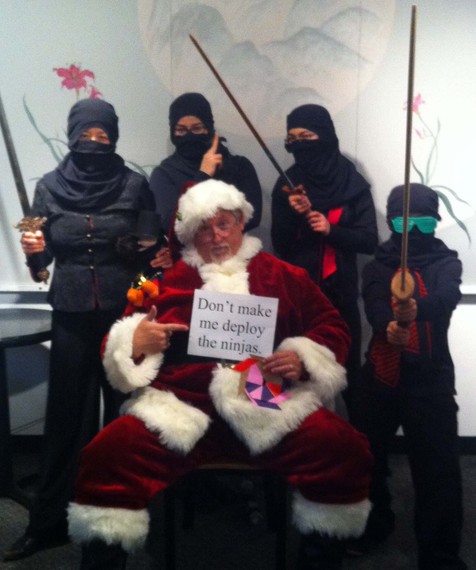 The truth of actually sighting Santa is a different matter, however. Take our oldest son's--'Santa's older brother--experience. The Christmas he was four, we were living in recently independent but very British-colonial Kuala Lumpur, then still Malaya. An American friend and I heard that Robinson's, the one British-owned department store, had a Santa Claus for children to visit. Perfect, we thought, our boys are the right age to go see Santa for the first time, let's go do it. We took the boys--both dancing with excitement--to see him.

We entered the store that was decked out for Christmas with colored balls, red paper garlands and fake snowflakes--a 'what-place-are-we-experience' in the tropics, in what was otherwise a Malay and Chinese city with a smattering of Indians. Following the This Way to Father Christmas (British territory here) sign, we herded the boys up the escalator to the second floor (a rare treat in itself).

And there he was: a tall, skinny, ashy chocolate Tamil in a moth-eaten costume and scraggly fake beard. My friend and I gulped--Santa Claus? But the boys were delighted. Here was Santa, as we Americans called him, not unlike other people they lived among and saw on the street. They each sat on his knee and told him what they wanted.

So, like children in many places, he went home satisfied his wishes had been heard. He and his younger sister hung their stockings on Christmas Eve. They left milk and cookies for Santa and, not entirely happily, went to bed so he could come. Christmas morning the stockings were full and there were presents under the tree--a makeshift one of bamboo branches decorated with lightweight ornaments, but lovely with the spirit of Christmas. Santa had heard.

Perhaps three months later, he and I were going out for a late afternoon walk around the neighborhood. Nearby, there was a house under construction. As such places often had, there was a night watchman. That evening that particular watchman, a Sikh, his long white hair and beard undone, wearing only a white sarong, was bathing himself at the standpipe on the property.

This Christmas Eve, some half-century later, most of our children and all our grandchildren will gather. There are no little children any more, the youngest graduates from college in May, but we still keep the traditions when we gather. The same stockings that have been carried around the world or made especially as grand children come along will be laid out on the table (no chimney in this high rise, and no rice cooker because it died, so I guess he will slide down the stove vent). By our family custom (a gift of custom from a daughter-in-law), each of us will sneak in at some time and be Santa's helpers, filling the stockings that we will open at breakfast Christmas morning. For us, Santa has many faces and comes in many guises. And, Megyn, if you need yours to be a white, 'Twas-the-night-before-Christmas Santa, fine. That's what you need. He's that way for you. Others of us see him other ways. They all work. So:

"Merry Christmas to all and to all, a Good Night."