Spicy. Peppery. A bit toothsome. On the bitter side. I'm not talking about arugula, that rags-to-riches Italian peasant food responsible for serious controversy during the 2008 Presidential elections. But that's all over now and the good news is that another, so-called snooty salad green, dandelion, is at its prime -- and free for the picking -- in between the concrete slabs of even the most urban neighborhoods today.

Like mine, Crown Heights, Brooklyn. Though I love toting a bag of these greens back from the park, there's a small patch of overgrown weeds behind a grocery store where dandelion has been particularly fetching this spring -- and I doubt there isn't someplace like this close to your home. It's called "common dandelion" for a reason: it's all over the place, the stuff that you were taught to pluck from the precious lawn. But as I learned from foraging with Wildman Steve Brill, the more you try to weed it, the faster it'll grow back. 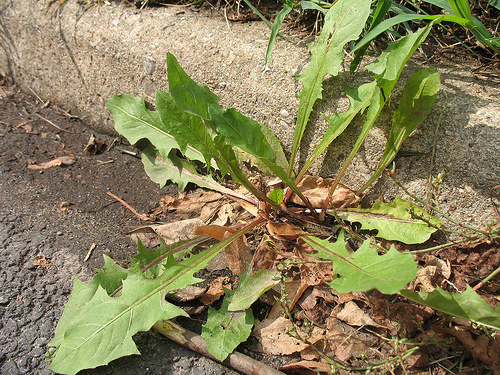 The dandelion is a perennial plant, meaning it'll grow without re-seeding, and this one grows twice annually, early spring and again in the fall. It's an invasive plant too, easily beating out neighboring plants (like grass) for its share of the earth, and it's remarkably well-adapted to "disturbed" habitats (like the trash-strewn patch behind my grocery store). If you've ever tried to destruct a dandelion plant while doing said lawn chores, you may have noticed that its roots are incredibly thin and plentiful, like a jumble of cornsilk. It'll take a large chunk of earth to get them all. The clever plant has even suckered the hopes and dreams of children into its master regeneration plan, by transforming into a puff of blowable seeds after flowering. Moral of the story, you don't need to learn gardening skills to harvest it, and by doing so, you'll likely encourage the growth of more. That's my kind of urban agriculture.

With "bitter greens," one should immediately think "detoxins" in terms of their nutritional benefits. And dandelions are no exception. What good fortune when living in an exhaust fume smog-clogged city! The nutritional wallop of dandelion greens goes farther than that, though, with very few calories in exchange for an alphabet of Vitamins, including A, K, C, D and B-vitamins. It has more beta-carotene than carrots, more calcium and iron than spinach, and is a very good source of potassium, riboflavin and more. Its richness of fiber may help reduce cholesterol -- and as a kid, we thought rubbing the yellow pollen from the flowers on our chins meant we liked butter. 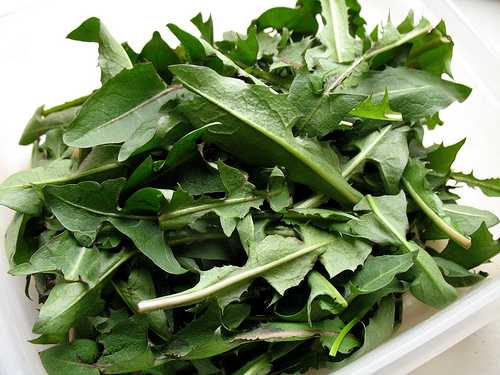 Young leaves are choicest, delicate and milder-tasting, and are great eating fresh in salads, or sauteed. Older dandelion greens are more assertively bitter and grow a bit of surface hair; I'll blanche them to soften the leaves and get them in gear for the next application. A little sweetness can go a long way -- some honey, or caramelized onions. I detect a built-in garlicky flavor with the older leaves especially, and don't usually opt for this go-to vegetable seasoning.

If you're shy of collecting these greens from public places and the neighbor's yard, the best place to get them are at farmers' markets. In fact, I haven't seen too many bunches sold elsewhere. They'll get to you sooner, likely just-picked, so that they'll stay fresher in your fridge. Wild foraging and agriculture may be two completely separate beasts, but they're no strangers, either. You won't be doing the farmers any favors if you opt to pick your own greens, but you will be building a better association with these wild and less-familiar plants, which small farms often specialize in. And who can forage all the time? Well, perhaps if we all picked more dandelions and other edible perennials, so that future springs will feature a flourish in what little green space the city has.