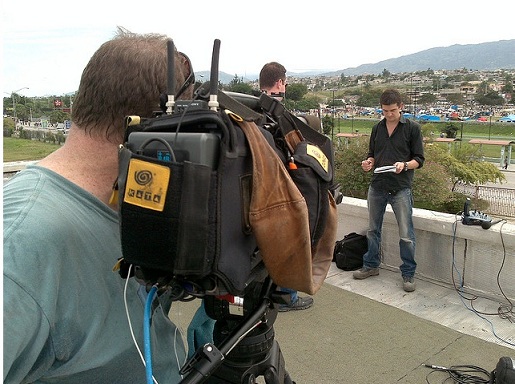 Actor Sean Penn, who is helping manage a camp of displaced earthquake victims in Haiti, is making pointed criticisms of journalists for dropping the ball on coverage of Haiti. He's wrong. I've been on the ground in Port-au-Prince working as an independent journalist for the past ten months. I'm an earthquake survivor who's seen the big-time reporters come and go. They're doing such a stellar job and I want to help out, so I've written this handy guide for when they come back on the one-year anniversary of the January quake!

For starters, always use the phrase 'the poorest country in the Western hemisphere.' Your audience must be reminded again of Haiti's exceptional poverty. It's doubtful that other articles have mentioned this fact.

You are struck by the 'resilience' of the Haitian people. They will survive no matter how poor they are. They are stoic, they rarely complain, and so they are admirable. The best poor person is one who suffers quietly. A two-sentence quote about their misery fitting neatly into your story is all that's needed.

On your last visit you became enchanted with Haiti. You are in love with its colorful culture and feel compelled to return. You care so much about these hard-working people. You are here to help them. You are their voice. They cannot speak for themselves.

Don't listen if the Haitians speak loudly or become unruly. You might be in danger, get out of there. Protests are not to be taken seriously. The participants were probably all paid to be there. All Haitian politicians are corrupt or incompetent. Find a foreign authority on Haiti to talk in stern terms about how they must shape up or cede power to incorruptible outsiders.

The US Embassy and United Nations always issue warnings that demonstrations are security threats. It is all social unrest. If protesters are beaten, gassed, or shot at by UN peacekeepers, they probably deserved it for getting out of control. Do not investigate their constant claims of being abused.

It was so violent right after the January 2010 earthquake. 'Looters' fought over goods 'stolen' from collapsed stores. Escaped prisoners were causing mayhem. It wasn't necessary to be clear about how many people were actually hurt or died in fighting. The point is that it was scary.

Now many of those looters are 'squatters' in 'squalid' camps. Their tent cities are 'teeming' with people, like anthills. You saw your colleagues use these words over and over in their reports, so you should too. You do not have time to check a thesaurus before deadline.

Point out that Port-au-Prince is overcrowded. Do not mention large empty plots of green land around the city. Of course, it is not possible to explain that occupying US Marines forcibly initiated Haiti's shift from distributed, rural growth to centralized governance in the capital city. It will not fit within your word count. Besides, it is ancient history.

If you must mention Haiti's history, refer vaguely to Haiti's long line of power-hungry, corrupt rulers. The 'iron-fisted' Duvaliers, for example. Don't mention 35 years of US support for that dictatorship. The slave revolt on which Haiti was founded was 'bloody' and 'brutal.' These words do not apply to modern American offensives in Afghanistan and Iraq.

Today, Cite Soleil is the most dangerous slum in the world. There is no need to back up this claim with evidence. It is 'sprawling.' Again, there's no time for the thesaurus. Talk about ruthless gangs, bullet holes, pigs and trash. Filth everywhere. Desperate people are eating cookies made of dirt and mud! That always grabs the reader's attention.

Stick close to your hired security or embed yourself with UN troops. You can't walk out on your own to profile generous, regular folk living in tight-knit neighborhoods. They are helpless victims, grabbing whatever aid they can. You haven't seen them calmly dividing food amongst themselves, even though it's common practice.

Better to report on groups that periodically enter from outside to deliver food to starving kids (take photos!). Don't talk to the youth of Cite Soleil about how proud they are of where they come from. Probably gang members. Almost everyone here supports ex-President Jean-Bertrand Aristide. But their views aren't relevant. There is no need to bring politics into your story.

You can't forget to do another story about restaveks. Child slaves. It's so shocking. There is little new information about restaveks, so just recycle old statistics. Present it as a uniquely Haitian phenomenon. Enslaved Haitian farmworkers in southern Florida, for example, aren't nearly as interesting.

When you come back here in six months, there will still be a lot of desperate poor people who have received little to no help. There are many big, inefficient foreign NGOs in Haiti. Clearly something is wrong. Breathless outrage is the appropriate tone.

But do not try to get to the bottom of the issue. Be sure to mention that aid workers are doing the best they can. Their positive intentions matter more than the results. Don't name names of individuals or groups who are performing poorly. Reports about food stocks sitting idly in individual warehouses are good. Investigations into why NGOs are failing to effect progress in Haiti are boring and too difficult. Do not explore Haitian-led alternatives to foreign development schemes. There are none. Basically, don't do any reporting that could change the system.

Finally, when you visit Haiti again: Stay in the same expensive hotels. Don't live close to the people. Produce lots of stories and make money. Pull up in your rented SUV to a camp of people who lost their homes, still living under the wind and rain. Step out into the mud with your waterproof boots. Fresh notepad in hand. That ragged-looking woman is yelling at you that she needs help, not another foreigner taking her photo. Her 3-year-old boy is standing there, clinging to her leg. Her arms are raised, mouth agape, and you can't understand her because you don't speak Haitian Creole.

Remove the lens cap and snap away. And when you've captured enough of Haiti's drama, fly away back home.