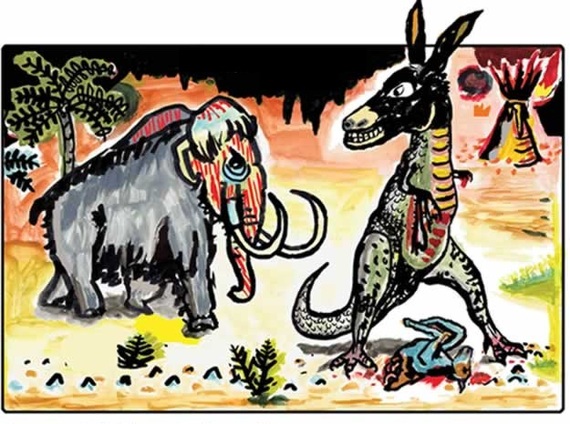 ("The Extinction Election" by Doug Minkler)

This has been a rough campaign season for progressives. First Bernie Sanders lost the Democratic nomination, and then he turned around and endorsed Clinton and discouraged his supporters from casting a "protest vote". That left "Bernie or Bust" types in an awkward position. Should we vote for Clinton? Should we vote for a third party candidate? Should we write in Bernie? Or should we boycott the election?

Cynical commentators say that we should overlook the fact that Clinton is a shrewd Washington insider and that she's the best we can hope for. After Bernie Sanders, many of us can no longer accept such cynicism. Sanders' support of Clinton was disappointing, but it has not diminished the optimism that his campaign inspired in many.

Many of us are genuinely excited about the fact that a woman is running on one of the two major party tickets for the first time ever. We really want to see a woman in the White House.

And yet, we voted for Barack Obama in part because we wanted to see a Black man in the White House, and that didn't turn out so well. We have been disappointed by him in so many ways, including his failure to close Guantanamo, his expansion of the surveillance state, his expansion of the drone program, his kid-gloving of the big banks responsible for the financial meltdown, his half-measure health care program which largely benefits insurance companies, his lack of environmental leadership in Copenhagen and Paris, and on and on. Obama turned out to be just another neoliberal politician trying to maintain the status quo. And Clinton promises to be a less charismatic version of Obama.

On social policy, Clinton is appealing, especially on "women's issues." But economically, we suspect she's in the pocket of Wall Street. She will probably support "free trade" deals, like the Transatlantic Trade and Investment Partnership, which would really bad for the environment.

Ecofeminists like Carolyn Merchant and Rosemary Radford Ruether have argued that the oppression of women and the abuse of the environment are related phenomena, both arising from patriarchal power structures of hierarchy and domination. But that doesn't mean that a vote for a woman is necessarily a vote for the environment.

Though Clinton mocked Trump for being a climate change denier, and though she does have a green energy plan, she is not an advocate for the earth. She supports fracking and natural gas. She won't support a carbon tax. She likely will support the Dakota Access Pipeline. Then there's that email where she said environmental activists need to "get a life". In short, she will continue the same policies which have brought us literally to the brink of a prolonged extinction level event. We are looking at the end of human civilization as we know it, if not the extinction of the human race.

The Most Important Issue Nobody is Talking About

How is that even possible? How is it that immigration and sex scandals and the national debt are seen as more important than the survival of the human species and all other life on the earth?!

"climate change isn't an 'issue' to add to the list of things to worry about, next to health care and taxes. It is a civilizational wake-up call. A powerful message--spoken in the language of fires, floods, droughts, and extinctions--telling us that we need an entirely new economic model and a new way of sharing this planet. Telling us that we need to evolve."

The Perspective of Privilege

The best argument in favor of the "Clinton compromise" is perhaps that it is privileged to vote for a third-party candidate. It's difficult to argue with that. For my part, I'm white, male, heterosexual, cis-gendered, and middle-class, so a Trump presidency would be less disastrous for me personally than for women and people of color. As a consequence, it's undoubtedly easier for me to overlook the evils of a Trump presidency. And yet, I'm not convinced that my privileged position is a handicap in this election.

Just take a look at the last presidential debate. Both candidates (and the moderator) took the desirability of economic growth as a given. Yet it is precisely this single-minded pursuit of growth which has led to planetary ecological collapse. Our industrial capitalist economic system is fundamentally incompatible with a healthy planetary ecosystem. We live on a planet with finite resources, but our economic system is premised on unlimited growth. It doesn't take an economist or a biologist to tell us that one of these things has to give. Since we can't change the laws of nature, our only option is to change our economic system -- and Clinton is not the candidate who will do that.

The Logic of the Lesser Evil

We keep hearing that a vote for anyone other than Clinton is a vote for Trump. Even Bill McKibben, founder of 350.org, has succumbed to the logic of the "lesser evil".

Trump is probably one of the worst people to have ever won a major party nomination. But perhaps even more disturbing than the things he says is how his supporters have responded to what he says. So many people now find it acceptable to be openly misogynistic, racist, and xenophobic. The misogynist, racist, and xenophobic side of the American psyche was always there -- but Trump seems to have given people license to wave it proudly like a flag.

But in spite of the deplorability of Trump and some of his supporters, there is something deeply disturbing about the idea of voting for the "lesser of two evils", especially now when the lesser evil still probably means death to a large part of the biosphere -- and especially when there is a third choice.

The Lesser Good and the Equality of Extinction

Some of us will be voting for Jill Stein, not because she has any statistical chance of winning, but because we want to send a message to the Democratic Party: You can't shove neoliberal candidates down our throats any more and keep our loyalty.

Bernie Sanders permanently changed the political lanscape, and we're revolting against the plutocracy. Neither the abstract hope of a woman in the White House, nor despair over Bernie Sanders' loss of faith, nor fear of the threat of a Trump presidency are enough to make us vote for someone we don't believe in.

Protecting women's rights, LGBT rights, and the rights of people of color are all important to us and we will continue to fight for them (as will Jill Stein). But no issue matters more than saving the earthly biosphere that is our home. What civil rights activist, James Farmer, has said in this regard is as true as ever:

"if we do not save the environment and save the Earth, then whatever we do in civil rights or in a war against poverty will be of no meaning, because then we will have the equality of extinction and the brotherhood of the grave."