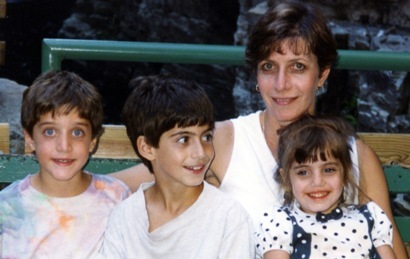 Sharon Diamond, MD, reveals her journey from a childhood dream to become a doctor to her fears that she couldn't master the science courses when she entered college. She became a social worker on an in-patient psychiatric ward where she began to believe again in herself seeing female psychiatrists who had become doctors. She shifted back to her childhood dream and became a gyn/ob and then a mother.

Faced with the conflict of leaving home each day to go to her office or the hospital, she tells more of her story:

"I remember one day when Jeremy was an infant that I rushed home in between a delivery on the labor floor in the morning and my afternoon office hours, so that I could nurse and cuddle with him, only to find that my nanny had taken him out for a walk and wasn't home. I burst into tears!"

Faced with the exhaustion of baby deliveries of others and baby care of her own children born three in a row, she continued to heartily and courageously carry out both pursuits. She finally shifted to gynecology, sadly giving up her obstetrics, so she wouldn't be on call throughout the night.

When her children became older she discovered that despite all her worries, they thrived seeing her accomplish so much. At a recent discussion about attempted sexual assaults on college campuses, her older children, adults now, acknowledged that a lack of respect for women was an important variable. Jasper, her youngest remarked,

"Look Mommy, we grew up in a home where you were a successful and independent woman and Dad and all of us were proud of you. Of course we're going to respect women. A lot of kids don't have that."

In the long run, Sharon reflects on motherhood:

"Motherhood has been the most meaningful experience of my life. From giving birth, and holding a wonderful, beautiful new creation in my arms to sitting on the floor playing with puzzles and toys, to reading and cuddling at bedtime, all the way to attending college graduations and sitting at the dinner table arguing politics and social issues, it has been an incredible privilege to participate in the care and development of my children.What it feels like to nurture their bodies and minds as little ones, and then to watch them grow into mature, kind, and generous adults is almost indescribable. It has given meaning, beauty, depth to my life."

After all her pleasures and trials, Sharon offers advice to new mothers who want to embark on careers:

"I would remind them that in life one is always making choices and decisions. When I hear people ask, 'Can women have it all?' I consider it specious. No one can or even really wants it 'all' - every dessert on the menu. We all make choices every day about what suits us and what works best for us. With work, help, and luck I do believe that most professional women can achieve what they want, both personally and professionally and I would advise every young woman to go for it.

I would also stress that every woman has to define success in her own way. Don't allow others to do it for you. We all have plans that go awry, the key is to have the emotional and intellectual plasticity to roll with the punches and try to adapt to what comes your way. Think of these as challenges rather than roadblocks and continue on. I have three wonderful children who are all making their way in the world with intelligence, humor, and grace. What more could a woman ask for?"

Please comment to Sharon about her accomplishments and emotional perseverance against many odds from emotional exhaustion that could seem overwhelming to becoming a successful mother and doctor.

If you would like to participate in this series, take stock of how you are more of a success than you think and contact Laurie.