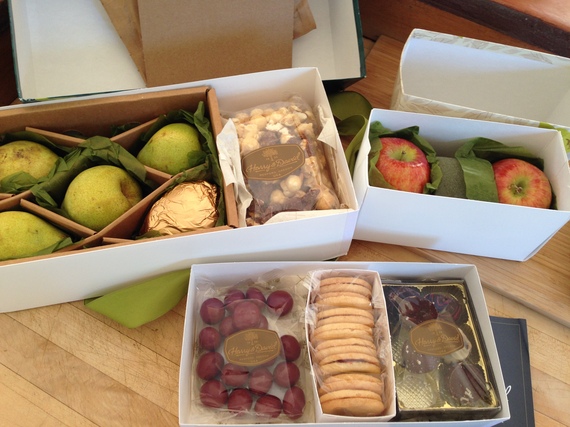 It's been a Harry and David Christmas at our house this year. We have pears coming out of our ears.

A week ago, Rob's bookkeeper gave us a beautiful box of 12 pears from the iconic holiday fruit packager. Then, two days later, one of my sweet clients gifted me a box of Harry and David pears! Rob and I laughed, and I started giving them to neighbors.

A couple of days later, Rob got a package from his insurance agent--a box of Harry and David pears, apples, caramel corn with chocolate pieces, delectable chocolate truffles, and sugar cookies! At least it offered some yummy chocolates.

Yesterday, another business associate of Rob's gave him another box of pears--from Harry and David! Our pear cup runneth over. I've started giving them to friends as well as neighbors. A friend suggested peeling, cutting them up, and freezing them for future smoothies. Did that, too. Rob re-gifted the latest box of pears to one of his employees.

My sister and brother-in-law live in Medford, Oregon, so I'm familiar with Harry and David. The company, which was started by a guy named Samuel Rosenberg in 1910, has pear orchards that date to 1885. Rosenberg's sons, Harry and David, took over management of the company in 1914, and it grew into one of the country's greatest success stories.

Today, it's a small miracle they are still in business. In 2004, Harry and David was acquired by two investment firms--Wasserstein & Co. of New York and Highlands Capital Management of Boston--which then saddled it with unbearable debt, forcing layoffs. In 2011, Harry and David filed for Chapter 11 bankruptcy, but managed to emerge from it just six months later. The company was sold again in 2014 to 1-800 Flowers, and from all appearances seems to have recovered.

Harry and David has been a huge employer for the Southern Oregon region, so all of this abundance of fruit is a good sign. Not just for Medford and environs, but for the national economy. If a victim of takeover greed can come back from the brink, there's hope--truly a Christmas miracle.