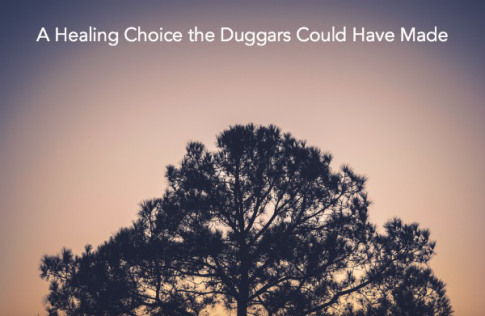 Many families have secrets.

The Duggars, of "19 Kids and Counting" fame, are among them.

Whether or not you follow them zealously, ignore them, or actively disagree with their way of life, the revelation that the eldest son, Josh, allegedly sexually abused three of his younger sisters and two other girls may be having an effect on you.

He was 14 at the time. He wasn't charged with a crime. Nor did he receive any psychological treatment. Rather, he was sent away. Worked at a home improvement company with a family friend, who acted as some kind of mentor. His father, after several months, took him to an Arkansas state trooper, a friend of the family, who did not act. Who was later arrested on child pornography charges. By the time the Springdale, Arkansas police had heard about it in 2006, due to a faxed report from Oprah's Harpo Studios to the Department of Human Services, it was too late to investigate or possibly charge.

The son, Josh, has said his parents provided counseling for his victims, but the kind of counseling is not mentioned. Anywhere. He asked their forgiveness and stated he received it.

If any licensed counselor in the state had been involved, he or she would have had to report. It would have been mandatory.

The girls' childhoods ended in many ways. They may still have nightmares. Flashbacks. Anxiety. Depression. Struggle with worth. Or may not.

They have not spoken.

Josh Duggar's statements have been contradictory. "I understood that if I continued this wrong road that I would be ruining my life." That disturbing statement, in its focus solely on his own life, seems to be the response of someone who may still not realize the impact he had on his victims. Yet he confessed to his potential wife two years prior to their marriage, which does seem to indicate that he was taking responsibility.

"He should have been criminally charged," is what I am hearing.

It is a felony, carrying with it potential years of prison time. And it should. I have seen the damage firsthand of what sexual abuse may do to a woman or a man. It can be horrendous. Plunging someone into a life full of self-doubt and shame. Sometimes there are such terrible sexual problems that affect the victim's intimate life, ability to become pregnant. Sometimes, there are other mental health complications.

It would be hard for parents to do what is legally, morally and psychologically "right." It would be easier to try to do what you could or what you believed necessary to make it stop.

I helped a mom I highly respected years ago. She was told by her then-older teenage daughter that her son had, many years prior, sexually abused her. The mom immediately confronted him. He initially denied, then admitted it. The entire family worked with counselors to come up with a plan that took several years to accomplish. That plan? For the daughter to find healing through therapy and have an opportunity to confront when ready. For the son to get counseling, share what he was learning and how he was changing with family members. His mom would come to some of those sessions as well to work out her own feelings toward him. For there to be no contact between the daughter and the son until the time the daughter was ready for it.

My patient tried to survive it all. Loving both of them. Being disgusted by her son's behavior. Feeling guilty that she had not known. Or stopped it.

What clinicians who work in sexual assault recovery are concerned about is the message the Duggar story gives to those victims. That you being hurt is not important enough for anyone to get punished.

Bobbi Parish, trauma recovery specialist, immediately put out a video for victims with a strong message of support.

Anyone who works in this field has heard countless cries.

"Everyone thinks he is so wonderful."

"I can't believe he did this to me, and because I can't prove it - it's "he said, she said," nothing is going to happen."

"She and her friends did it to me over and over. Mother knew and never said a word."

"How can he just get away with this?"

It is pure anguish. To know you were hurt by sexual abuse. And for nothing to happen.

There are people in our culture who have had personal problems, learned through them and then acted to help others. The founder of Alcoholics Anonymous, Bill W. Dr. Patrick Carnes - who has developed an entire treatment regimen and training for clinicians in sexual addiction, an addict himself. Betty Ford - who sought treatment for her alcohol problems and then began her own treatment center. Many, many others who are not famous. But go to high schools, churches or wherever they can get their message to the people that need to hear it. Talk about how easy it can be to make mistakes that hurt themselves and others.

Jim Bob and Michelle Duggar did not guide their son to be one of those people. They likely were protecting him from going to jail. Or perhaps their own reputation. I don't know. But it's at the risk of giving the victims the message, "your pain is insignificant."

Josh Duggar, as an adult, did not choose to be one of those people, either. It would have been a difficult decision. He would have had to talk with his victims. Get their permission. Instead, he and his family kept the secret. He could have been someone who helped others to see that these kinds of problems exist in all types of families. From the most conservatively religious to the most liberal.

Maybe he still will.

You can read more of Dr. Margaret at http://drmargaretrutherford.com!. SUBSCRIBE and receive a free copy of her eBook, "Seven Commandments of Good Therapy", a basic guide to selecting a potential therapist or how to evaluate your current therapy.