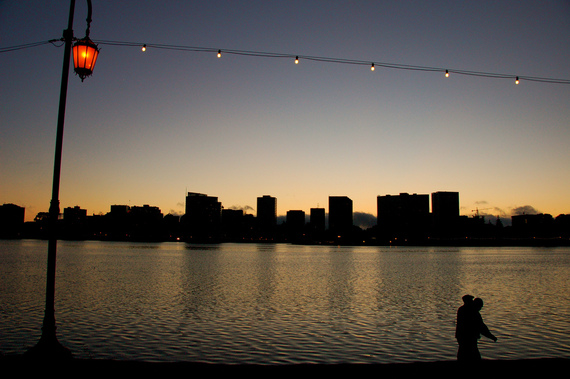 Oakland, California, a city of struggle and progress, is looking for the answers. Just like climate change, the city's problems often feel unfixable, but Oakland's healthy policies make us global leaders in the climate change fight.

In December, I attended COP21, the UN Climate Change Conference in Paris. It was a unique experience; a space for world leaders and multibillion dollar deals where a student like myself sat next to Al Gore on the bus. However, the local aspect of climate change seemed far away. The Paris Agreement barely mentions the personal health connection.

While the international agreements are important, the real work happens at home. Mayor Schaaf represented Oakland in Paris, stating, "Cities are where it is at! [Together, cities] can potentially have a bigger effect than some of the wimpier national commitments."

Oakland is an internationally recognized standard for the change Paris hopes to inspire. At COP21, people offered congratulations, rather than a cringe, when I said I was from Oakland.
Oakland's per-capita emissions are already 68% less than the average city in the United States. By 2050, Oakland will reduce emissions by over 80% compared to 2005. Under Schaaf's leadership, Oakland continues to invest in health through the Green Building Ordinance, LED lighting and the new Bus Rapid Transit. "This is not just an environmental improvement. It is a health improvement," says Schaaf.

It's not only public officials behind this change, it's also local heroes like Margaret Gordon. In 1992, Gordon was working as a housekeeper when she saw environmental magazines that helped her realize the connection between the Port of Oakland and her West Oakland community's poor health. Children in West Oakland were seven times more likely to be hospitalized from asthma attacks compared to California's average. Gordon and her grandchildren were sick. Since then, Gordon fights tirelessly as a community advocate through the West Oakland Environmental Indicators Project. Now, idling diesel ships are required to plug into electric energy and trucks doing drayage have cleaner engines. Black carbon emissions declined by 75%.

It's important to remember the power of individual and community activism as even now, the Port of Oakland tries to transport coal through West Oakland.

Some corporations are championing the fight. Oakland-born and based Kaiser Permanente protects both the people and the planet's health. In Paris, Kaiser was represented by Kathy Gerwig, their Environmental Stewardship Officer and author of "Greening Health Care." Gerwig says "We're installing solar because we care about health...solar in our facilities equates to health in our communities." Kaiser intended to reduce emissions 30% by 2020. This goal will be reached in 2017.

Gerwig believes "The best thing we can all do is be healthy. The healthier you are the less impact you have on the environment." Kaiser also lowers emissions by encouraging healthy behavior. Kaiser's David Mays notes, "We know that every public transport trip begins and ends with a walk. That's something that everyone can do to reduce their carbon footprint." Through the Every Body Walk campaign, Kaiser supports safer and more walkable communities. In the future, Mayor Schaaf hopes to work with Kaiser to make Oakland "the healthiest city in America."

Oakland demonstrates that fighting climate change is possible and positive. The struggle for a healthier climate is in our backyard. The Paris Agreement is not the end, but rather the beginning. The choices we make have local and global impacts. What will you change?