I've been trying to figure out why I've been a tad overwhelmed lately. Is everyone's life this crazy? Is this how people do things? Should I have seen this coming? Then I realize that I'm an artist (athlete), with some very intense volunteer work that I do in my spare time that I don't have. And then I realize that I've only recently made a comeback to my craft. And that's quite the tumultuous feat: A unique one, in fact, to which not many can relate. So in an effort to ward off feelings of isolation, I started looking into other comeback stories. And brace yourself -- because these will blow you away:

Like most dancers, Puanani Brown has worked hard her entire life. After training at the School of American Ballet for years, she was a trainee with the New York City Ballet, pushing herself every day to prove she was worthy of a position with the company. But at the end of her traineeship, she was not offered a contract. Completely deflated, she began her undergraduate studies at Harvard, diving into academics and exploring the world outside of dance. After one year of this, however, she was determined to dance professionally -- for herself more than anything. She immersed herself back into training, and was eventually offered a contract with one of the world's most prestigious companies -- the American Ballet Theater.

Similarly, Kaitlyn Gilliland was just featured on a stunning cover of Dance magazine as one of the most successful freelance artists in New York. She left the New York City Ballet after years of work, plagued with injuries and emotionally distraught. She, too, immersed herself in academia. She enrolled at Columbia University as a premedical student, working a bit with the Columbia Ballet Collective. But she's since become involved in various contemporary works, which have turned into a busy schedule, new artistic boundaries, and international performance collaborations.

And probably the most inspiring and the most dramatic of them all: In 2012 Jessica Chen was in a rollover car accident that nearly killed her. She was in a coma for two weeks, and underwent extensive brain surgery. Recovering from this required learning to walk and eat again, and dancing even at the recreational level seemed pretty much out of the question. Not only has she made a professional comeback from this, but she's also premiering an evening length work at the Ailey Citigroup Theater this month. I had the pleasure of watching a preview of the work recently. What really resonated with me was how visceral all of the movement was. As one grows older as a dancer, it becomes evident that the more life experience you have the more you can bring to the stage. This is quite apparent in Ms. Chen's emotionally charged movements and choreography. Ms. Chen recently gave a Tedx talk about her story, tying in elements of her travels around the world with the slow crawl from merely survival to professional production. This makes my comeback seem like a sneeze, and adds some dimension to the performance that I'm very much looking forward to watching. To quote my favorite, Audrey Hepburn: "Nothing is impossible. The word itself says, 'I'm Possible.'" 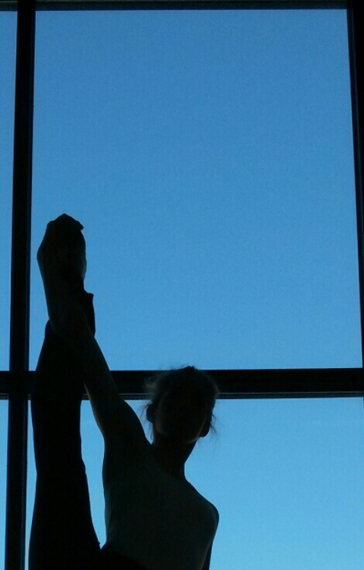