Carrying an extra twenty-one pounds of baby on your back as you climb out of the Grand Canyon during a hot day in July isn't easy. At least, so I've heard. My partner did most of the heavy lifting. As we emerged from the canyon, the weight began to lift off of our tired legs. Unfortunately, that weight made a beeline for our hearts, which sank upon learning the ugly details of Philando Castile and Alton Sterling's untimely deaths. It would be another day or so before the news would reach us of the tragic shooting by a lone gunman of several police officers in Dallas, who were on duty during a peaceful Black Lives Matter protest.

Our family trip to the Grand Canyon was bittersweet. As a new mom, of an adopted black son, the story of Philando Castile's death hit me the hardest. He was shot and killed by a police officer in front of his girlfriend and her four year old daughter after being pulled over for "driving with a wide nose." By now, you should have all heard this story and, unfortunately, countless others.

It wasn't very long ago that I was pulled over for speeding. We were on our way back from Shenandoah National Park where we had been celebrating Father's Day. My son was sick and tired of being in the car and he was making his restlessness known. So I, a white woman with a notorious lead foot, picked up the pace. I was pulled over for reckless driving in the state of Virginia. The officer asked why I was speeding. I told him my son was crying and I just wanted to get home; I told him that I was sorry. He gave me a speeding ticket and let me know he wasn't going to give me a reckless driving charge. I've been pulled over for speeding more times than I care to admit. Never have I feared for my safety. Never have I wondered whether or not I should reach into my glove box for my insurance card, which I have always done without thinking twice. Never have I been asked to step out of my vehicle. Never did my parents give me "the talk" (at least not the driving while black talk). What if I hadn't been white? Will my son's experience be different as he matures from a sweet innocent baby into a beautiful black man in America?

When I started drafting this blog, my plan was to write about the Centennial of the National Park Service. Over the last 100 years, we've protected over 400 national parks, monuments and historic sites. Since my son was born just over a year ago, we've made it our mission to get out and see our country's magnificent public lands. Last June, when my son was just two weeks old, we went to the Everglades; he slept through his first alligator sighting. In September, when his adoption was finalized, we went to Shenandoah for the first of what would be several trips to the park as a new family. We've gone on short hikes in Prince William Forest Park and Rock Creek National Park near our home in Washington, DC. And earlier this month, we went to the Grand Canyon to celebrate my partner's birthday - he was born on the 4th of July. 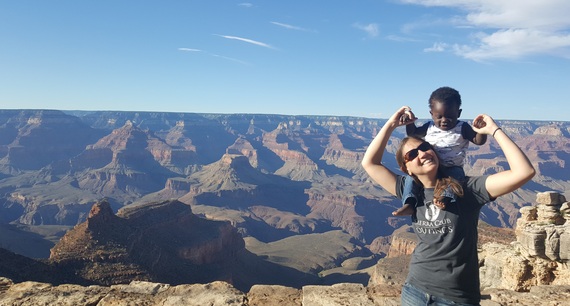 I could write about the awesome geological formations of the canyon, or the two California condors soaring overhead as we entered the park, or the warm smell of pinyon pine needles baking in the hot sun, or how my sweet little boy is quickly becoming a fish - splashing and swimming every chance he gets. I could write about the threats to our beloved Grand Canyon from nearby uranium mining and the importance of expanding its protection for future generations.

But my heart is heavy with sadness and worry. It's a mom's job to worry, right? I am sad because our black and brown brothers and sisters have been let down by our system. I am sad because far too many white folks are standing on the sidelines, sitting out this fight, or worse yet dismissing the Black Lives Matter movement (the civil rights movement of our time) with statements like "All Lives Matter" which undermine the important call to start valuing black lives as much as we already value white lives.

I am worried because the love of my life is a little black boy who will have to face the harsh realities of systemic racism as he ages. I worry whether I will be able to teach him empathy and resilience; to prepare him to not just survive but to thrive in this world. He'll face adversity for sure. I wonder if he will continue to feel welcome in the parks and public lands we've been introducing him to over this first year of his life - the places where I have been privileged to find solace, healing and even hope.

Just last month on the heels of the horrific shooting targeting the LGBTQ community in Orlando, President Obama took his family to Yosemite National Park. While there, he gave a speech honoring the Centennial of the National Park Service, and highlighting the White House's Every Kid in a Park initiative to ensure all kids have opportunities to enjoy our public lands, waters and shores. After taking photos and shaking hands, President Obama and his family went for a hike. Just them. No cameras, no press, no special guests. I can't help but think after a really hard week, time in nature might have helped the President to reconnect with his family, and in the shadows of the ponderosa pines and granite cliffs, the President might have found a little solace, a little healing and even, a little hope.