Last week, I talked about a high-poverty high school that has improved tremendously in the last 12 years. Today, I report on one aspect of that improvement: school climate and culture. 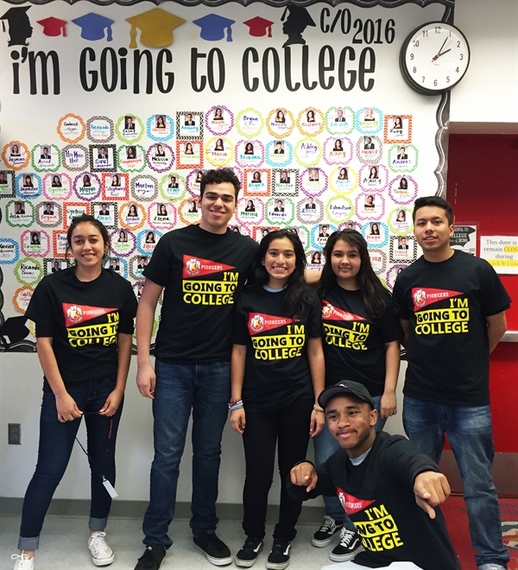 Members of the Class of 2016 announcing that they are headed to college.

Almost 12 years ago, Sergio Garcia became principal of Artesia High School, a school smack in the middle of a neighborhood in Southern California that has seen its share of gang violence. In fact, Rosie Gomez, who is today dean of students at Artesia, had herself been caught in the middle of a drive-by shooting when she was a student at the school in the 1990s. "It was terrifying," she said.

Fights were common at the school, and teachers were fed up with the continual disruption by students who flowed in and out of their classes, seemingly at will. "It was nothing like what it is now," Gomez told me.

At Garcia's first meeting with the staff, he asked the teachers what kinds of changes they most wanted him to make. The teachers' unanimous response was that they wanted him to "stop the 'tardies.'"

"Students would come in 30 minutes into class," one teacher said, adding that real instruction was impossible under those conditions.

When Garcia counted 230 late students in the first 20 minutes of school one day, he saw the magnitude of the problem in the 1,500-student school. Each tardy student represented two interruptions to instruction: when students showed up in class and were told to go get a pass from the office and when they reentered with the pass. "Do that five times, and how much teaching can really go on in a 50-minute period?" Garcia asked.

Garcia agreed to solve the problem of students being late to class. "But in exchange -- because nothing comes for free -- the teachers had to promise me they would teach bell-to-bell and show no videos unless related to the curriculum."

This demonstrates Garcia's approach to improvement -- both instruction and student behavior needed to improve simultaneously in ways that reinforced each other. It also illustrates his desire to ensure that teachers feel they have a voice in how the school operates. "I hate when I'm told to do something," Garcia said. "But if you give me a voice, I will follow."

For the short term, Garcia set up an in-school suspension room for anyone who was late. "Within three days, we were able to get it under control," Garcia said. Now, on an average day there are just 15 students coming in late, rather than 230.

"We have changed the culture."

Garcia acknowledges that he and his fellow administrators still exercise a bit of a heavy hand in terms of discipline, in part because they have seen how far the school could fall without structures, systems, and enforcement. "We'll suspend students," he said. But even during a student's suspension, the school might bring him or her back for counseling, for a session of restorative justice conducted by an outside organization, or even for a special lesson that's important for a class.

In this way, the school reinforces the idea that discipline is not just about punishment but about ensuring that students get an education.

Garcia realized that fact the first time he handed out T-shirts to students who either had a high grade point average or had improved their grade point average. "The first time, kids put the shirts in their backpacks. They didn't want to be seen as scholars," Garcia said. "A kid told me that he had to get out of here. 'If I get good grades here I'll get beat up.'"

"We decided," Garcia said, "that you have to do mass recognition to make it ok."

This was part of a strategy developed with Dennis Parker, a consultant brought in by Garcia at the very beginning of his tenure and who continues to be involved in the school. Parker drew on the work of Claude Steele to say that students find safety in numbers, and if enough students are recognized as high-performing, they will embrace that identity. That is one reason the school always recognizes not just absolute performance, but improvement. "Even if they are moving from a low F to an F+," Garcia said. "Sooner or later they move into the achievement category."

In addition, every classroom has a data wall, which tracks how students are doing on quizzes, tests, and assignments. "Now," Garcia said, "it's not cool to not do well. The big turnaround for us is that kids want the shirts and are proud to wear them."

Next week: Improving instruction at Artesia.