For the past two weeks, I have been writing about a high-poverty high school that has improved tremendously over the last 12 years. Today, I report on one aspect of that improvement: the quality of instruction. 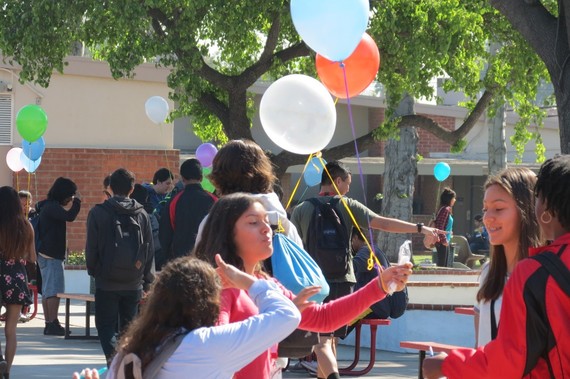 Students with perfect or improved attendance were given balloons to carry one day.

When Sergio Garcia became principal of Artesia High School in Los Angeles County, the fact that it was summer gave him the opportunity to take advantage of one of the biggest levers of change available to a principal: creating the master schedule.

"We had very few students taking algebra," he said. Most students, he said, were taking pre-algebra or consumer math. "And they were failing."

So the first thing he did was put 1,300 students who had been scheduled for "basic math" into Algebra I. When returning math teachers found out, they assumed that Algebra I would be spread out over two years. No, Garcia told them. One year. He wanted his students to be able to go on to higher math. If they were to have any chance at all of going to college, they had to take the math classes that would get them there.

"I can't be at a school that perpetuates the idea that these kids will be poor the rest of their lives," Garcia said, basically agreeing with the argument that unless students succeed in algebra their opportunities would be foreshortened.

He put some of the students - those with lower math scores - into a second math support class, thus "double-blocking" them. But they were all in Algebra 1. "And they were mostly successful," Garcia said. That is to say, test scores went up and failure rates went down.

Stephanie Palutzke, a special education math teacher who arrived a couple of years into Garcia's tenure and said she was shocked to find that she would be teaching Algebra I to students with disabilities. "I can't teach a pre-algebra class?" she remembers asking Garcia. "Algebra is too hard for my students." At other schools, she said, she had taught consumer math. Garcia told her no.

Despite her misgivings, Palutzke, who is now one of the school's union representatives, said, "We found a way to teach algebra and [the students] passed the high school test."

That first schedule change was only the beginning of a series of instructional changes, all of which were aimed at expanding opportunities for students.

"We have a formula, said Carlos Guzman, the chair of the foreign language department: "High expectations + opportunities = success."

Artesia's "secret weapon" in improving instruction, Garcia said, is Dennis Parker, who was once an official with the California Department of Education and now consults with schools around the state. He had consulted at each of Garcia's previous schools, and Garcia also brought him to Artesia. Parker observes classrooms and leads workshops for teachers to help them improve instruction, always urging them to ensure that they are providing the "maximum number of interactions per minute with complex knowledge" in order to create the "aha" moments that lead to new learning.

Parker's basic improvement strategy is that at the classroom and school levels, clear targets need to be set, clear feedback mechanisms need to be in place, and teacher know-how needs to be developed. When those things are all working together in ways that take into account the individual classroom and school context, they spiral together to keep improvement going, Parker says.

"Educators are less likely to oppose this kind of change, as it is helping them learn to be more effective with their students, not mandating them to follow a new regimen," is Parker's view.

He helps teachers set ambitious academic targets for their students and develop careful feedback mechanisms. Every classroom at Artesia has a data wall where students chart their progress on quizzes, tests, and assignments, and a space on that wall for students to add their names to those of others who are either scoring high or who have improved their performance. By having those two criteria, the school is providing "safety in numbers," Parker says, and building success into the culture.

"There are a lot of visuals that celebrate success," is the way Carlos Guzman put it. "I've been here 10 years -- I was hired by Sergio. The only thing I know is data walls and collaborative learning."

Guzman is referring to the fact that the post-Garcia master schedule builds in common planning times for teachers in departments to plan and learn together -- another change that helped build the kind of culture that many teachers call "like a family."

But Garcia no longer builds the master schedule by himself. At the end of his first year, he brought together his leadership team -- administrators and department chairs -- and they created the next year's master schedule together. "It took us a week to build it," said Will Napier, the chair of the special education department and the second union representative. "Everyone had their own program that they wanted to push. Now, we're able to do it in a couple of days, because if it doesn't work for the greater good, we know not to argue for it."

Added Garcia, "I have 13 people to defend the master schedule."

Questions do arise, especially because the school has added many Advanced Placement classes and has enrolled many students who would not necessarily be considered prepared. "We're putting kids in there who are not 'AP kids,'" said Cecilia Hawn, chair of the mathematics department.

"We believe our kids can do whatever other kids can do," added Felicia Godinez, chair of the social studies department.

That doesn't mean they don't recognize the needs of their students. "We have a two-week AP camp in the summer to get them ready for the higher expectations; kids know they're at a huge disadvantage if they don't attend," Hawn said.

Scheduling, new courses, and data walls are hardly the sum and total of the improvements in instruction at Artesia, but they were integral to building the systems that allowed teachers to work together.

Garcia said that even when he arrived in what was then a low-performing school, he could see there was good teaching; it was a matter of ensuring that teachers worked together rather than in isolation to make sure that students experienced success.