At the beginning of the great Hindu epic, The Ramayana, the sage Valmiki takes an early morning walk with a student in a beautiful forest, by a river. Valmiki is ecstatic about the beauty and peace of the place, and praises the pure water for being like a good man's heart. He bathes and prays there, and drinks from the stream. 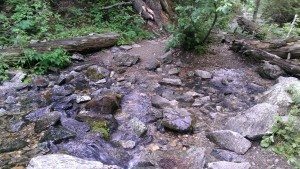 Then, just as he notices a pair of curlews mating on the banks of the stream, a hunter (with evil intention) shoots the male bird and the female bird's wrenching cries of grief fill the air.

Valmiki's own sadness at the slaying of the male bird takes expression as the first "sloka" of the Ramayana. Lord Brahma himself visits Valmiki's hermitage and advises Valmiki to turn his soka (grief) into sloka (verse) and recite the story of Lord Rama.

It is moving to think that profound grief about man's disregard for nature, man's cruelty to other life, is what led Valmiki to recite the entire Ramayana.

Further on in the story, Rama and his brother Lakshmana are sixteen-year-old princes. Their father, King Dasharatha, has given the sage Vishwamitra his word that Rama will go with him to kill some terrible demons that are wreaking havoc with the prayers of the sages. Dasharatha is plagued with paternal love and fear, and tries to take back his promise. His advisor, sage Vashishta, counsels him to keep his word, and one reason he gives is that if Dasharatha goes back on his word, he will incur a consequence as grave as the destruction of the rivers and lakes in his kingdom. That is, not keeping one's word (acting dishonorably, or not according to dharma) is a deed that brings demerit (paap) equivalent to the destruction of nature. This rings so true today, as we see the devastation of climate change, a man-made disaster caused by man's failure to respect nature.

As Pope Francis stated in his recent Encyclical on climate change, Laudato Sii ("Praised Be"), the reality of climate change "represents one of the principal challenges facing humanity in our day."

He blames the crisis, among other things, on human greed: "Our 'throwaway culture' prioritizes the accumulation of wealth for the few over the flourishing of the many and of the good of nature itself. To authentically address the environmental crisis, poverty and economic inequality must be done away with."

Through this Encyclical, the Pope has invited every person on the planet into dialogue on the many pressing ecological issues facing humanity - and their impact on the poorest people of the world.

As I read the Ramayana and lose myself in the beautiful descriptions of forests, lakes and roaring confluences of rivers, each such site is revealed to me as holy. I am filled with renewed conviction that the only thing I can do in the face of gargantuan challenges such as global warming and global hunger and poverty is to try and keep my heart as clear as the river where Valmiki bathed, and learn to transform my grief and despair into selfless service (seva).


Holy places have boulder, water.
God's truly among the good.