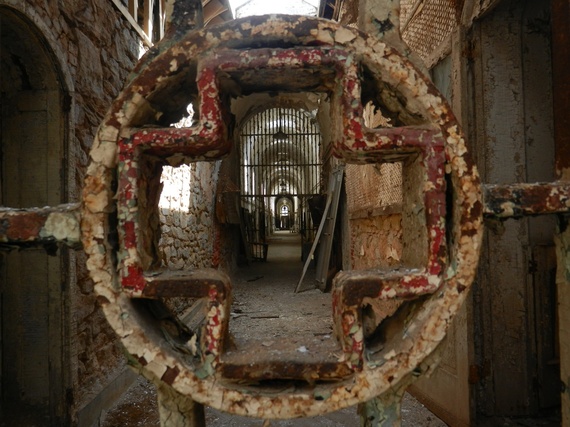 I believe that very few men are capable of estimating the immense amount of torture and agony which this dreadful punishment, prolonged for years, inflicts upon the sufferers; and in guessing at it myself, and in reasoning from what I have seen written upon their faces, and what to my certain knowledge they feel within, I am only the more convinced that there is a depth of terrible endurance in which none but the sufferers themselves can fathom, and which no man has a right to inflict upon his fellow creature

The idea of punishment for transgressing perceived societal norms could be extrapolated in biblical proclamations calling for an eye for an eye or a tooth for a tooth. The Biblical era espoused punishment as the principal response to crime; it was thought punishment would help to maintain the distinction between right and wrong, thus promoting a more just/moral society (Bonomi, 1986, Kann, 2005). As society advanced, this underlying belief continued to influence Americas approach towards crime and punishment.

Criminal justice philosophers and scholars have identified three main components relating to punishment over several centuries beginning with the retributive (Post-Revolution), moving on to the utilitarian (Pre-Revolution), and finally the rehabilitative (Reform Era) (Smith & Natalier, 2005). They all represent distinctly varying ideologies regarding the response to crime; the reform era in particular would take on various transformations in the way it responded to crime and prisoners, going from a clinical/medical model of treatment, to a more antiquated approach (get-tough on crime). Yet despite the purported proclamation of scientific and cultural enlightenment, the punitive ideology representative of earlier responses to crime seems to have permeated the very fabric of the criminal justice system in the United States.

Prior to the American Revolution, American colonies relied on sanguinary punishment such as public whippings, pillory, mutilations and even castrations in some cases (more in line with England's abominable "blood codes") to address crimes and other acts of civil disobedience. "Religion was clearly the salt that flavored colonial life and it permeated every aspect of life"...so it was no surprise that crime and sin were viewed synonymously (Blomberg & Lucken, 2010, p.13). The lack of distinction between crime and sin, informed and perpetuated a belief that it was thus the work of the devil and not worthy of further exploration. The answers were to be found in the religious paradigm that permeated life in the early colonies (Blomberg & Lucken, 2010).

Specific emphasis was placed on public displays of punishment as a means to thus deter further commission of crime in the mostly homogeneous colonies. Communities were self-contained with little turnover or change within the population. Thus the response and impetus of punishment served more as a deterrent and means of conformance, hoping to draw deviant individuals back into the fold (Hirsch, 1992).

It was said that colonial authorities and their brand of punishment often mirrored that of "a stern father seeking to mend the ways of their wayward children" (p.5). In a public confession prior to being executed in 1789 for robbery, Rachel Wall's public confession mirrored that of a disobedient child. She confessed not only guilt associated with the commission of crimes, but she also confessed to lying and stealing to her family, as well as breaking various religious verdicts such as holding Sabbath (Williams, 1993). Respecting the Sabbath during colonial times was considered sacred and to be upheld at all times. Friedman (1993) elucidated accounts of men being fined for being absent too frequently from church, or punished for behaviors deemed inappropriate, such as report of a sailor returning from years at sea and kissing his wife in public.

Children didn't fare much better. It was reported that those who did not obey their parents could be "severely punished, or even executed (in rare cases). Respect for parental authority was considered a precursor to religious discipline and civic responsibility (Blomberg & Lucken, 2010).

Social control was loosely regulated by a few members within the colony who acted in a quasi law enforcement capacity as the formulation of a systemized form of social control had yet to exist, and really was not required given how close knit the towns were. In colonies considered "backcountry", it was not unusual however to have breakdowns in the systems of social control. The response however was usually swift and severe by members within the colony upon the perpetrators to thus preserve a sense of community. And if the perpetrators happened to be from outside the community, the retribution would be exponentially more brutal (Blomberg & Lucken, 2010).

In an act from 1792, it was stated that the punishment for those convicted of idleness (willingly not working) be whippings and hard labor (Vale, 2000). Generally speaking, it was said that there was a punishment or fine for just about anything-deemed offensive. Efforts to rehabilitate "offenders" were inconceivable as colonists had no real expectations of eradicating crime by curing or fixing offenders...the purpose was, in the end, primarily retributive" (Blomberg & Lucken, 2010, p.18).

If you have enjoyed reading thus far? The article in its entirety can be found here: A History of Prisons