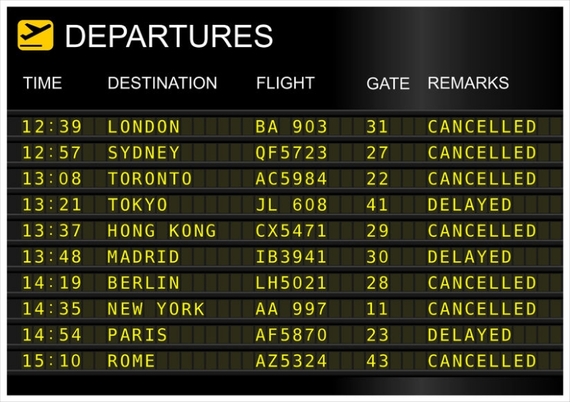 Seeing loved ones and catching up with friends are some of the things we look forward to when we book those holiday trips. Needless to say, we have all experienced some bumps in the road trying to make it back home after Thanksgiving or making it in time for our aunt's Christmas lunch. With more travelers and tricky winter weather, the normal backlog of flights compounds during the holidays. But rest assured, Travelle has your back on how to avoid some of the holiday travel pitfalls so you can relax and cherish family time.

The Early Bird Catches The Worm

Since air traffic problems start to affect more flights the further into the day you get, you're less likely to run into issues if you depart in the early morning. With more travelers and tricky winter weather, the normal backlog of flights compounds during the holidays. A study done by the Department of Transportation showed that 86.2% of November and December holiday flights scheduled to arrive between 7 a.m. and 8 a.m. arrived on time. In stark contrast, when flights were scheduled to land between 8 p.m. and 9 p.m., only 67.5% made it on time.

While connecting flights are often the best value, if every time you fly home to you get stuck en route to see family, maybe it's time to reconsider and pony up the extra cash. When weather starts affecting flights around the country, it creates problems everywhere. If you can't avoid connections - try to choose connecting cities unlikely to experience weather delays and experience less air traffic in general.

Checking back always adds an extra wrinkle when making last minute flight changes or missing connections. If at all possible, carry on to have the most flexibility when rerouting or rebooking flights. There is nothing worse that not being able to get on that next flight with your bag stuck on an airplane that you can't access.

Talk To The Airline

Load your phone with your airline's toll free numbers, apps, and Twitter accounts. When you get that alert via email or text that tells you to reconfirm 24 hours prior to travel, do it! If you know you are going to fly into any weather trouble spots, keep a closer eye than normal on your email notifications. Contact to the airline and express your concerns. In some cases, they may be able to re-route you to avoid bad weather, usually for no charge.

Always check your flight departure status before you leave the house on your travel day. If your flight gets canceled for bad weather, you can handle rebooking from the comfort of your home rather than wandering around the airport and standing in endless lines to speak with a representative.

When an announcement is made that your flight has been delayed or cancelled and you're already at the airport, go ahead and get in line at the gate to get rebooked, but do yourself a favor and also immediately call the airline's 800-number. The agents at the airport are dealing with a whole plane (or multiple planeloads) of disgruntled passengers, while the customer service staff sitting in a call center and are under less pressure. They may also have access to other options than the folks scrambling in crisis mode.

You might be tempted to tweet out a complaint while waiting. It can be an effective tool to use if needed, but be mindful that the days where a furious tweet gets immediate action are mostly over. A polite tweet to customer service asking for assistance will go further than a fury-fueled rant. The airline can ground anyone they see as disruptive, so Tweeting obscenities (and calling out gate agents by name) can come back to haunt you.

Avoid Major Cities (Unless You Live There!)

Yes, it's true. While most people have an affinity for the Big Apple, the airports servicing the city make up three of the top 5 airports with the worst holiday delays record in recent memory. At the same time, don't assume that an airport that typically sees a lot of bad weather is going to hold you up. Detroit and Washington National have much better records, owing to their state-of-the-art facilities and infrastructure for dealing with storms.

Be Kind Under Stress

This might sound like a no-brainer, but it's an important one to remember. The gate agents trying to get you from point A to point B are under a tremendous amount of stress and have only unhappy people to deal with. Yelling at them, making angry demands or being insulting is not going to endear you to anyone and may, in fact, boot you to the back of the line. Take a deep breath, take a walk or go grab a cup of coffee if you're about to lose it. If you're not getting the result you need or if someone is being truly unhelpful, a polite complaint letter will often reap rewards that shouting in the airport will not.

Still stressed out by flying? Try this to soothe a frazzled mind.