It is the right of all children to grow up with food and education. Yet so many go without. But if we can give children worldwide a holiday gift, why not let it be school meals for the New Year.

The need is huge. The UN estimates there are 66 million children globally who attend classes hungry.

An additional 67 million children globally do not even make it to school because the food shortages are so extreme they have to work in order to feed their family. That is about equal to the entire population of New York, Florida and Texas. Imagine if every person in those 3 states never attended school because of hunger.

The recent escalation of conflict in the Middle East and Africa has left millions of children displaced, hungry and lacking education. Even the Ukraine, where the World Food Programme had never operated before, needs food assistance. We have not seen this level of suffering since World War II.

But that history also tells us that we can feed more children in times of great need, as we did after World War II when famine threatened. We fed children overseas in the war-torn countries. School meal programs were started. At home we even began our own National School Lunch Program in 1946.

Today, we must continue that quest to feed all children.

This year a mountain climber in Nepal, Nimdoma Sherpa, unfurled a UN flag in the peaks calling for zero hunger. She would know most of all. For as a child she received school meals from the World Food Programme. That gave her the strength to grow and learn.

Now Nimdoma is a record setting climber along with her team, the Seven Summit Women. Since an earthquake struck Nepal they have been using their climbing skills to bring food to remote mountain villages. They have prioritized food and education for children. Volunteers from the United States have joined them. 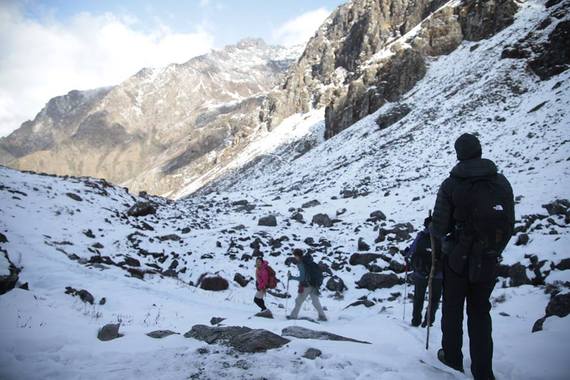 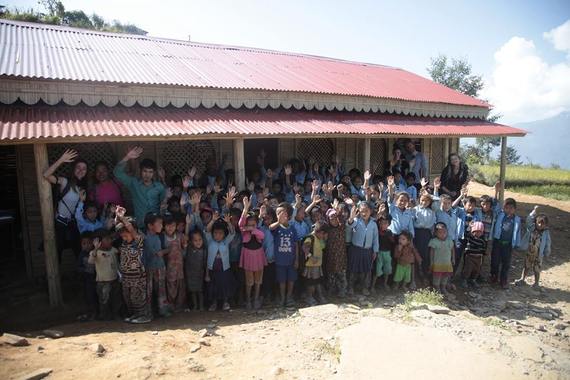 They set a great example of how determination can help children. We need to see that from everyone from our leaders in government to business and to the public.

We hear so much in the news about the refugee crisis from Syria's civil war. Not enough is heard about ways to help the Syrian children who have been displaced throughout the Middle East.

The food at school helps refugee families who are struggling in poverty. Lynn Teto, kindergarten teacher in Lebanon says, "The impact has been that the children are coming to school more frequently. They're gaining weight, which is great. They're energetic, they're happier in general. They're how kids should be. Not hungry." We need to expand the Mercy Corps school lunch program. 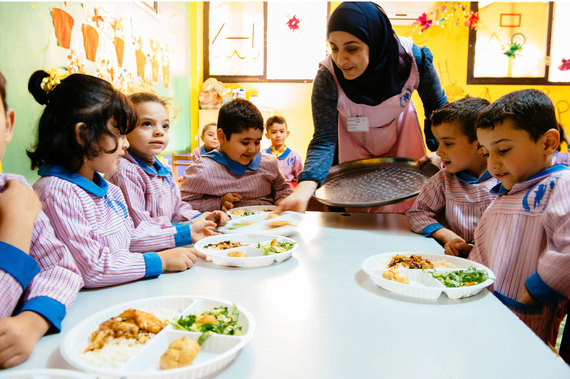 The Mercy Corps school feeding program should be expanded to all refugee children. (photo courtesy of Corinna Robbins/Mercy Corps)

All the refugee children from Syria, Iraq and elsewhere should receive the school meals. Remember we have done this before when we expanded the school meals in Germany, Austria and Japan after World War II.

Congress could increase child feeding both at home and abroad through its legislative process. We could expand our Food for Peace and McGovern-Dole international school lunch programs.

At home we could fill in gaps in our child feeding. We could take initiatives like the Power Pack program started by Cincinnati's Freestore Foodbank and expand that nationwide to make sure low-income children have food on weekends.

The costs of funding child feeding are relatively low compared to spending on nuclear weapons, for example. It's really about political will and having the vision to see what school meals can do for children.

The public can encourage the Congress to act on child feeding. Our actions speak volumes and will set an example for Congress.

This holiday can be one of giving, of feeding hungry children everywhere. What a holiday gift to the world's children it would be to give them school meals for the year. Their hunger would end, their hope restored, and the road to their dreams could begin.