At the Google Zeitgeist conference last month, there were two really powerful moments for me. The first was when community activist Majora Carter broke down and wept when talking about the shattered lives in America's inner cities -- including the South Bronx, where she grew up and continues to work.

The other was when multiple-award-winning ad exec Rich Silverstein walked the audience through his picks for what he called "perfect moments" from the history of radio, movies, and TV -- evocative moments of great emotion and humanity (these included Abbott and Costello's famous "Who's On First?" radio broadcast, as well as scenes from Seinfeld, The Sopranos, Fargo, and Dr. Strangelove). And he talked about what he feels is one of the few truly powerful moments to be found online -- YouTube video of unassuming mobile phone salesman Paul Potts' goosebump-inducing performance of Puccini's Nessun Dorma on Britain's Got Talent.

Silverstein, who as co-chairman of Goodby, Silverstein, and Partners was behind the famous "Got Milk?" ad campaign and the Budweiser frogs, had such a grasp of what makes for effective communication in radio, movies, TV, and online, that I thought he might have some ideas on how to help the Democrats, who continue to struggle with framing an election where they are holding all the cards. He did. When I suggested that he blog about his ideas, he said that since he usually expresses himself best in visual terms, he wanted to see if he could "blog visually."

The result is three powerful posters that simply but graphically capture the lunacy of the modern GOP. "Here is my thinking," Silverstein told me, "What if we could TiVo the last six-plus years and play them back - without comment -- for the American people, and let them connect the dots? It's not a pretty picture." Silverstein's take away message is uncluttered and direct: "Haven't we had enough? Democrats '08."

You can check out the posters by clicking on the images below. But looking at the posters is just the first step. Consider them rough drafts. And we want you to help with the rewrites by adding to the names, events, and slogans depicted in the posters. Simply post your suggestions in the comments section below (labeling them "Names," "Events," or "Slogans"). Rich and his designers will take the best and include them in updated versions of the posters, which we will put up on HuffPost after Thanksgiving.

Ideally, says Rich, the final versions might be three feet long. Given the outrages of the last six-plus years, even that might not be long enough.

So look at the posters and send us your suggestions below. 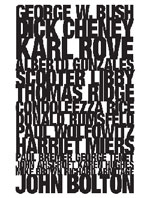 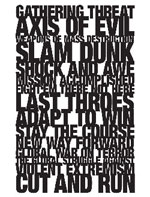 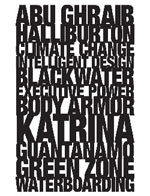