If you've grown weary and cynical about Hollywood's non-stop attempts to remake anything -- and remake it poorly -- then you're in for a rare treat with Star Trek, which beams into theaters Friday.

Please check out my feature cartoon in this week's Village Voice, which reviews the film and ponders its odd man out, William Shatner.

But in addition to being great entertainment, J.J. Abrams's Star Trek also taps the zeitgeist of the moment and will likely, and fittingly, become the first major blockbuster of the Obama era.

The original Trek arrived amidst civil rights milestones, a mistake of a war overseas, and sweeping progressive legislation from the White House. Sound familiar?

In 1966, Star Trek reflected a yearning to make the world (i.e. universe) better and find a way for people to live together peacefully. The crew of the Enterprise worked for the collective good.

Now in the post-Bush world (what a continuing joy it is to type those words), America's focus has again returned to facing our problems pragmatically instead of ignoring them. The return of Star Trek reflects the return to valuing science, the seeking of progress, the rebuilding of a Great Society.

Will right-wingers label it "Socialist Trek"?

Consider that Al Gore, the original Spock of politics, is now a prize-winning hero. And a quick google search for "Obama Spock" confirms how our president's cool logic in assessing the state of the nation can be seen as virtually Vulcan. There's even an Obama-As-Spock action figure.

And while the new Trek is a film with plenty of battle scenes, it's worth noting that it's clearly the bad guys who do the torturing, and that, after committing atrocities with weapons of mass destruction, the Romulans are at least given an honest chance to surrender instead of simply being slaughtered in retaliation.

Of course, the great thing about art is that people interpret it differently. In the course of working on my project for the Voice, I came to find that many conservatives find their values confirmed in the original Star Trek series. Will they do the same with the film, perhaps seeing Spock's seeming emotional yearning for revenge as a call for "staying the 'til the job is done" in Iraq?

Maybe. But one thing's for sure: as J. J. Abrams told TV Guide magazine, "I think a movie that shows people of various races working together and surviving hundreds of years from now is not a bad message to put out right now." He adds that, "It was important to me that optimism be cool again."

Indeed, it's the perfect message for the moment we're in.

Here's my cover for the Village Voice: 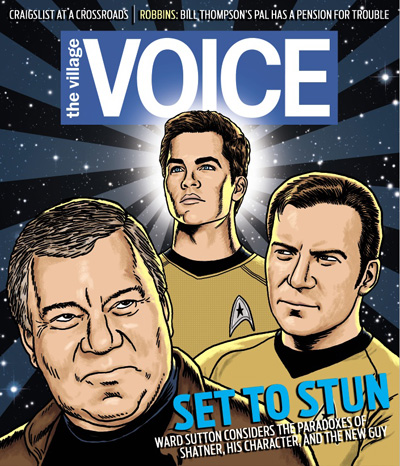