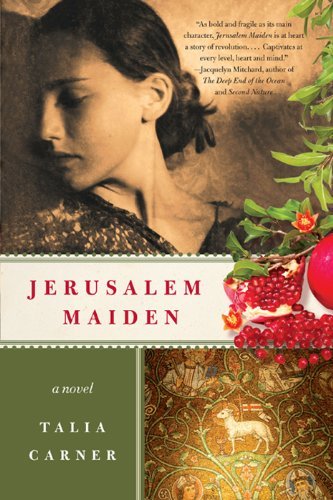 Let me begin by saying that when I finished reading the engrossing Jerusalem Maiden by Talia Carner (Harper Collins, $14.99), two thoughts flashed through my mind. First, that the inevitable ending was quite satisfying! And, second, that a number of the ancient cultural and religious rituals and practices among the ultra Orthodox Charedi Jews in Jerusalem at the onset of the twentieth century are still being followed, and not just by Charedim. I remember my own grandmother cracking one egg after another to search "its clear part for a red vein of fertilization that would render it impure." A practice I continue to follow. I remember my father reciting "Woman of Valor" from the Book of Proverbs to my mother on Erev Shabbat, as does Aba in "Jerusalem Maiden." I also remember that despite my own joy at giving birth to two beautiful daughters, to say that my mother-in-law was less than pleased would be an understatement. Not until I read the richly detailed Jerusalem Maiden did I realize that the Talmud, Kiddushin decrees: "Happy the man whose children are boys and woe to him if they are girls."

Jerusalem of 1911, at the end of the rule of the Ottoman Empire, was a mixture of isolated individuals -- Arabs, Charedim, Zionists, Chassidim and even a few Parisians -- with such conflicting religious and cultural beliefs you might think they lived on different planets. The animosity between Jews and Arabs is well documented, perhaps not so the resentment of Orthodox Jews toward the "brash" Zionists for fighting, for drying swamplands and for planning vineyards, instead of "waiting for the Messiah to bring salvation." Zionist women were disliked for their slack ways, their lack of respect to men, for speaking up in mixed company. Jerusalem was a miserable place for conservative Charedi women, yet, accustomed to familial and financial struggles, to the laws of the book and of the land, most of these women did not consider their lives that miserable. Working hard and bearing sons was a small price to hasten the arrival of the Messiah.

But the talented Esther Kaminsky, who has the courage and insolence to paint, a forbidden act, refuses to accept this life. Nor will Esther's Parisian teacher, Mlle Thibaux, who recognizes Esther's exceptional talent and does everything in her power to nurture it. But despite Esther's love and respect for her liberal teacher, "None of Mlle Thibaux's arguments carried weight with God." When Esther's God strikes her family with one misfortune after another, certain she is punished for the grave sin of "drawing Hashem's image," she sacrifices her dream, steps on her overwhelming desire to paint and swears to stop creating art.

After a short reprieve from misfortune, Esther allows herself to believe again, believe that her sins might not have brought "Sodom-and-Gomorrah-like wrath" after all, and it would be safe to leave her three children with her sister and join her husband in Europe. But once in the city of lights, the lure of Paris proves irresistible. Esther ignores her husband's letters to return home. Relishing her newfound sense of freedom among a community of Avant-garde artists, she allows her passions free rein, cuts her hair short, wears fashionable clothes, picks up her brushes and paints again. Perhaps Hashem intended her to be an artist, after all, she reasons. This is why He facilitated her journey to Paris and guided Mlle Thibaux and her son, Pierre, back into her life -- the goy sculptor Pierre, who is unfortunate enough to fall in love with a "woman who would be forever claimed and reclaimed from me by her God." The story gathers speed when Esther experiences a short period of happiness as a vibrant woman and an artist. But her wrathful God strikes again. This time more forcefully. The devastated Esther is certain that her sinful conduct in Paris instigated this last tragedy. But why would God punish an "innocent bystander for her sins!"

The main thread running through the story is Esther's continued struggle with her deep-rooted guilt and with God -- the story's main protagonist -- and the ongoing clash between her sense of responsibility to her religious mores on one hand and to her passions and desires on the other. Esther's tumultuous journey leads the reader to 1968 and back to Paris and to the gripping epilogue. We care for Esther. We pray that the older woman has learned to make peace with her God.