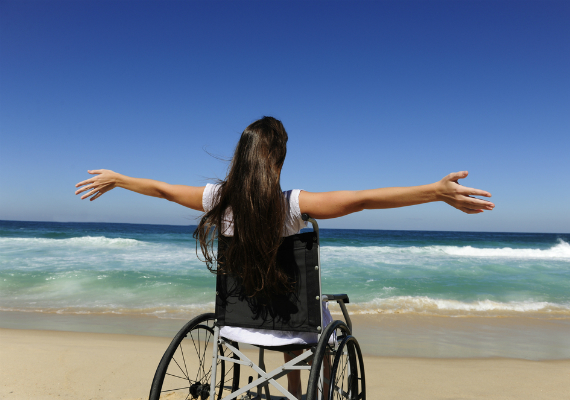 I did not know a thing about Jewish Disability Awareness Month (JDAM) until a member of my synagogue called and told me that she was going to make it happen at our congregation. As the founding rabbi of Adat Shalom Reconstructionist Congregation in Bethesda, MD, I still periodically lead services. It was determined by the powers that be that my Shabbat was the best suited to mark JDAM.

It is easy to mock the way that every issue under the sun gets a day or a week or a month in somebody's calendar but there is no question that it succeeds in raising consciousness. In the weeks leading up to the Shabbat, many members of the congregation came forward because their families were in some way affected by disability. This was a good thing; why should people who have so much to deal with feel that they need to hide their personal struggle with their disability or that of someone in their family? Some years ago I delivered a Yom Kippur sermon called "Healthy, Wealthy and Wise" in which I challenged synagogues to pay more attention to the people in our midst who were "none of the above."

It is precisely because our institutions tend to privilege the "abled" that we essentially make the disabled invisible. Even if the disabled do not experience outright exclusion because our synagogues are not handicap accessible or wired for those with hearing impairments many feel shunned when they do show up. Staying invisible is just easier for those who are disabled but it doesn't lessen the sense that the Jewish community is a private club catering to those who are indeed, "healthy, wealthy and wise."

The most radical teaching in the entire Torah emerges from Genesis 1:27, the idea that every human being is made in the image of God. The problem is that the phrase is more likely to be reduced to a phrase put on a poster than it is to be employed as it was intended by our sages -- to serve as a guide for our behavior with other human beings. The default behavior of human beings is to judge others based on how similar or different they are from us. The more different they are, the less likely we are able to really see them as "images of the Divine."

We turn many categories of people from "images of the Divine who we treat with respect" to those who we make into "the other." We do this based on age, gender, sexual preference, race, religion, ethnic/national loyalties and political ideology. And while many of us would most likely respond to an encounter with a disabled person with appropriate expressions of compassion, treating such a person as an equal or insuring that the institutions of which we are part make every possible accommodation so as to allow for the full inclusion of the disabled is well beyond our standard modus operandi.

As with so many categories of Jewish teaching, the "Jewish approach" to disability is a mixed bag. Several categories of the disabled, like the cheraysh (deaf-mute) and the shoteh (mentally deficient and/or insane) are neither obligated by the body of mitzvot (Jewish commandments) nor qualified to serve as witnesses in legal proceedings, essentially being in the same category as minors. The blind are obligated by the mitzvot but are not allowed to bring testimony in a trial.

In other places in our tradition, a disability or a disease is seen as a punishment from God for bad behavior. Leprosy is the punishment for talebearing. In the Talmud (Taanit 21a) a story is told of one, Nahum Ish Gam Zu, who had no hands, no feet and was blind in both eyes. These disabilities were not birth defects but brought about as a result of Nahum not being quick enough to feed a beggar before he died.

A third way that the Jewish tradition discusses disability is essentially used as a theological trump card. It is a way of saying that God's agency in the world is far more significant that human agency. Thus despite the fact the Moses is said to be "slow of speech", possibly a person with a speech impediment, he nonetheless offers the most important words in the Biblical story. The rabbinic commentators use this to make the point that Moses is simply an agent for God, serving as God's spokesperson in the earthly realm.

None of the above three Judaic treatments of disability are particularly sensitive by 21st century standards. I also fear what a disabled person, one who takes Judaism very seriously, concludes from such treatment in our sacred texts. From a theological perspective I am far more comfortable with the theology implicit in Harold Kushner's When Bad Things Happen to Good People, than I am with theological assumptions of the Biblical and Rabbinic texts. For Kushner, God does not cause disability, orchestrate natural disasters nor punish human transgression with disease. Rather God is the source of comfort to which we turn when trying to cope with such setbacks. God is a source of healing, not of affliction.

Many parts of classical Judaism are products of the thinking of earlier generations that may not fully reflect the most enlightened understanding of our time. Yet there is one insight on the issue of disability where Judaism was not only centuries ahead of its time, but where the insight is still well beyond the way most of us behave in the realm of disabilities.

The Jewish tradition prescribes a blessing upon meeting different kinds of people: a king; a wise person; a Torah scholar. The prayer prescribed upon meeting a person who is disabled or who suffers from a deformity is: Praised are You, Creator of the Universe, who makes people different, one from the other." Amazing!

The insight inherent in this bracha is that no two people are alike, that each of us is "differently-abled." One person can play piano; another might be skilled at computers; another can fix a toilet. A young man who was a member of my first congregation had Down's Syndrome. Every week when he greeted me at synagogue he offered me the most wonderful smile and the biggest hug that any person has ever given me. I came to look forward to Ben's expression of unqualified love that was not the least bit calculated or contrived. It was his gift.

I suspect that our discomfort with people with disabilities may have something to do with our fear of being in that situation ourselves one day. One might imagine that it would make us more compassionate. But denial may be an even more powerful emotion that we trigger when confronted with a circumstance that we are not prepared to confront. If we take to heart the Jewish teaching about every person made in the image of God and recall that one person is no better nor worse than the other, simply "differently-abled" we might be better able to open up our hearts, and our institutions to a wider swath of humanity.

We'd all be better for it.

Postscript: In a notable departure from the minhag (custom) of our congregation, I introduced my dvar torah on the differently-abled with a video which I described as a midrash on Genesis 1:27. I suggested that given the theme of the morning we needed to go beyond the typical left brain, intellectual analysis of an issue based on the teachings of the Torah. Some things are learned through the head; others are learned through the heart. Jewish Disability Awareness Month seemed a ripe time to validate alternate ways of learning and knowing, which is one of the ways that the disabled are distinguished from those of us who are "temporarily-abled". I highly recommend that you view the linked video: