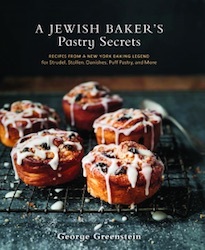 The subtitle of George Greenstein's A Jewish Baker's Pastry Secrets is Recipes from a New York Baking Legend for Strudel, Stollen, Danishes, Puff Pastry, and More. And the title page adds the names "with Elaine Greenstein, Julia Greenstein and Isaac Bleicher" to that of George Greenstein. This is more than a cook book, or culinary arts manual; this is the story of a family of multi-generational bakers, of kids who grew up to be bakers, of a bakery that was part of a community. George Greenstein, the eponymous Jewish baker, is the same Jewish baker who authored Secrets of A Jewish Baker (The Crossing Press, 1993; James Beard Award 1994; second edition Ten Speed Press 2007) decades ago, about when I first started to bake bread seriously. Mr. Greenstein, who wrote his first book after twenty years of running a local bakery in Long Island, died before he could finish this book, so his daughters and his grandson Isaac stepped in when they found George Greenstein's manuscript.

If you've ever lived near a Jewish bakery, or had a family member who baked in the Jewish and Eastern European traditions, you'll find much to love about this book. All your favorites are here (the book opens with a recipe for Rugelach that didn't fit into the chapters as such, and it was pretty hard to not stop and make it right away). While written from the perspective of a commercial baker, the authors are clearly aware that they're writing for home cooks (they tested the recipes in their own kitchens). They open with a chapter describing the basic equipment you really need (none of it at all esoteric). There are a number of practical tips for the home cook, ranging from adjusting the temperature and heat condition of your oven by altering the racks, or compensating for an oven that cooks from the bottom faster than the top by nesting two baking pans, one inside the other, allowing for insulating air space between them, and a number of creative uses for aluminum foil. The suggestions are clearly written with an understanding not only of quality baking, but of the nature of a typical home kitchen. The authors were particularly thoughtful in that the recipes provide ingredient measurement by volume as well as weight (for instance, 8 ounces/22 grams).

The second chapter is on basic techniques and recipes for various fillings and toppings. Subsequent chapters are each dedicated to a specific kind of pastry; Bundt, Babka, Strudel, Gugelhopf and Portuguese Sweet Bread, Stollen and Polish Kolacz, Puff Pastry, Charlotte Dough, Danish Pastries. Each chapter opens with one or more master recipes, followed by detailed step-by-step instructions for various variations. Specific tips and techniques for successful pastry production are included in sidebars, and the instructions are admirably clear. Throughout the book there's an emphasis on using fresh high-quality ingredients, and making elements like toppings and fillings from scratch. The range of recipes and pastries is astonishing; everything from the things you'd expect at a Jewish bakery, as well as delightful surprises like a Polish Easter bread, Portuguese Sweet Bread, Hungarian Cabbage Strudel, and one of the most sensible recipes for Hot Cross Buns I've ever seen.

There's a lot to love about this book, but one of the best parts is the attitude towards pastries and breads; they are meant to be shared, and making them is both a joy and an art. The one thing I kept finding myself wishing for were a few photographs; there are a few recipes (Apple 'n' Cheese Cuts for instance) that would benefit from a photograph of a finished pastry. Were I one of the authors, I'd create a Tumblr or small website featuring images of the various recipes.

Reprinted with permission of the author - Lisa Spangenberg, Sleepinghedgehog.com