Yesterday, I attended the funeral service held for Cardinal
Jean-Marie Lustiger at Notre-Dame in Paris.

It was unlike any funeral I've ever attended, and surely unlike any
service ever held at this cathedral in its 700 years of existence. I
suppose it came as close to ecumenism as one can expect in a Catholic
country.

French president Nicolas Sarkozy flew over from his vacation in
America; Lech Walesa flew in from Poland; several members of the Academie
Francaise showed up in their ceremonial regalia; hundreds of priests from
all denominations attended in their formal vestments.

But the extraordinary break from tradition was the presence of
several dozen prominent members of France's Jewish community, seated
outside the cathedral to hear the Kaddish -- the Jewish prayer for the
dead -- that was intoned before the service began. Lustiger's cousin and
young grand-nephew from Israel brought soil from two holy sites to be
placed in the coffin -- a specific wish of the Cardinal's.

Inside the cathedral a special area was reserved in the front rows
for "the Jewish Community." France's leading Reform rabbi, Daniel Fahri,
was there with his wife, but no Conservative or Orthodox rabbi attended.
"They wouldn't step foot in here," a friend confided to me.

And therein lies the conundrum of Jean-Marie Aaron Lustiger. 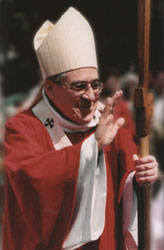 He was born in Paris in 1926 to Jewish immigrants from Poland, and
was named Aaron for his grandfather. When the Germans occupied France in
1940, he and his sister were sent to live with a Catholic family in
Orleans. He missed his bar mitzvah at 13, and decided to convert to
Catholicism, against his parents' wishes. He was baptized at the age of
14, and took the name Jean-Marie.

One might say it was the expedient thing to do, or perhaps the boy
was simply impressionable. But he stayed with his new religion after the
war ended, pursued his studies at Catholic institutions, and was ordained
as a priest in 1954. He had a spiritual crisis in the late 1970s -- he
actually began studying Hebrew and thought seriously about leaving France
for Israel.

But unexpectedly, he was appointed bishop of Orleans, then archbishop
of Paris in 1981, and promoted to cardinal two years later by Pope John
Paul II, with whom he was a close collaborator and confidante. Thanks in
large part to Lustiger's insistence, the Carmelite convent that was rather
indecently built at Auschwitz in 1984 was removed.

Lustiger had a special and tragic connection to Auschwitz -- his
mother had been deported there, and died there. His father and uncle
survived. At his funeral service, several French survivors were present,
one of them carrying the survivors' banner.

"I was born Jewish, and so I remain," Lustiger once proclaimed in an
interview, "even if that is unacceptable to many." While Catholics seem
to accept this with a certain ironic pride, Jews are divided. A former
chief rabbi of Paris once remarked that "a Jew becoming a Christian....is
turning his back on it."

When I asked Rabbi Fahri if he thought one could be both Jewish and
Catholic, he answered enigmatically: "A Catholic can be a Jew, but a Jew
can't be a Catholic." And yet, Lustiger himself felt he was following in
the footsteps of the apostles, who were, like Jesus, Jews.

He was known to chat in Yiddish to close Jewish friends.

And once, after hearing him speak at a press luncheon, I went up to
thank him and boldly said, "You know, you would have made a good rabbi,
too!"