As they often do every weekend, a group of Saudi journalists gathered up at 'The Millennium' -- a local hangout which was once popular for being among the first 'Internet-Cafes' in the coastal city of Jeddah back in the late 1990's.

For this group of television, newspaper and magazine journalists the cafe is known more for its weekly sessions of sipping different types of traditional tea, gossiping and exchanging views on the topics of the hour as large TV screens beamed in the latest news, sports matches and music videos all night long.

However, on that particular Friday evening (October 2, 2009), it was quite clear that there was only one topic to be discussed; everybody in the Saudi Kingdom was talking about the first 'showdown' of its kind for a long time between the press and a senior member of the clergy.

It had been slightly over a week since the 'World leader-studded' inauguration of KAUST (King Abdullah's University of Science and Technology), a massive project which has gained international recognition for the contribution it has pledged to offer in the fields of science and research.

King Abdullah and world leaders at the opening ceremony of KAUST

However, for Sheikh Saad Al Shethry -- a member of the highly respected and influential 'Hayaat Kibbar Al Ulamaa' (Council of Senior Scholars) who has recently been appointed by the Saudi King himself, the 'co-ed' nature (i.e male and female students studying side by side) of the university was apparently too much to handle.

It should be noted that KAUST is the first university to allow such an environment in Saudi Arabia, as traditions in this conservative country meant that for many years, males and females had to study, work and socialize separately. Today women still cannot drive cars and must use a male driver to get around.

Al Shethry appeared on Al Majd, an 'Islamic' channel which allows only men to go on-air, and called for the separation of the two genders at the university, adding that this (mixing) is "not allowed as it could lead on to greater sins and vice." He gave sexual harassment, rape and blackmailing as examples of the evils that could occur in a mixed environment.

This may have very well gone unnoticed if it wasn't for Jamal Khashogji -- the editor of Al Watan, a national Saudi daily which has just celebrated entering its 10th year in publication. 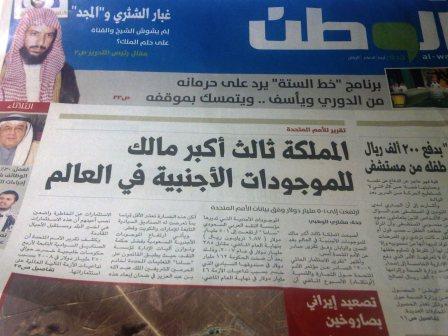 On Tuesday, September 29, Khashogji wrote a column criticizing Sheikh Al Shethry for what he described as an attempt of "interrupting the progress of the nation." He also suggested that remarks such as the ones made by Al Shethry provided ammunition for the arsenal of those who reside in the 'Caves of Afghanistan' who have labeled the country's leadership and many of its citizens as 'infidels.'

Al Shethry quickly wrote to the newspaper saying that it had misquoted him, which triggered Al Watan to reply by posting the actual video of the Sheikh's statements, causing an unprecedented public reaction.

For days, I couldn't believe my eyes as I read several articles in the local Saudi press criticizing Al Shethry and giving religious arguments that 'mixing' between sexes is actually not forbidden in Islam, adding that that there are many incidents mentioned in texts from the days of The Prophet that proves this.

Others distinguished between the concepts of 'Ikhtilat' (mixing) and 'Khilwa' (a one-on-one situation).

Of course, this has caused other writers to claim that this was actually an 'orchestrated' attack by what the Saudi society defines as the 'Liberal Writers.' A columnist in Al Watan itself even wrote describing what happened as 'a liberal feast' and said he would have preferred his editor in chief (Khashogji) didn't criticize the Sheikh in the way he did.

Back at the 'Millennium Cafe', the debate took much greater depth, "For God's sake, KAUST is a place of academia ... a beacon of knowledge, how could someone equate it to a bedroom?", one journalist said.

Others argued that it's about time somebody realized the amount of waste of building two sections of everything: One for males and another for females.

The debate reached its climax when one of the journalists received a text message on his mobile phone, it turned to be a joke so he laughed and read it out:

"Quick, make use of the exceptional freedom of speech season ... last chance to criticize the religious establishment and discount on punishments is tonight."

Everyone at the table laughed though they feared the subliminal message behind this joke is true, for it is well-known that Clerics and the Saudi religious police have long benefited from unmatched government support.

Yet, to everybody's astonishment only two days later (Sunday, October 4) the news broke that Al Shithry had resigned from the Council (or was asked to resign according to another version).

I quickly thought to myself that KAUST could actually brag that on its first week it gave a great lesson in accountability and research before making statements, particularly if you are an authoritative figure.

This also could be looked at as a valuable lesson for Saudi journalists who often shy away from confronting sensitive social matters; the lesson is of course very basic, had Al Watan's article not been properly documented and backed by evidence, this whole issue would have been dismissed and it could have been the editor who would have been asked to resign.

Yes, you could say that journalism is also a science.