It's not every day that a former national security advisor recognizes you, taps you on the shoulder and apologizes for not returning your calls.

But that's exactly what happened to journalist Shane Harris in March 2004 at a small, invitation-only discussion on homeland security at Syracuse University. Harris was scheduled to discuss the media's role in homeland security. Former National Security Advisor to President Ronald Reagan John Poindexter was also scheduled to attend.

Harris was eager to meet Poindexter, a key figure in the Iran-Contra scandal who Harris had tried and failed to interview many times before while writing for
Government Executive
magazine.

"As enticing as it is to go up to Syracuse in late winter, I decided to go because I saw his name on the list," Harris told NYPL. "I'd seen one or two pictures of him since Iran-Contra. It's kind of like JD Salinger. There's very little information about him out there, but I was pretty sure I knew what he looked like."

Turned out, it didn't matter.

"All of a sudden, I hear this voice say behind me say, 'Shane Harris,'" Harris said. "I turned around and it was him. I said, 'Wow, John Poindexter. Nice to meet you.' He apologized to me that he had to turn down all of my requests for interviews. So he was fully aware I had asked. He explained that the press office at the Pentagon said, 'No press for you.'"

Poindexter had been working as head of the Defense Advanced Research Projects Agency's (DARPA) Information Awareness Office, developed after 9/11 to track terrorists. It came under harsh criticism for violating privacy and civil liberties.

Harris, who was placed on the technology and security beat after 9/11, wrote on the topic regularly. 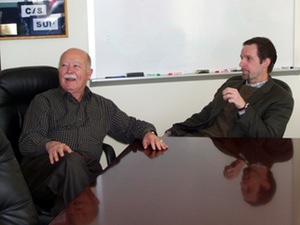 Poindexter told Harris that he had "read everything" he had written, and Harris said, "It was good to know that everything I was writing was not going on in this vacuum. He said, 'I thought you were completely fair and I thought you were trying to figure out what we were doing. And I appreciate that.' It was very encouraging."

It was two weeks after that meeting that Poindexter told Harris he would actually grant him an interview, but on one condition.

"He said, 'You have to come out to my house for multiple times for two hours. Everything I say is on the record, and it must be taped,'" Harris recalled. "I thought, you don't know how reporters work if you think this is an onerous request."

They did four or five interviews for a magazine piece, and then Poindexter asked, "Are you interested in doing a project beyond this?"

The answer -- yes. The result -- The Watchers: The Rise of America's Surveillance State, the winner of the Library's coveted 2011 Helen Bernstein Award for Excellence in Journalism, presented on June 7.

The book, published by Penguin Press, isn't a biography of Poindexter, but a piece on the history of surveillance, and the slippery slope between protecting the country and invading people's privacy. It starts back before Iran-Contra, mentions the scandal, and winds up in modern times.

But Poindexter was a key source for the book, Harris explained.

"We set up this file sharing system, like a bulletin board," he said. "It was really cool to have this sort of living piece of history I could kind of ping whenever I needed... It was really neat, when [President Ronald] Reagan died, I immediately emailed him and asked for this thoughts."

Over the course of writing the book, Harris asked Poindexter if he would have done anything differently with Iran-Contra, what would he have done.

"I was expecting to hear, well, maybe we shouldn't have done it," Harris said. "But he said he would have come up with a better public relations strategy, because we knew if it ever got exposed that we would have an extremely difficult job of explaining it to people. He started literally drawing on a piece of paper the entire scheme, and it was extraordinarily complicated. And it frustrates him to this day that they did not have the chance in full to explain what they were trying to do. He realized fully that on its face it would look like a betrayal of the president's promise to negotiate with terrorists."

Harris said he "laughed with him and ripped him that he didn't see at all why people find that troublesome. He said I intellectually understand, but I just don't see it that way."

Harris may have his opinions, but they did not show up for almost any of the book. Despite the very sensitive and potentially controversial topics he explored in the book, Harris wrote it without any clear bias.

"I wanted the story to speak for itself," said Harris. "I didn't want to steer the reader in any one direction. So many times this debate gets polarized from the outset and everyone retreats to their individual camps. I don't think that leads to good policy decisions."

"When I was in college, I studied screenwriting, playwriting and sketch comedy writing," Harris said. "My background is fiction writing. So throughout this book, there is comic relief. I was very conscious that you have this really heavy deep story, and it's often very depressing, and you have to give people a moment to lighten up. Mike McConnell, he's a pretty funny guy. I find a lot of people who have been in Washington for a long time find ways to cope with all the stress with these anecdotes. That's how you stay sane. So I tried to convey that by punctuating the story with these anecdotes."

Harris said tries "not to be depressed about the state of journalism," and said, "I do feel, particularly in Washington, that we're too quick to look for the easy storyline, collective wisdom and boilerplate explanations. I don't believe we're really focused enough on informing our readers about what's really going on. We're way too caught up in the political horserace... I think people are distracted. There's this notion that news is always, always happening. News does not happen, or at least significant news, doesn't necessarily happen every single day, and every single hour. There are plenty of outlets out there that feed on that idea.

"I think long form journalism can make a real contribution to that problem, not only by giving enough words, but by pushing things out when they're really ready and not now, now, now. Long form journalism gives us an opportunity to step back, take a breath and get it right. Magazines and books are the refuge for those who want to think.

"It sounds like a dirty word these days because it sounds like you're slowing down. It's really sad. It's also wrong. In the long term, books and magazines will continue to drive the conversation."

Harris said the Bernstein Award -- which honors long form reporting in books -- "shows that great journalism is being produced, and far from being dead, this medium of long form is thriving. It's really important that an organization like The New York Public Library highlights that."