As of July 2014, astronomers have discovered 1,739 confirmed exoplanets and 452 multiplanet solar systems. There are also an additional 4,234 unconfirmed planets detected by the NASA Kepler observatory. According to their sizes, the confirmed planets include 107 that are Earth-sized. About 47 of all confirmed planets are located in the habitable zones of their stars -- the distance from a star where liquid water might pool on the surface.

Let's take a look at one of the most intriguing ones that is both Earth-sized and in the habitable zone of its star. It's called Kepler-186f, which means its the fifth planet (b, c, d, and e are the others) orbiting the star Kepler-186. 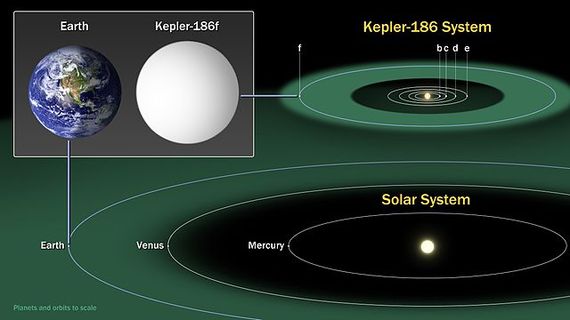 Known only by its catalog number, it has no name yet, but we know quite a bit about it already. It orbits a dim red star about 490 light-years from our Sun, in the constellation Cygnus. It has a year that is 130 Earth days long, at a distance similar to Mercury's from our own sun. Yet even from this proximity, at its surface the planet only gets about one third the sunlight that Earth does. If you were to set up a rooftop solar panel system to create electricity, the panels would have to occupy nine times the area of a similar system on Earth just to get the same amount of power.

The planet is actually located near the outer edge of its star's habitable zone, under conditions much like our own planet Mars. Enough sunlight heats its surface that liquid water could exist. Kepler-186f is about 11-percent larger in radius than Earth and has a mass about 1.44 times that of Earth. This means that if you weigh 150 pounds on Earth, you would weigh about 175 pounds there as you watched the dim red sun Kepler-186 in the sky.

Kepler-186f is far enough from its star that gravity probably would not have locked the planet's rotation so that it would always have the same side facing its star. But the planet would probably still rotate much more slowly and have a longer day than Earth -- perhaps weeks long. If it has an atmosphere as dense as Earth's with a hint of carbon dioxide, it could be a comfortable world, with surface temperatures above 32 degrees Fahrenheit. But with a thicker atmosphere like Venus, it could also be a deadly 500-degree-Fahrenheit hellhole! We just don't know yet.

This rocky planet probably has a molten outer core like our Earth, so it can generate a protective magnetic field, but because the planet rotates so slowly, the field is much weaker than Earth's. This means that any atmosphere it may have could eventually leak away as the solar wind from its star slowly strips away the atmosphere over time. Some volcanism could help replenish it, so it's an interesting race between two opposing processes to sustain an atmosphere over the eons.

Because its star is a red dwarf, the star emits very little ultraviolet light, so unlike on Earth, there may not exist a thick ozone layer. More importantly, there is no source of energy to drive organic chemistry leading to life on its surface. Sufficient energy might exist in underwater vents like those found deep in Earth's oceans, but this greatly reduces the volume of water where chemistry could lead over time to the first replicating molecules. It could be an ocean world frozen forever at the cusp of creating the first living systems, but without enough energy from sunlight on the planetary scale to push the right sequence of reactions over the threshold where larger replicating molecules like RNA and DNA could form. 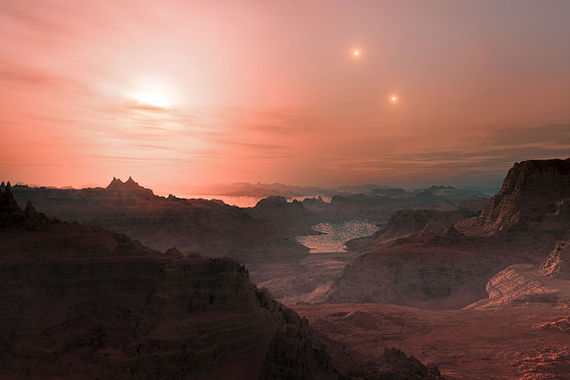 Meanwhile, the star also hosts four additional planets (186b, 186c ,186d and 186e), though they are all closer to the star than Kepler-186f and are too hot to have liquid water. These four planets have lost the gravitational sweepstakes and are tidally locked, which means the same side of each planet always faces the star, in perpetual daylight. Surface temperatures are well above 200 degrees F all the time, under a blistering red sun that always stays in the same spot in the sky. With atmospheres, the temperatures could be even higher!

There are still thousands of other candidate planets that we know about, so the hunt for more twins to our own Earth continues. The biggest new challenge is to detect and measure the atmospheres of these planets to search for biosignature compounds like ozone and oxygen. Once those are discovered, we will know with certainty that some kind of life exists there, but because distances are so great, we will never be able to see what kinds of life have emerged: bacteria or dinosaurs? That remains the biggest frustration in the search for life beyond our solar system.

Given that it's so far from Earth, we will never be able to send a space probe to visit any of these intriguing worlds. The travel time by conventional chemical or ion rockets would take millions of years, so we will have to study them using telescopes. Knowing that these habitable planets exist and may even bear life but never knowing its precise form will remain a source of great frustration for future humanity.

The kind of human civilization needed to attempt star travel, whether robotically or with humans, does not exist, nor are there any historical templates for what such a human civilization needs to look like to make this kind of centuries-long dedication happen. Not even the single-minded toiling of the ancient Egyptians with their pyramids, or the Druids with their Stonehenge, serves as a guide. Perhaps only the recognition of a planetary, extinction-level event will galvanize humanity to become the kind of self-sacrificing civilization that can embark upon these kinds of journeys, despite the fact that not all humans can be saved by the effort.

But for the time being, we can still gaze through our telescopes at these intriguing orbs, keep careful records of the habitable and life-supporting worlds we find, and wonder at the amazing possibilities they imply.