On Saturday March 19, 2016, while political pundits chased their tails debating the significance of Donald Trump's prediction of riots, Mitt Romney's support of Ted Cruz, and whether Merrick Garland would be more or less liberal than someone Hillary Clinton might nominate to the Supreme Court, a kettle of Swainson's hawks circled above California's Anza-Borrego desert.

According to Wikipedia, a kettle is a term that describes "a group of birds wheeling and circling in the air" and in some species is "a way of 'staging' a flock in readiness for migration." Somehow these hawks wheeling and rising on hot air coming out of the valley seemed vaguely reminiscent of the state of national politics. 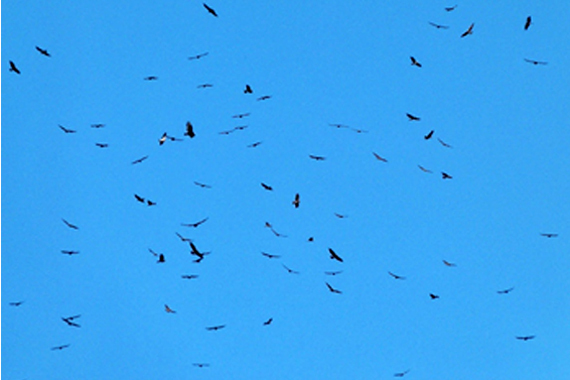 Of significance, Swainson's hawks journey from as far away as Argentina and campaign their way as far north as Alaska. Some of the hawks come from Mexico, crossing the border unheeded, and, ironically, doing the hard work in the Borrego Valley that other birds seemingly disdain, munching on sphinx moth caterpillars intent on eating desert plants flowering from meager spring rains. 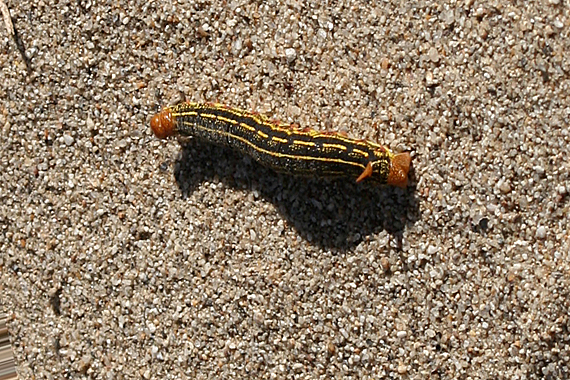 The hawks clearly were collecting enough contributions of caterpillars to sustain them through the next leg of their campaign to the counties and states to the north. According to the University of Nebraska, the name "Sphinx" moths was coined in 1758 by Carolus Linnaeus, often called the "Father of Taxonomy," "probably based on the habit of the larva rising up in a defensive position when startled, thus loosely resembling the Egyptian Sphinx," a symbol of wisdom and strength. This is not unlike the politicians in this year's race for president who also attempt to show strength and wisdom, sometimes in surprising ways.

The hawks are as ever-present and as ephemeral as the candidates themselves. They rise in their kettles hundreds at a time, and, fittingly, on the previous Sunday (March 13, 2016) 1,407 had appeared, more than enough Swainson's hawks for each delegate a Republican nominee will need to win and the second largest day ever recorded in the valley.

Swainson's are of the genus buteo, broad-winged, soaring hawks. This year the hawks are clearly polarized. Some groups are a dark morph and others are a light morph, the ying and yang of buteos, or the right and left, depending on your fancy. 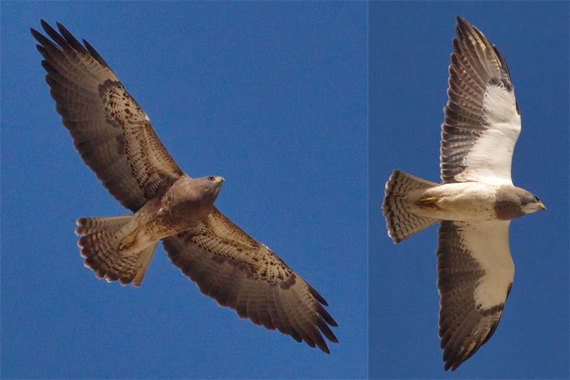 The uninitiated find it fascinating that the hawks have lowered their standards to hopping around on the desert floor eating caterpillars rather than gracefully diving on the more exotic rodents one imagines large hawks might prey on. This is not unlike the lowered standards of some political discussions in the 2016 presidential race.

The hawks rise up and swirl on their four-foot-wide wings, and the small crowds watching them "ooh" and "aah," declaring how many they can see at one time. They count the birds as they pass through an imaginary plane in the valley to avoid tallying any bird more than once. No mistakes at this polling place. 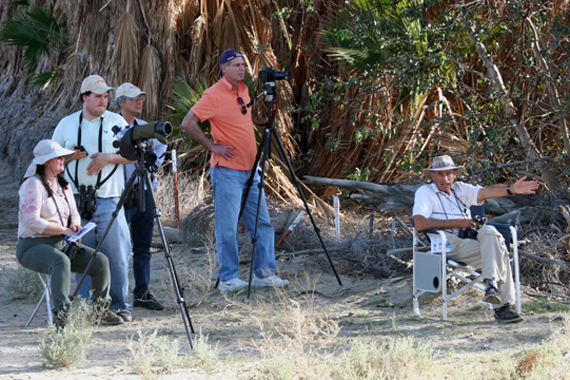 Like paparazzi with their long camera lenses and spotting scopes, these bird watchers and researchers could be thought of as hawk pundits. They scatter across the valley to the likely spots where the hawks will settle to the ground to munch on caterpillars, roost for the night, or rise up to form a kettle.

The hawk pundits actually do great work, reporting their research findings daily to the Hawk Migration Association of North America, adding to the data available about migratory hawks. Like political pundits, they are on the run, calling each other on cell phones and moving quickly from one part of the valley to the other, dashing to where the last reported hawks were seen. They talk among themselves and to the tourists about where hawks might go next, what they might be doing and why. Conducting hawk policy discussions or polls, no less.

We followed the advice of the pundits and periodically moved to where they advised that the birds might be. On one jaunt to the west we discovered sculptor Richard Breceda's 140 metal sculptures dotting the desert in Galleta Meadows. These sculptures were the brainchild of the late Dennis Avery who wanted visitors to be able to see representations of historic animals that once lived in the valley, some found there now, and some of the people who contributed to the history of the area.

There are donkeys, bighorn sheep, camels, mammoths, explorers, a giant scorpion and a velociraptor. None of the sculptures is more impressive than the 350-foot serpentine sea dragon. The dragon has little basis in reality, not unlike some campaign rhetoric. Rising angrily out of the desert, the serpent seems somehow symbolic of the voters supporting Donald Trump and Bernie Sanders who are tired of the same-old, same-old in national politics. 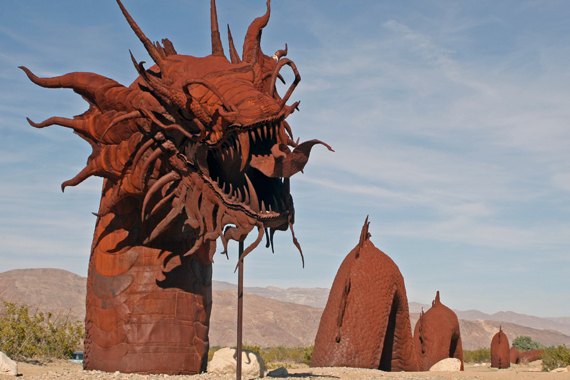 There were no hawks to be found near the serpent, so we headed back to the view site for the nightly roost, where the birds had reportedly been settling in each evening in a stand of eucalyptus trees.

Several dozens of us gathered round, searching the skies for birds as the sun set, squinting into the bright light above the San Ysidro Mountains west of Borrego Springs. The hawks appear in large numbers and then disappear, sometimes gone for hours only to reappear, one by one, thousands of feet in the air, before settling to their nightly roost.

Two couples in flip flops and shorts who had come over the mountains from the coast settled in for the wait with crackers and cheese and glasses of cabernet. Others climbed a nearby sand dune, and those with equipment stared through their scopes and lenses, hoping to be the first to see the hawks. 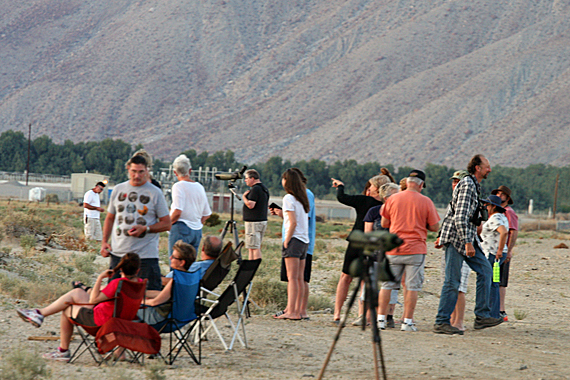 Of course, conversations developed while we waited. What was the best route back over the mountains? Where did you last see the birds? It seems flyfishing for trout and hawk-watching have something in common, so rivers became a topic in this land of perpetual drought. And then it turned to politics. A Bernie fan laughing when his friend labeled him as a Trump supporter, and then the common refrain started as it has in so many other conversations around the country - why can't we just work on solving problems instead of filling the void with hate, disparagement and blame?

And still there were no hawks ... the sun was down, and we were leaving, disappointed at having missed the birds, when a shout went out. The birds were coming. 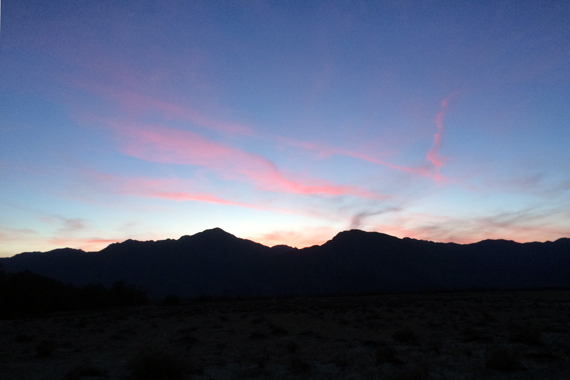 We turned back from our car, opened our tripods, and watched the hawks rise above the darkness of mountain ridges, small dots thousands of feet high, silhouetted against fading blue sky and pink streaks of cirrus clouds - to the excited voices of those counting the birds and sharing their scopes with those lacking them.

Then the hawks dropped quickly out of sight, silhouettes lost in the black of the mountains, heading for their roosts, one-by-one, releasing the watchers until dawn when the birds will rise once again into their kettles and begin circling before campaigning northward while the hawk pundits chatter in the valley. 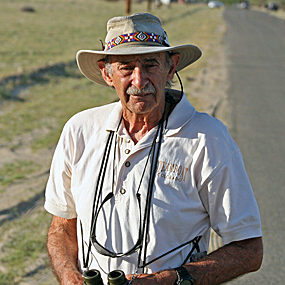 NOTE: Despite the light-hearted tone of this blog, I have great respect for the hawk watchers, the hawks, and the work being done to understand the hawk migration. Researcher Hal Cohen founded Borrego Valley Hawk Watch in 2003 after Swainson's hawks began to appear while he was watching the turkey vulture migration. Each day during the spring migration, volunteer researchers collect data and report it to the the Hawk Migration Association of North America. with assistance from the U.C. Irvine Steele/Burnand Anza-Borrego Desert Research Center. Hal is a great resource who shares his knowledge and joy with visitors to the valley who come to watch the hawks. He is the head hawk pundit! KFMB-TV San Diego aired an interview with Hal on March 15, 2016. Thanks to Borrego Valley Hawk Watch for contributing several photos to this blog as credited above. All other photos are by the author.